A new method of birth control for men currently being tested by couples can boost muscle but also trigger acne flare-ups, scientists warn.

Researchers testing the contraceptive gel – which is rubbed onto a man’s shoulders – believe it will be more effective than condoms.

The clear gel, which is absorbed after applying it to the man’s arm or shoulder, reduces the amount of sperm a man produces.

In an earlier trial of the gel, some men gained weight, although mostly in muscle, and other men who had trouble with acne as a teen had recurrences.

‘The potential of this new gel is huge,’ said Dr William Bremner, of the University of Washington – one of the universities involved in the study. 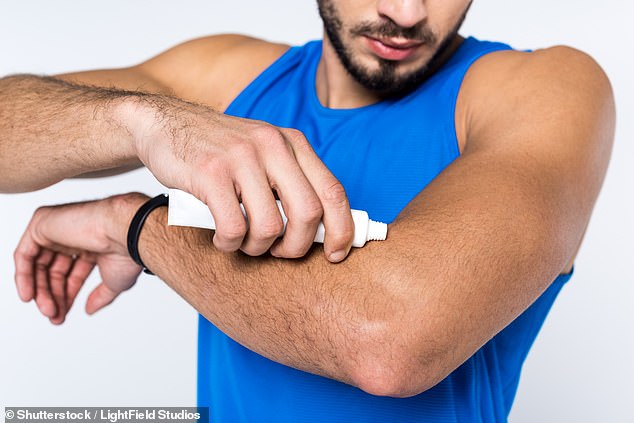 Currently, the only approved male contraceptives are condoms or vasectomies, surgical procedures to block sperm.

There are myriad forms of birth control for women and they often come with complicated and disruptive side effects.

If it proves safe and effective, it would be the first new birth control for men since the condom was introduced in the 1800s.

The National Institutes of Health-funded trial is recruiting 420 couples to test the gel over the next three years.

The University of Washington is one of three institutes recruiting couples to try out the birth control gel, called NES/T.

Dr Bremner added: ‘There is a misperception that men are not interested in, or are even afraid of, tools to control their own fertility. We know that’s not the case.

‘Among other things, there’s been a perception that pregnancy is ‘the woman’s problem’, in some people’s view.

‘Attitudes have changed in both men and women in what they find acceptable. We think the time is right. People are ready for it.’

NES/T contains two hormones – progestin and testosterone – that are absorbed through the skin when the gel is rubbed onto a man’s back and shoulders.

DOES HORMONAL BIRTH CONTROL INCREASE A WOMAN’S RISK OF DEPRESSION?

Contrary to popular belief, contraceptive pills, implants or injections do not make women more likely to suffer from the mental-health condition, a study found.

‘Based on our findings, this side effect shouldn’t be a concern for most women, and they should feel comfortable knowing they’re making a safe choice.’

The researchers blame platforms such as social media for making contraception complications seem more common than they are.

Dr Worly said: ‘We live in a media-savvy age where if one or a few people have severe side effects, all of a sudden, that gets amplified to every single person.

‘The biggest misconception is that birth control leads to depression. For most patients that’s just not the case.’

The scientists add, however, certain women are at a greater risk of the mental-health disorder and should be monitored closely.

Dr Worly said: ‘Adolescents will sometimes have a higher risk of depression, not necessarily because of the medicine they’re taking, but because they have that risk to start with.

‘For those patients, it’s important that they have a good relationship with their healthcare provider so they can get the appropriate screening done – regardless of the medications they’re on.’

The researchers reviewed thousands of studies investigating the link between contraceptives and people’s mental health.

Such studies included various methods of contraception, including injections, implants and pills.

Participants in the trials were made up of teenagers, women with a history of depression and those who had given birth in the past six weeks.

Progestin – found in most hormonal female birth controls – naturally blocks the action of testosterone, keeping the testes from producing sperm.

But testosterone is also key to male physical features and sex drive, so the gel also delivers a dose of replacement hormone.

The gel is anticipated to be more than 90 per cent effective, making it roughly three per cent more reliable than condoms.

The participants, in Seattle, Los Angeles and Kansas, will apply the gel to their shoulder or arm once a day.

Within eight to 16 weeks, the sperm count is predicted to be low enough to prevent pregnancy.

At this point, the couples will test the gel as their only method of birth control for a year.

The current trial started on November 28. The results are expected by 2020.

Researchers have plans to later include participants from Chile, England, Italy, Kenya, Scotland and Sweden.

The effects of the gel are reversible within three to four months of use, bringing sperm production to the man’s normal level, the researchers said.

If the trials are successful, the substance may become available to couples, who have been relying on women’s options such as the Pill, within 10 years.

‘We are neglecting fifty per cent of the population with our current methods,’ Dr Stephanie Page, of the UW School of Medicine, told The Seattle Times.

‘There’s every reason for men to be more engaged.’

The female pill is used by more than 100million women worldwide, but researchers have been trying to develop a male version for decades.

But the search for a male contraceptive has been beset by difficulties. Many attempts have had an impact on libido, while others had affected virility.

NES/T has been in development for over a decade by NIH and the Population Council, an international non-profit focused on reproductive health.

Creating a new birth-control is time consuming for scientists because dampening the negative side-effects are crucial.

Currently for women – who say they should not have all the responsibility for family planning, these can include low sex drive, weight gain or skin issues. 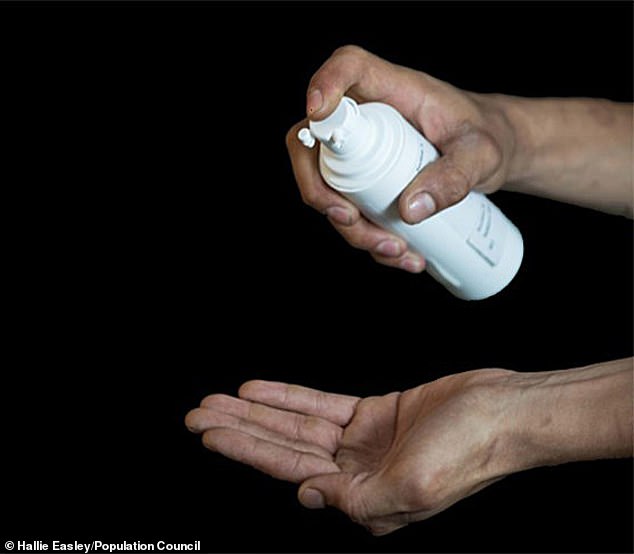 The gel, pictured, has been in design for ten years, as scientists have wanted to minimise negative side effects as much as possible

Condoms themselves fail us only occasionally, but people fail to use them correctly much more often, leading to a failure rate of about 13 percent.

Failure to use a condom at all or to use one properly is a primary reason that 45 percent of pregnancies in the US are unwanted or unintended.

Researchers at the UW School of Medicine have previously trialed a contraceptive pill for men, called dimethandrolone undecanoate, or DMAU.

Taken once a day like its female counterpart, the pill was found to lower level of testosterone and two other hormones required for sperm production.

The results, published in March, showed that a month-long use of the pill dropped hormones with few side effects.