Regulators have recalled thousands more blood pressure pills from pharmacies amid fears they could cause cancer.

All the products pulled by the Government-run body as a ‘precautionary measure’ are made by Actavis, now known as Accord. 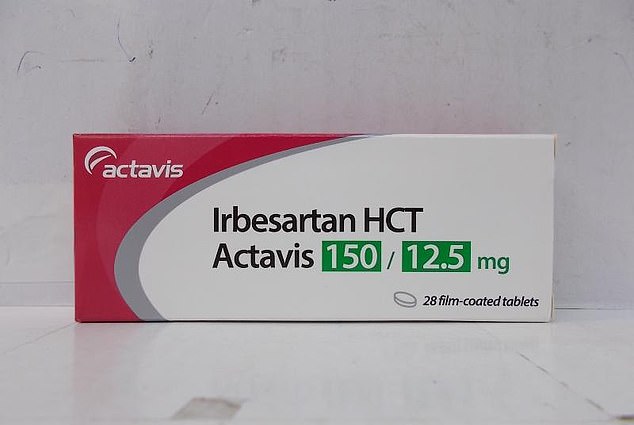 The MHRA, which polices the safety of medical products, said they were recalled due to possible N nitrosodiethylamine (NDMA) contamination.

NDMA – once used in rocket fuel – is thought to be carcinogenic, meaning it could cause cancer in humans.

The warning by the MHRA, issued today, follows the worldwide recall of another blood pressure drug, Valsartan, last July.

Seven batches of the drug, made by Actavis and Dexcel Pharma Ltd, were initially recalled.

The MHRA issued another recall of more batches of Valsartan containing medicines made by Mylan and Teva in November for another chemical.

The MHRA has now urged patients to not stop taking their medication, on the back of the new irbesartan alert.

In strict guidance issued to pharmacists, regulators told them to stop supplying the affected batches ‘immediately’.

The warning continued: ‘Quarantine all remaining stock and return it to your supplier using your supplier’s approved process.’

The MHRA insisted there is ‘no evidence’ the impurity has caused any harm to patients and it reiterated that not all irbesartan products are affected.

NHS figures reveal more than 2million prescriptions for drugs containing irbesartan were dished out in England in 2017.

Dr Sam Atkinson, MHRA’s Director of the Inspection, Enforcement and Standards Division said: ‘Our highest priority is making sure the medicines you take are safe.

‘Our investigation into potential contamination of sartan containing medicines, including irbesartan, is ongoing.

‘At present, there is no evidence that medicines containing NDMA or NDEA have caused any harm to patients.

‘Because of the risk associated with suddenly stopping high blood pressure medication, people are advised not to stop any treatments without consulting their doctor or pharmacist.’

The MHRA said it was ‘working closely’ with the European Medicines Agency to conduct a thorough investigation over how the impurity occurred.

In the wake of the emerging scandal last year, the EMA said routine tests carried out by Zhejiang Huahai did not detect NDMA because it was an unexpected impurity.

Officials added at the time that the manufacturing changes introduced in 2012 by the Chinese firm were believed to have produced NDMA as a by-product.