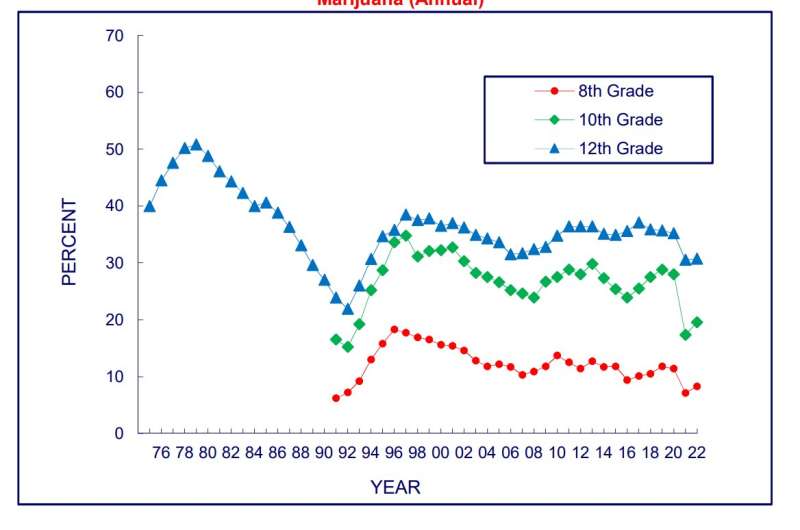 The percentage of adolescents reporting substance use in 2022 largely held steady after significantly declining in 2021, according to the latest results from the Monitoring the Future survey of substance use behaviors and related attitudes among eighth, 10th, and 12th graders in the United States.

Reported use for almost all substances decreased dramatically from 2020 to 2021 after the onset of the COVID-19 pandemic and related changes like school closures and social distancing. In 2022, reported use of any illicit drug within the past year remained at or significantly below pre-pandemic levels for all grades, with 11% of eighth graders, 21.5% of 10th graders, and 32.6% of 12th graders reporting any illicit drug use in the past year.

The Monitoring the Future survey is conducted each year by researchers at the University of Michigan, Ann Arbor.

“The Monitoring the Future Survey is one of the best and most timely tools we have to monitor and understand changes in substance use among young people over time, including through historic events such as the COVID-19 pandemic,” said Nora Volkow, M.D., NIDA director. “It is encouraging that we did not observe a significant increase in substance use in 2022, even as young people largely returned to in-person school, extracurricular activities, and other social engagements.”

The Monitoring the Future survey is given annually to students in eighth, 10th, and 12th grades who self-report their substance use behaviors over various time periods, such as past 30 days, past 12 months, and lifetime. The survey also documents students’ perception of harm, disapproval of use, and perceived availability of drugs. Notably, the survey results are released the same year the data are collected.

From February through June 2022, the Monitoring the Future investigators collected 31,438 surveys from students enrolled across 308 public and private schools in the United States. The completed survey from 2022 is nationally representative and represents about 75% of the sample size of a typical year’s data collection.

The Monitoring the Future investigators noted that schools opt-in to participate in the survey, and some schools that normally participate opted-out this year as they continued to operationally recover from the pandemic. All participating students took the survey via the web—either on tablets or on a computer—with between 95-99% of respondents taking the survey in-person in school.

The survey found that adolescents most commonly reported use of alcohol, nicotine vaping, and cannabis in the past year, and levels generally held steady with those reported in 2021. For substances where reported past-year use did increase between 2021 and 2022, the vast majority of reported use remained at or below the pre-pandemic levels observed in 2020. Compared to levels observed in 2021, data reported in 2022 show:

Though the data have indicated stable or declining use of illicit drugs among young people over many years, other research has reported a recent dramatic rise in overdose deaths among young people ages 14-18. This increase is largely attributed to illicit fentanyl, a potent synthetic drug, contaminating the supply of counterfeit pills made to resemble prescription medications like benzodiazepines, ADHD medications, and opioids.

“The proliferation of fentanyl in the drug supply is of enormous concern. Though the data indicate that drug use is not becoming more common among young people than it has been in the past, the tragic increase in overdose deaths among this population suggest that drug use is becoming more dangerous than ever before,” said Dr. Volkow. “It is absolutely crucial to educate young people that pills purchased via social media, given to someone by a friend, or obtained from an unknown source may contain deadly fentanyl.”

The results were gathered from a nationally representative sample, and the data were statistically weighted to provide national numbers. This year, 11% of the 12th grade students who took the survey identified as African American, 22% as Hispanic, 5% as Asian, 1% as American Indian or Alaska Native, 47% as white, 1% as Middle Eastern, and 14% as more than one of the preceding categories.

“We were curious to see whether the significant decreases in substance use we observed last year would continue into the future, and we now see that there may indeed be a longer lasting impact for some substances,” said Richard A. Miech, Ph.D., team lead of the Monitoring the Future study at the University of Michigan.