Smokers and ex-smokers are overestimating how harmful vaping is, a study suggests.

Previous research from the same team, at King’s College London, suggests the proportion of people with accurate knowledge is dropping.

Misconceptions are more common among smokers and researchers say they may avoid quitting because they don’t believe vaping is any healthier.

Experts have said people are unaware that it not nicotine – found in both e-cigarettes and tobacco smoke – that cause disease, but the chemicals in cigarettes. 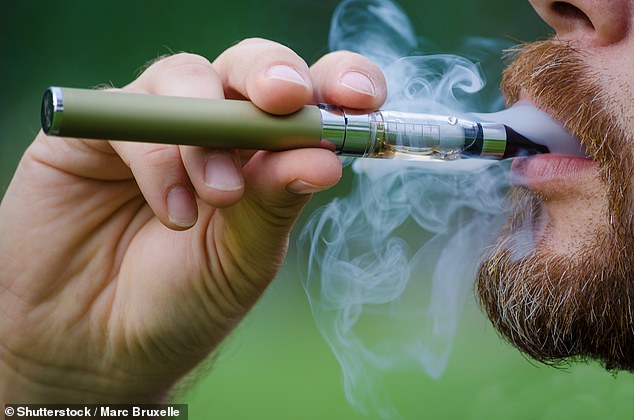 Fewer than six in 10 people surveyed accurately believed that e-cigarettes are less harmful than tobacco cigarettes, a study by King’s College London found

They aimed to judge how much people know about nicotine and how harmful they think smoking, e-cigarettes and nicotine replacement therapy (NRT) are.

When asked about the relative harms of e-cigarettes and tobacco cigarettes only 57.3 per cent correctly said vaping was less harmful than smoking.

Just below 22 per cent said the two were equally harmful, a figure which has risen steadily from 9 per cent in 2012.

Of those surveyed, 3.3 per cent said vaping was more harmful and 17.6 per cent didn’t know.

Knowledge about nicotine was discovered to be particularly poor – nearly nine out of 10 wrongly attributed a greater portion of the risk of smoking to nicotine.

Nearly four out of 10 thought nicotine is what causes cancer from smoking.

Lead researcher Dr Leonie Brose said: ‘Tobacco cigarettes kill over half of those who smoke long-term, yet very few people know that nicotine is not the direct cause of smoking-related death and disease.

‘We found those people who think nicotine is to blame for harms from smoking are more likely to think e-cigarettes and NRT (nicotine replacement therapy) are just as bad as smoking.’

Smokers who have never vaped were more likely to have misconceptions, which the researchers worried makes them less likely to give up smoking.

Dr Brose said: ‘It is possible that smokers may not try e-cigarettes or NRT due to inaccurate beliefs about nicotine and vaping.

‘A lot of public discussion and media reporting focuses on harms from vaping, but we rarely see any reports on how deadly smoking is – 1,500 people die from smoking-related illness every week in England alone.

Smokers who had tried vaping or did so regularly are more likely to say nicotine carries small health risks.

Professor Linda Bauld, from Cancer Research UK, said: ‘While nicotine is addictive, it’s the cocktail of 5,000 different chemicals released during smoking that damages our DNA and can cause cancer.

‘Nicotine products have been proven to help smokers quit and they’re most effective when combined with behavioural support from stop smoking services.

‘It’s vital that smokers aiming to quit have accurate information to help them find the best way to stop.’

Martin Dockrell from Public Health England added: ‘There is still work to do to reassure smokers that vaping, while not risk-free, is much less harmful than smoking. If you smoke, switching to an e-cigarette could save your life.’

Around three million adults in Britain have used e-cigarettes in the decade or so they have been on the market.

Health experts are divided on the gadgets, which are thought to have helped 22,000 people quit smoking each year.

They are thought to be much safer than smoking tobacco but some health bodies, such as NICE, say the evidence is so far too weak to recommend them over counselling or nicotine patches.

What is an e-cigarette and how is it different to smoking tobacco?

An electronic cigarette (e-cigarette) is a device that allows users to inhale nicotine by heating a vapour from a solution that contain nicotine, propylene and flavourings.

But while they have been branded as carrying a lower risk than cigarettes, an increasing swell of studies is showing health dangers.

E-cigarettes do not produce tar or carbon monoxide, but the vapor does contain some harmful chemicals.

Nicotine is the highly addictive chemical which makes it difficult for smokers to quit.

Very similar to normal e-cigarettes but with sleeker design and a higher concentration of nicotine.

Thanks to its ‘nicotine salts’, manufacturers claim one pod delivers the amount of nicotine as a pack of cigarettes.

It is composed of an e-cigarette (battery and temperature control), and a pod of e-liquid which is inserted at the end.

It is known as a ‘heat not burn’ smokeless device, heating tobacco but not burning it (at 350C compared to 600C as normal cigarettes do).

The company claims this method lowers users’ exposure to carcinogen from burning tobacco.