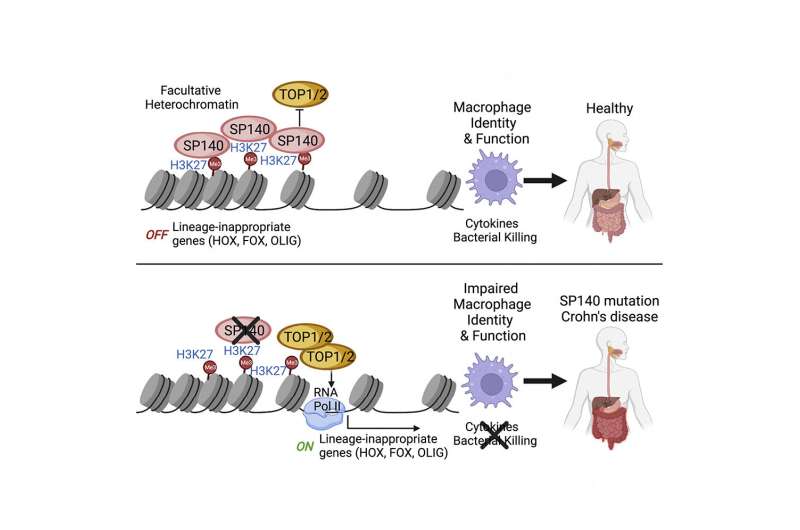 The structure of chromatin—the mixture of DNA and proteins that form chromosomes—can affect gene expression, and certain chromatin “readers” are important for monitoring this structure often in response to environmental cues.

Mutations within one such reader, called Speckled Protein 140 (SP140), are associated with an increased risk of certain immune diseases, including Crohn’s disease, a type of inflammatory bowel disease.

New research led by investigators at Massachusetts General Hospital (MGH) and published in Cell provides insights into the mechanisms behind this link, pointing to potential therapeutic targets.

SP140 expression is uniquely restricted to immune cells such as macrophages, which surround and kill microorganisms, remove dead cells, and stimulate the action of other immune cells.

Protein analyses by Kate L. Jeffrey, Ph.D., a principal investigator of immunology at MGH and an associate professor of medicine at Harvard Medical School, and her colleagues revealed that SP140 represses topoisomerases (TOP), which are enzymes that help DNA untangle during replication.

The team also found that in humans and mice, SP140 loss resulted in unleashed TOP activity, ultimately leading to defective gene expression and bacterial killing by macrophages that caused intestinal abnormalities. Inhibiting TOP rescued these defects in mice with inflammation characteristic of Crohn’s disease, a condition that remains incurable by surgical or therapeutic interventions.

“The work broadens our understanding of epigenetics in health—or the physical changes in cells’ DNA structure that affect the expression of genes in response to environmental cues. Importantly though, it revealed how dysregulation of epigenetic factors drive diseases such as Crohn’s that are rising in incidence because of the complex interplay of genes plus environment.”

Several TOP inhibitors are approved for the treatment of certain cancers, and many in the drug class are being tested in ongoing cancer clinical trials. These latest findings indicate that clinical trials should also test their effectiveness against Crohn’s disease.