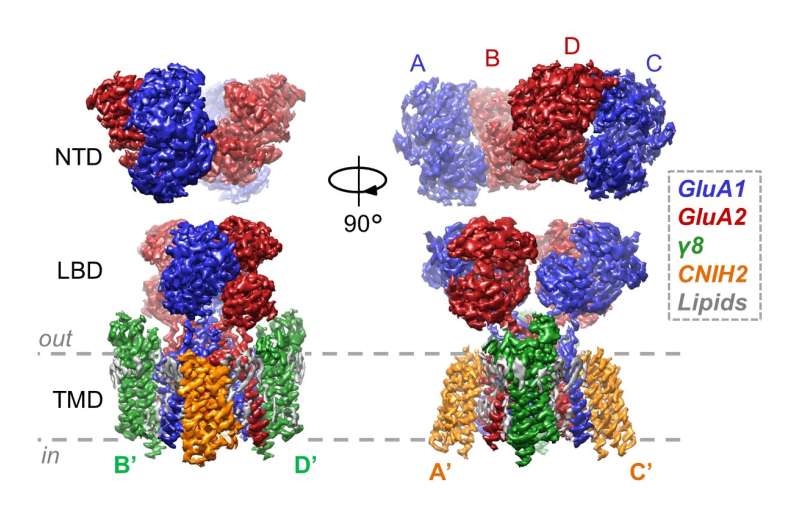 Our brains are made up of networks of neurons where each individual nerve cell can make connections with thousands of others. AMPA receptors are a set of membrane proteins that mediate fast signal transmission across these connection points called synapses, with certain receptor complexes predominating in different parts of the brain. Ingo Greger’s group, in the LMB’s Neurobiology Division, has visualized an AMPA receptor with two different auxiliary subunits, a specific combination that is enriched in the hippocampus and involved in learning and memory.

AMPA receptors are found on the post-synaptic membrane of excitatory synapses, where the signal is received and must be propagated. In particular, AMPA receptors are responsible for most of the fast excitatory synaptic transmission in the brain. A key feature of AMPA receptors is that they are complexes that can be assembled from a number of combinations of different subunits and can be modulated by different auxiliary subunits, allowing differential regulation across cell-types and regions of the brain. How different auxiliary subunits co-operate to increase ion flux through the receptor channel has so far been elusive.

What happens at excitatory synapses?

At excitatory synapses, the arrival of electrical signals at the pre-synaptic membrane increases the probability of a chemical signal being sent down a post-synaptic nerve cell. This process involves release of neurotransmitters from the first cell that are bound by receptors on the second. The primary neurotransmitter at excitatory synapses in the brain is the amino acid glutamate. Glutamate can be bound by AMPA, NMDA, and kainate receptors that all act as ion channels, with the flow of cations into the post-synaptic nerve cell driving the continuing signal in response to detection of glutamate.

Danyang Zhang, a postdoctoral researcher in Ingo’s group, determined these structures using cryo-EM. By comparing the open and closed states, the team then produced a model to explain how these auxiliary subunits promote the open-channel state to increase ion flux. The structures also provide unprecedented insight into how the receptor transitions between open and closed states.