The NHS has finally struck a deal for a life-extending drug given to children battling a cruel disease that slowly robs them of their ability to walk, talk and breathe.

Health watchdogs earlier this year rejected cerliponase alfa – the only available medication to treat one type of Batten disease, saying it was too expensive.

But officials have now agreed a ‘fair price’ for the drug, marketed as Brineura, with its manufacturer following almost two years of fierce negotiations and just weeks before affected families were to appeal the decision in court.

It is estimated the drug costs around £500,000 per patient per year but the discounted price offered to the NHS has not been revealed following the U-turn. 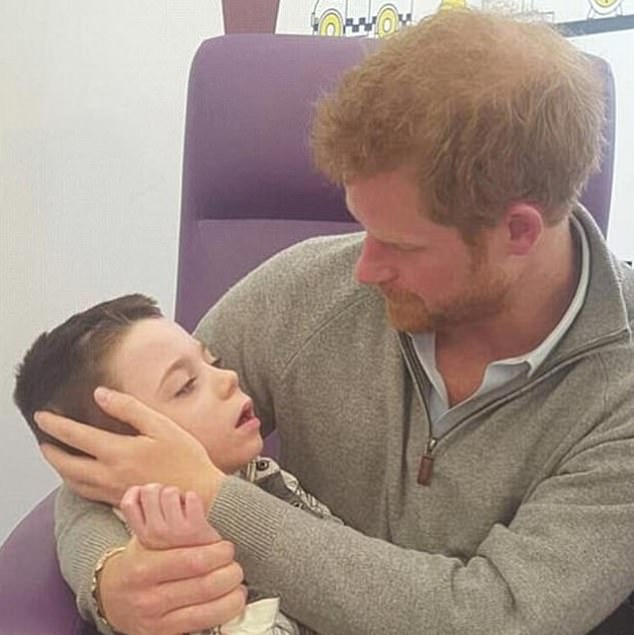 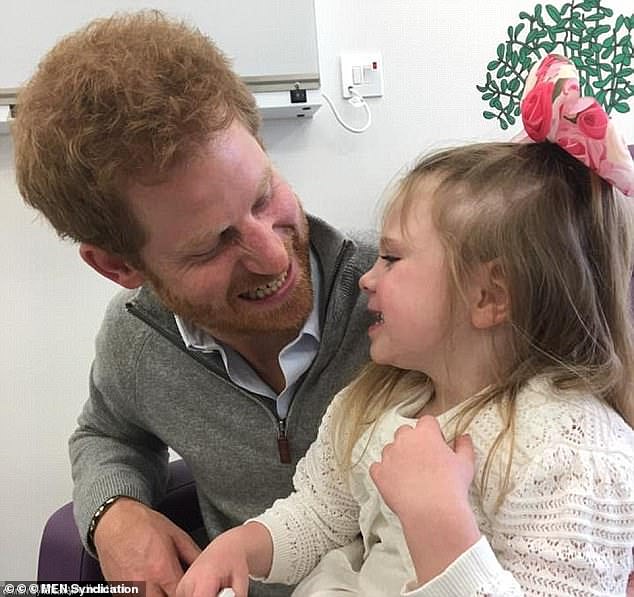 Amelia Carroll, Oliver’s brother, who started the treatment before she developed any symptoms of Batten disease, is a happy, healthy little girl, pictured with Prince Harry in 2016

He said: ‘This is another concrete step towards ensuring NHS patients with rare conditions get access to important new treatments.

‘Coming after extended negotiation, the new deal reached today is a reminder that in order to succeed, companies must be flexible and realistic.’

Brineura is being offered as part of a managed access agreement (MAA) over the next four-and-a-half years. Evidence about its effectiveness will be collected in the meantime.

Outraged families – including the parents of a boy once cradled by Prince Harry in hospital – launched legal action in the wake of the initial decision by NICE.

The High Court last month announced it would hold a judicial review into legality of the decision. Lawyers fighting to overturn the decision claimed it was unlawful.

A full hearing in the High Court was scheduled to be held on 16 and 17 October. It is, however, currently unclear whether or not this will still go ahead.

Samantha Barber, chief executive of the Batten Disease Family Association, said the charity was ‘absolutely delighted’ with the decision to approve Brineura.

She said: ‘Today’s announcement will be a huge relief to all those families affected who have fought night and day for this outcome. 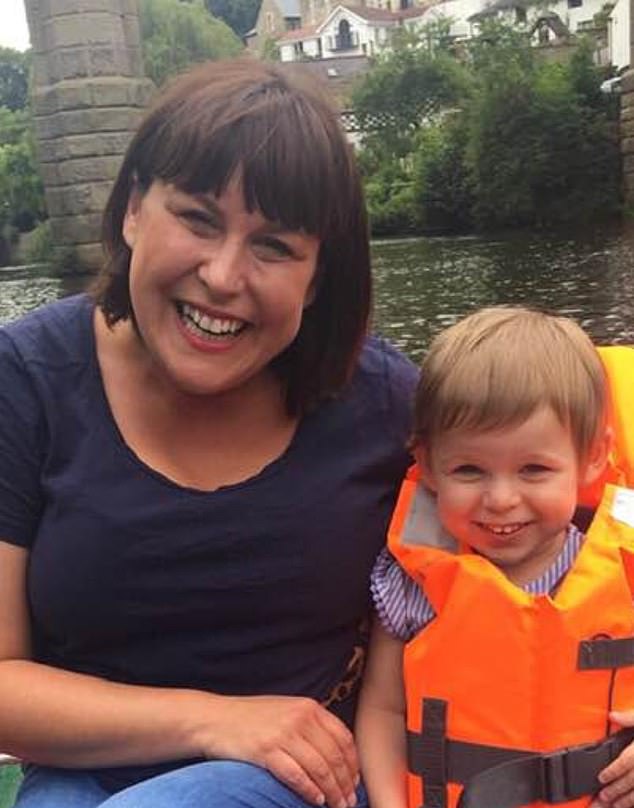 Caroline Day (left), mother of a three-year-old Connie who is struck down with Batten disease (right) told MailOnline how she fears a meeting tomorrow between officials and the drug manufacturer is just going to be a ‘tick box exercise’

WHAT IS BATTEN DISEASE?

Batten disease is a rare genetically-inherited disease, caused by waste build-up in the cells which creates neurodegnerative effects including:

Because it is a rare disease, it is often difficult to diagnosed and untested at birth.

There are 14,000 children worldwide that are diagnosed with the disorder.

The Batten Disease Family Association estimate that around up to 17 people are diagnosed with a form of the disease each year.

There are between 100 – 150 affected individuals currently living with Batten disease in the UK.

There is currently no known cure or treatment available for Batten disease.

‘Brineura offers real hope for these children and the priority now must be to ensure all those who need it get access as soon as possible.

‘While we recognise the efforts made on both sides to reach this agreement, the reality is that it has taken nearly two years to get to this point.

‘This human cost of this delay and the anguish caused cannot be underestimated and we hope that efforts will be made to help others avoid this heartache in the future.’

Professor Stephen Powis, NHS national medical director, said: ‘This is important news for children and their families suffering from this devastating disease.’

Children battling the condition will get access to Brineura on the NHS by Christmas at the latest. It is administered directly into the brain through a surgical implant.

The drug – a form of enzyme therapy – is already available in 20 other countries, including Wales, where health care is devolved, and the Netherlands.

There is currently no cure for the CLN2 form of the condition, estimated to strike only 30 to 50 children in the UK – around a fifth of all Batten disease patients.

Brineura gives neuronal ceroid lipofuscinosis type II patients a synthetic version of a crucial enzyme they are missing that is required for healthy brain function.

Without treatment, life expectancy ranges from between six and 13. It slowly robs children of their ability to walk, talk, see and breathe.

Studies have shown Brineura can slow down the progression of the disease, often labelled by affected families as being a form of childhood dementia.

NICE’s initial draft decision in February ruled Brineura – owned by pharmaceutical firm BioMarin – could ‘not be recommended as a cost-effective use of NHS resources’.

It prompted the heartbroken parents of two children – Oliver and Amelia Carroll – with Batten disease to launch legal action through the firm Irwin Mitchell.

Lawyers concluded the process the body used to reach its decision, which was open for consultation for stakeholders, ‘may have been flawed’.

In a statement issued on its website, the legal firm said its solicitors ‘believe the decision is unlawful on several grounds and is also a breach of human rights legislation’.

Oliver, eight, and six-year-old Amelia currently receive access to Brineura as part of a trial at Great Ormond Street Hospital funded by BioMarin – the manufacturer.

Before being given the drug, Oliver had been robbed of his ability to walk and talk – but his family, of Poynton in Cheshire, say his health is now stable.

Amelia started the treatment before any of the crippling symptoms emerged. She attends a mainstream school and loves to dance, gymnastics and swimming.

Gail and Matthew Rich, a couple from a village near Newcastle who also have two daughters with CLN2, launched legal action through the same firm shortly after.

Nicole, seven, and her three-year-old sister Jessica both use Brineura, one through a drug trial and the other through a scheme paid for by BioMarin.

Since taking the drug, Nicole’s seizures and speech problems have been kept at bay. Jessica has yet to develop any signs of the condition. She starts nursey this September. 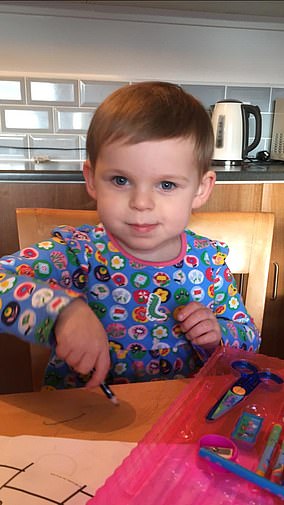 A mother-of-two claims not giving Brineura to her Batten disease-suffering daughter will be like handing her a ‘death sentence’.

Caroline Day, from Leeds, said her three-year-old Connie may not even reach her sixth birthday without the life-extending drug.

Connie, whose full name is Constance-Annakin, was diagnosed with the CLN2 form of Batten disease in June, after two months of tests.

Ms Day, 41, told MailOnline: ‘If Connie got this drug it would give us our normality back that I feel we’ve had taken away from us.’

Without Brineura, she will go blind, be bed-ridden, have ‘seizure after seizure’, lose her ability to walk, talk and eat, Ms Day added.

‘I just want her to live a normal, happy life and not have a life cut short. She might not even make it to six without treatment.’

She has been on sick leave since April, when her daughter was first struck down with seizures – a symptom of the crippling condition.

Ms Day, who gives 24-hour care to Connie, told MailOnline: ‘Realistically, I’m not going to be able to go back. That might be different if she gets treatment.’

Donate to their fundraising efforts here