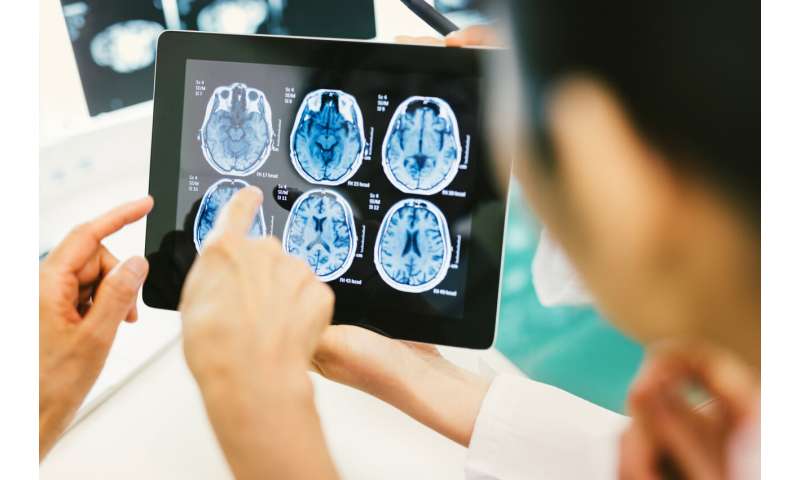 Being traumatized can cause what are known as dissociative symptoms—such as experiencing amnesia, an out-of-body experience, feeling emotionally numb—which may help people cope. Experiencing these symptoms intensely or for a long time, however, can negatively impact an individual’s ability to function.

A team led by investigators at McLean Hospital has now found that brain imaging analyses can uncover changes in functional connections between brain regions linked to a specific individual’s dissociative symptoms following trauma. The findings, which have been published in The American Journal of Psychiatry, may be useful for tailoring treatments for affected patients.

For the study, the researchers applied a novel machine-learning (artificial intelligence) technique to functional magnetic resonance imaging tests of 65 women with histories of childhood abuse and current post-traumatic stress disorder (PTSD). The technique, developed by one of the lead authors, Meiling Li, Ph.D., from Athinoula A. Martinos Center for Biomedical Imaging, showed that measurements related to connections between different regions of the brain correlated with dissociative symptoms in the women.

“This moves us one step closer to identifying a ‘fingerprint’ of dissociation in the brain that could be used as an objective diagnostic tool,” said one of the lead authors, Lauren A.M.Lebois, Ph.D., director of neuroimaging in the Dissociative Disorders and Trauma Research Program at McLean Hospital. “In the future, once brain-based measures reach high levels of sensitivity and specificity, we could use these assessments in individuals who are unable to effectively talk about their symptoms—for example, those who might intentionally or unintentionally minimize or exaggerate their symptoms—or in situations like court proceedings where objective corroborating evidence is requested.”

Lebois noted that the existence of dissociative symptoms and dissociative disorders is often doubted, and people are rarely asked about them. “This doubt in the lay and medical communities fuels a vicious cycle: New generations of clinicians aren’t educated about these experiences; these symptoms are misunderstood, stigmatized, and underdiagnosed; and funding isn’t prioritized in this area of research.” Consequently, people who suffer from these symptoms and disorders caused by childhood trauma don’t have access to existing mental health interventions. “It’s a global ethical issue—children are abused or neglected, and then on top of that injustice, they can’t receive treatments that would help them as adults,” said Lebois.

The study may help to address this issue by showing that dissociative symptoms in the brain can be objectively measured, making some of the invisible wounds of childhood trauma visible. “We hope that this biological evidence will be particularly compelling regarding the legitimacy of these psychiatric symptoms,” said Lebois.

Increased awareness and acceptance surrounding dissociative symptoms may motivate patients to seek help, medical practitioners to provide adequate care, and insurance providers to cover treatment. A better understanding of the biology behind dissociative symptoms and disorders may also point to new therapeutic strategies.

“The important findings from this study have steered us toward the next step in our research quest,” said one of the senior authors on the study, Milissa Kaufman, MD, Ph.D., director of the Dissociative Disorders and Trauma Research Program at McLean Hospital.