Women with spondyloarthritis (SpA) who are desiring pregnancy may want to consider decreasing use or discontinuing use (with supervision) of nonsteroidal anti-inflammatory drugs (NSAIDs) before conception, new data suggest. 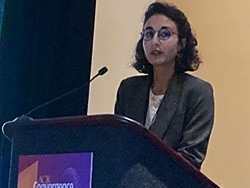 Researchers have found a connection between NSAID use and age and a significantly longer time to conception among women with spondyloarthritis. Sabrina Hamroun, MMed, with the Rheumatology Department at the University Hospital Cochin in Paris, France, presented the findings during a press conference at the American College of Rheumatology (ACR) 2022 Annual Meeting.

SpA commonly affects women of childbearing age, but data are sparse regarding the effects of disease on fertility.

Patients in the study were taken from the French multicenter cohort GR2 from 2015 to June 2021.

Among the 207 patients with SpA in the cohort, 88 were selected for analysis of time to conception. Of these, 56 patients (63.6%) had a clinical pregnancy during follow-up.

Subfertility Group Took an Average of 16 Months to Get Pregnant

The average preconception Bath Ankylosing Spondylitis Disease Activity Index score was 2.9 (+/- 2.1), the authors noted. The average age of the participants was 32 years.

Twenty-three patients were treated with NSAIDs, eight with corticosteroids, 12 with conventional synthetic disease-modifying antirheumatic drugs, and 61 with biologics.

Researchers adjusted for factors including age, body mass index, disease duration and severity, smoking, form of SpA (axial, peripheral, or both), and medication in the preconception period.

Hamroun acknowledged that no data were available on the frequency of sexual intercourse or quality of life, factors that could affect time to conception. Women were asked when they discontinued contraceptive use and actively began trying to become pregnant.

She told Medscape Medical News that information on the dose of NSAIDs used by the patients was incomplete, noting, “We were therefore unable to adjust the results of our statistical analyses on the dose used by patients.”

Additionally, because the study participants were patients at tertiary centers in France and had more severe disease, the results may not be generalizable to all women of childbearing age. Patients with less severe SpA are often managed in outpatient settings in France, she said.

When asked about alternatives to NSAIDs, Hamroun said that anti–tumor necrosis factor agents with low placental passage may be a good alternative, “if a woman with long-standing difficulties to conceive needs a regular use of NSAIDs to control disease activity, in the absence of any other cause of subfertility.”

The patient’s age must also be considered, she noted.

“A therapeutic switch may be favored in a woman over 35 years of age, for example, whose fertility is already impaired by age,” Hamroun said.

She pointed out that her results are in line with the ACR’s recommendation to discontinue NSAID use during the preconception period in women with SpA who are having difficulty conceiving.

Control Before Conception Is Important

Sinead Maguire, MD, a clinical and research fellow in the Spondylitis Program at Toronto Western Hospital in Toronto, Ontario, Canada, who was not part of the study, said the study highlights the importance of optimizing disease control before conception.

“There are a number of things rheumatologists can do to support our SpA patients when they are trying to conceive,” she told Medscape Medical News. “One of the most important issues to address is ensuring their SpA is in remission and continues to remain so. For that reason, if a woman is requiring regular NSAIDs for symptom control, the results of this study might encourage me to consider a biologic agent sooner to ensure remission.”

She urged women who want to become pregnant to discuss medications with their rheumatologist before trying to conceive.

“It is very exciting to see studies such as this so that rheumatologists can provide answers to our patients’ questions with evidence-based advice,” she said.

Marcia Frellick is a freelance journalist based in Chicago. She has previously written for the Chicago Tribune, Science News, and Nurse.com, and was an editor at the Chicago Sun-Times, the Cincinnati Enquirer, and the St. Cloud (Minnesota) Times. Follow her on Twitter at @mfrellick