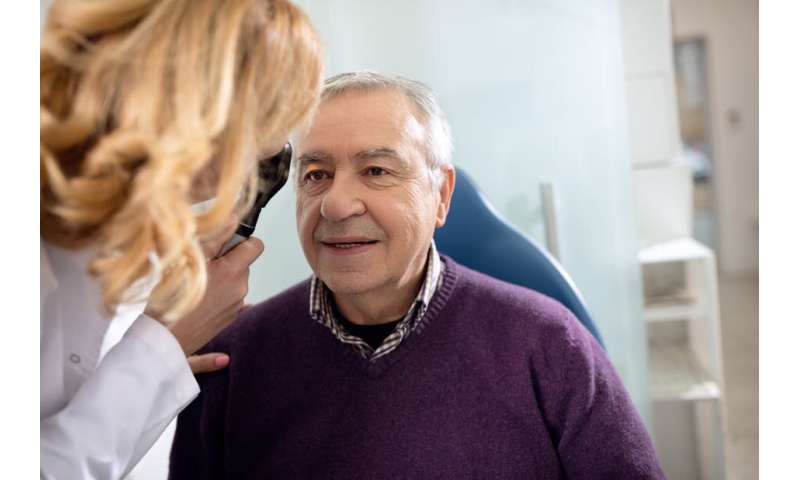 Parkinson’s disease is the second most common neurodegenerative disease, affecting over 10 million people worldwide. It’s characterized by changes in movement, including tremors, and slower and more rigid movements. But researchers are also beginning to investigate other symptoms of Parkinson’s disease—including those involving the eye.

Parkinson’s results from the degeneration of dopamine neurons in the brain’s basal ganglia—an area involved in voluntary movement. Though no cure exists for Parkinson’s, symptoms can be managed with drugs that replace dopamine.

No single diagnostic test exists for Parkinson’s as the blood-brain barrier (which protects the brain from pathogens roaming the bloodstream) and skull make it hard to assess the brain. As a result subjective assessments of symptoms are used to diagnose patients.

Given Parkinson’s is known to affect the body’s motor system, it’s perhaps not surprising it has been shown to disrupt eye movements. Promisingly, Parkinson’s may be diagnosed using technologies that already exist by showing subtle changes in eye movements and the thinning of specific layers in the retina. This may help measure the effectiveness of treatments and determine the progression of the disease.

Another study, which used deep brain stimulation, found targeting the globus pallidus interna—the brain area partially responsible for conscious movement—reduced the number of antisaccade errors. Deep brain stimulation is the only surgical treatment for Parkinson’s disease. It works by directing electricity to precise regions of the brain. Stimulation targeting the subthalamic nucleus, an adjacent region, had no effect. Recently, researchers found stimulating the subthalamic nucleus increased antisaccade errors and delay both away from and towards a stimulus.

Though evidence from the small number of stimulation studies conflict, they highlight how Parkinson’s disease could influence eyes movements.

A study from earlier this year describes 85% of recently diagnosed Parkinson’s patients displaying rhythmic eyelid fluttering upon closing their eyes. These small changes in movement can be measured using webcams, virtually. However, larger studies are needed to investigate the potential of eyelid fluttering as a diagnostic tool.

Researchers have identified the abnormal accumulation of the protein alpha-synuclein in areas of the brain involved with voluntary movement in patients with Parkinson’s disease. Alpha-synuclein is found throughout the brain, although its function is not yet well defined. It is thought to regulate the synthesis of dopamine, which in turn helps regulate movement.

Interestingly, a handful of recent studies have found an accumulation of alpha-synuclein in the retinal tissue of Parkinson’s patients compared to healthy samples. The amount of alpha-synuclein found may even correlate with the severity of disease—though this potential disease indicator can only be detected using post-mortem tissue samples.

Optical coherence tomography (OCT) scans, which take cross-sectional images of the retina’s ten distinct layers, may allow researchers to detect retinal changes in living patients. These scans are fast, non-invasive, relatively cheap and easy to use.

Alongside diagnosing Parkinson’s, eye tests could also help track disease progression. A study involving 126 participants looked to see if OCT scans and simple visual chart tests in patients with Parkinson’s disease correlated with the risk of dementia (an algorithm was used to calculate risk).

Those with Parkinson’s disease who were calculated to have the highest risk of dementia fared worse on the sight tests. These patients also were found to have greater retinal thinning. These findings were not replicated in participants who had a similarly high dementia risk, but no Parkinson’s diagnosis.

However, this type of study has limitations. The number of patients involved and other factors—such as the medication they take—can affect the findings. Eye tests are also harder to perform on patients with the most severe symptoms.

As more patients are studied, more can be learned about Parkinson’s disease. Big data studies can be advantageous because Parkinson’s disease is relatively common and eye scans are becoming increasingly routine. This allows researchers to analyze large numbers of OCT scans and retinal images already captured on patients with, and without, Parkinson’s.

Databases such as this exist, the largest being the INSIGHT Data Hub for Eye Health, which consist of millions of eye scans alongside anonymised medical histories from over 250,000 patients. Population-based approaches, coupled with the use of machine learning (a type of artificial intelligence) and deep learning (a subset of machine learning), can sift through large databases, uncovering patterns. Researchers can use several eye scans from the same patient to help investigate disease progression.