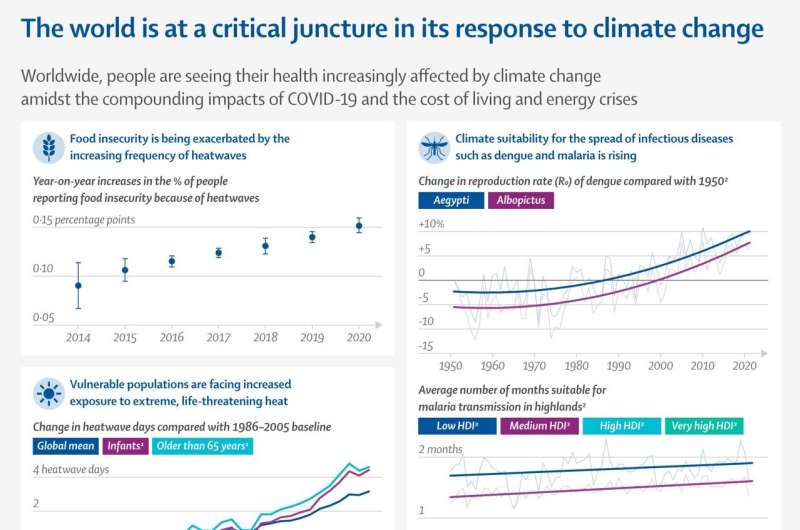 As countries and health systems continue to grapple with the health, social and economic implications of the COVID-19 pandemic, conflict in Ukraine, and a global energy and cost of living crisis, climate change continues to rise unabated. The dependence on fossil fuels is compounding the health impacts of these crises, according to the 2022 Report of The Lancet Countdown on Health and Climate Change: health at the mercy of fossil fuels.

“Our report this year reveals we are at a critical juncture. We see how climate change is driving severe health impacts all around the world, while the persistent global fossil fuel dependence compounds these health harms amidst multiple global crises, keeping households vulnerable to volatile fossil fuel markets, exposed to energy poverty, and dangerous levels of air pollution,” says Dr. Marina Romanello, Executive Director of The Lancet Countdown at the University College London.

The seventh Lancet Countdown report represents the work of 99 experts from 51 institutions, including the World Health Organization (WHO) and the World Meteorological Organization (WMO), and is led by University College London. It publishes ahead of the 27th UN Conference of the Parties (COP27), presenting 43 indicators that include new and improved metrics that monitor the impact of extreme temperature on food insecurity, household air pollution, and the alignment of fossil fuel industry with a healthy future. The new report publishes at the same time as The Lancet Public Health journal publishes a Europe regional report from the Lancet Countdown. A report from China will also publish on Saturday, October 29, 2022.

“Despite the challenges, there is clear evidence that immediate action could still save the lives of millions, with a rapid shift to clean energy and energy efficiency. Accelerated climate action would deliver cascading benefits, with more resilient health, food, and energy systems. With the world in turmoil, governments and companies have the opportunity to put health at the center of an aligned response to these concurrent crises, and deliver healthy, safe future for all,” adds Dr. Romanello.

Climate change is amplifying the health impacts of multiple crises

Persistent fossil fuel over-dependence is rapidly worsening climate change, leading to dangerous health impacts being felt by people around the world. The data shows that no country is safe. Climate change increases the likelihood and severity of extreme weather events such as heat waves, heavy precipitation, wildfires, storms, and droughts, costing hundreds of thousands of lives each year worldwide.

“Health care systems are the first line of defense for treating the physical and mental health impacts of extreme weather events and the other impacts of a changing climate. But health systems are struggling to cope with the burden of the COVID-19 pandemic, supply chain disruptions, and other challenges, putting lives in jeopardy, today and in the future,” says Professor Kristie Ebi, Lancet Countdown Working Group Lead on Adaptation, Planning, and Resilience for Health and Professor in the Center for Health and the Global Environment, University of Washington.

Data in this year’s report suggests that in the immediate term, climate change is affecting every pillar of food security. Rising temperatures and extreme weather events threaten crop yields directly shortening the growth season of crops by 9.3 days for maize, 1.7 days for rice and 6 days for winter and spring wheat. Extreme heat was associated with 98 million more people reporting moderate to severe food insecurity in 103 countries in 2020 than annually between 1981 and 2010. On average, 29% more of the global land area was affected by extreme drought annually between 2012 and 2021 than between 1951 and 1960, putting people at risk of water and food insecurity.

“Climate change is already having a negative impact on food security, with worrying implications for malnutrition and under-nourishment. Further increases in temperature, frequency and intensity of extreme weather events, and carbon dioxide concentrations will put yet more pressure on availability of and access to nutritious food, especially for the most vulnerable. This is particularly concerning given that global food supply chains have this year once again been revealed to be highly vulnerable to shocks, manifesting in rapidly increasing food prices and commensurate increases in food insecurity,” says Professor Elizabeth Robinson, Lancet Countdown Working Group Lead on Climate Change Impacts, Exposures, and Vulnerability and Director of the Grantham Research Institute at the London School of Economics.

The changing climate is also affecting the spread of infectious diseases. The length of time suitable for malaria transmission rose by 32.1% in highland areas of the Americas, and 14.9% in Africa from 2012-2021, compared to 1951-1960. The influence of the climate on the risk of dengue transmission rose by 12% globally in the same period. Combined with the COVID-19 pandemic, the rise of infectious disease due to climate change has led to misdiagnosis, pressure on health systems, and difficulties in managing simultaneous disease outbreaks.

New and updated indicators revealed that governments and companies continue to prioritize fossil fuel extraction and burning, despite the severe and compounding health harms of climate change.

The carbon intensity of the global energy system (the biggest single contributing sector to global greenhouse gas emissions) has reduced by less than 1% from 1992 levels when the UNFCCC was adopted, in which countries agreed to prevent dangerous human-caused climate change, and its negative effects on human health. At the current pace of change, fully decarbonizing the energy system would take 150 years, far from the requirements of keeping global warming at 1.5°C as outlined in the Paris Agreement.

Governments continue to encourage fossil fuel production and consumption, with 69 out of the 86 governments analyzed in this report effectively subsidizing fossil fuels, for a net total of $400 billion in 2019 (taking into account the contribution of both carbon pricing instruments and fossil fuel subsidies). These subsidies exceeded 10% of national health spending in 31 of the countries and exceeded 100% in five countries. At the same time, governments have so far failed to provide the smaller sum of $100 billion per year to help support climate action in lower income countries—which was committed to be reached by 2020 in the Copenhagen Agreement—jeopardizing a just transition to a healthy future.

Regardless of their climate claims and commitments, the current strategies of 15 of the largest oil and gas companies would lead to their greenhouse gas production exceeding their share of emissions compatible with 1.5°C of warming by 37% in 2030, and 103% in 2040. As many file record profits this year, further delaying their investments for a zero-carbon energy transition threatens to permanently push the world off-track from meeting the commitments set in the Paris Agreement.

Meanwhile, delays in uptake and inequitable access to clean energies has left households dependent on the use of dirty fuels, exposed to energy poverty and dangerous levels of indoor air pollution. Biomass (such as wood or dung) contributed to as much as 31% of energy consumed in the domestic sector globally in 2020, rising to 96% in low- to middle-income countries. Household concentrations of dangerous particulate matter air pollution (PM2.5) exceeded the WHO recommendation by 30-fold in 2020 in the 62 countries assessed, exposing families to dangerous levels of air pollution.

Global crises cannot be addressed in isolation, but rather need a unified cohesive approach in order create equitable solutions for all. Not doing so would worsen overall health outcomes. Less than a third of the $3.1 trillion spent on the COVID-19 pandemic response will reduce greenhouse gas emissions or air pollution. Now, short-sighted responses to the energy crisis and cost-of-living crisis threaten to worsen climate change, with many governments and companies are backsliding to coal, further threatening people’s health and survival.

“Current strategies from many governments and companies will lock the world into a fatally warmer future, tying us to the use of fossil fuels, that are rapidly closing off prospects for a liveable world. This is a result of a deep failure to recognize the need for an urgent reprioritization of funding to secure a zero-carbon, affordable and healthy future,” says Professor Paul Ekins, Lancet Countdown Working Group Lead on Economics and Finance and Professor of Resources and Environment Policy at the Bartlett School, University College London.

A health-centered response could still deliver a thriving future

Despite the worrying indications laid out in this report, there are still glimmers of hope.

Improvements in air quality would help to prevent deaths resulting from exposure to fossil fuel-derived particulate matter air pollution, of which there were 1.3 million in 2020 alone. Accelerating a transition to more balanced and plant-based diets would not only reduce 55% of agricultural sector emissions from red meat and milk production, but also prevent up to 11.5 million diet-related deaths annually and reduce the risk of zoonotic diseases.

Today, only 27% of urban centers are classified as moderately green or above, and people still rely on air conditioning for cooling, which in 2020 was responsible for 900 billion tons of carbon dioxide emissions, and for 24,000 deaths from PM2.5 exposure. Urban redesign that puts health first can provide increased greenspace that reduces urban heat, improve air quality, and benefit physical and mental health.

Some signs of hope and movement towards action are apparent from the data in this year’s report. Although total clean energy generation remains insufficient, it reached record high levels in 2020, and zero-carbon sources accounted for 80% of investment in electricity generation methods in 2021. For the first time, direct and indirect employment in renewables exceeded direct employment in fossil fuel extraction industry, which recorded 10.5 million employees (down by 10% from 2019), reaffirming that renewable energy could support job security, now and in the future.

The health sector itself, while still responsible for 5.2% of all global emissions, has shown impressive climate leadership, and 60 countries have committed to transitioning to climate-resilient and/or low- or net zero-carbon health systems as part of the COP26 Health Program.

Simultaneously, public engagement with health aspects of climate change is at an all-time high. Coverage of health and climate change in the media increased by 27% in 2021 from 2020 and there has been increased engagement from world leaders, with 60% of countries drawing attention to climate change and health in the 2021 UN General Debate, likely due to heightened awareness off the back of the COVID-19 pandemic.

“The world is at a critical juncture. Our global commitment to cut fossil fuels is way off-track, and now fossil fuel-focused responses to the energy crises we face could reverse the progress made so far. We must change, otherwise our children face a future of accelerated climate change, threatening their very survival,” says Professor Anthony Costello, Co-Chair of the Lancet Countdown.

“A health-centered response to the current crises would still provide the opportunity to deliver a low-carbon, resilient, healthy future, where people all over the world can not only survive but thrive. There is still time to realize this future if we act now.”

Responding to the report publication, UN Secretary-General, António Guterres (who was not involved in writing the report) says, “The climate crisis is killing us. It is undermining not just the health of our planet, but the health of people everywhere—through toxic air pollution, diminishing food security, higher risks of infectious disease outbreaks, record extreme heat, drought, floods and more.

“Human health, livelihoods, household budgets and national economies are being pummeled, as the fossil fuel addiction spirals out of control. The science is clear: Massive, common-sense investments in renewable energy and climate resilience will secure a healthier, safer life for people in every country.”