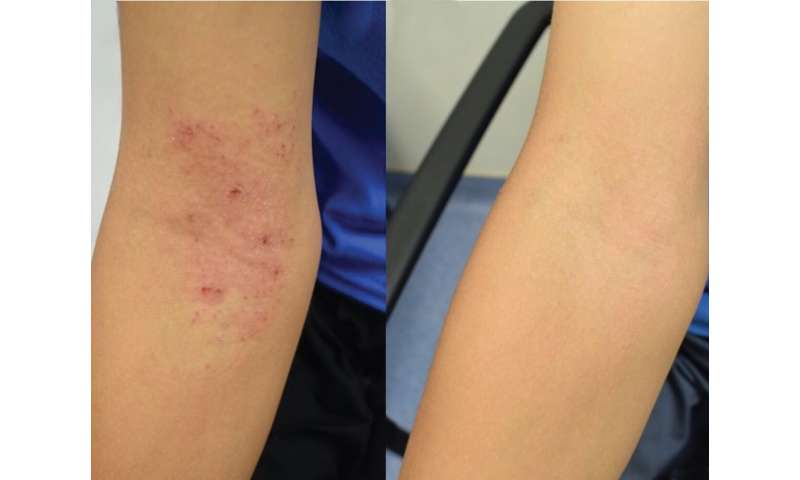 An experimental treatment for eczema that aims to modify the skin microbiome safely reduced disease severity and increased quality of life for children as young as 3 years of age, a National Institutes of Health study has found. These improvements persisted for up to eight months after treatment stopped, researchers report Sept. 9 in Science Translational Medicine.

Atopic dermatitis, commonly called eczema, is a chronic inflammatory skin disease characterized by dry, itchy skin and rashes. The disease is most common in children and is linked to an increased risk of developing asthma, hay fever and food allergy. While available treatments can help manage eczema symptoms, current options can be costly, and many require multiple daily applications.

“A child suffering from eczema, which can be itchy, painful and distracting for the child, also is very difficult for the entire family,” said Anthony S. Fauci, M.D., director of NIH’s National Institute of Allergy and Infectious Diseases (NIAID), which led the study. “These early-stage findings suggest that R. mucosa therapy may help relieve some children of both the burden of eczema symptoms and the need for daily treatment.”

Numerous genetic and environmental factors contribute to eczema, and scientists are learning more about the role that the skin’s microbiome plays in this condition. In 2016, NIAID researchers reported that R. mucosa strains isolated from healthy human skin improved outcomes in cell culture and mouse models of eczema.

To build on these preclinical findings, NIAID launched a Phase 1/2 clinical trial at the NIH Clinical Center in Bethesda, Maryland, to assess the safety and potential benefit of R. mucosa therapy in people with eczema. Interim results reported in 2018 for 10 adults and five children aged 9 to 14 years indicated that the treatment was safe and associated with reduced eczema severity. Since then, the trial has enrolled an additional 15 children, for a total of 20 children with mild to severe eczema ranging in age from 3 to 16 years. 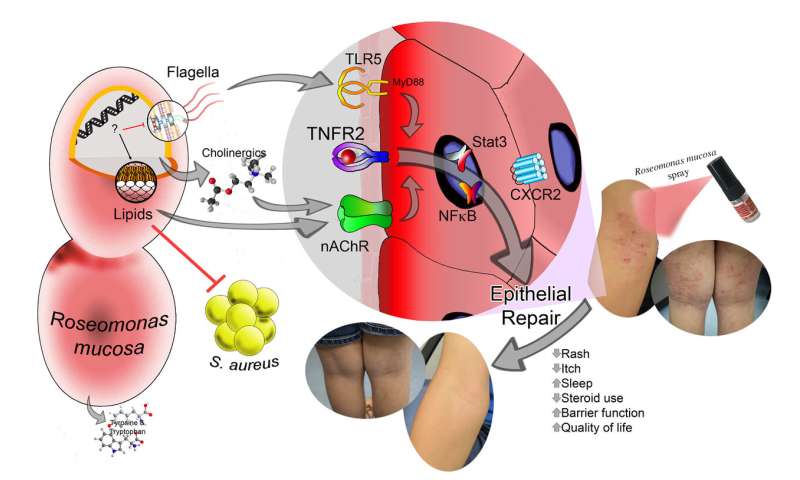 Twice weekly for three months and every other day for an additional month, children or their caregivers sprayed a solution of sugar water containing live R. mucosa onto areas of skin with eczema. For the first 15 children enrolled in the study, the dose of live R. mucosa was gradually increased each month. The last five children to enroll received the same dose throughout the four-month treatment period. Regardless of dosing strategy, no serious adverse events were attributed to the therapy.

“Most children in the study experienced substantial improvements in their skin and overall wellbeing following R. mucosa therapy. Encouragingly, the therapeutic bacteria stayed on the skin and continued to provide benefit after therapy stopped,” said NIAID’s Ian Myles, M.D., principal investigator of the trial. “These results support a larger study to further assess the safety and effectiveness of this experimental treatment by comparing it with a placebo.”

Seventeen of the 20 children experienced a greater than 50% improvement in eczema severity following treatment. Improvement occurred on all treated skin sites, including the inner elbows, inner knees, hands, trunk and neck. The scientists also observed increases in the skin’s barrier function—its ability to seal in moisture and keep out allergens. Additionally, most children needed fewer corticosteroids to manage their eczema, experienced less itching, and reported a better quality of life following the therapy. These benefits persisted after treatment ended, and the therapeutic R. mucosa strains remained on the skin for up to eight months.

The NIAID researchers next set out to better understand how R. mucosa therapy improves eczema symptoms. They found that treated skin had increased microbial diversity and reduced levels of Staphylococcus aureus—a bacterium known to exacerbate eczema.

In addition to imbalances in the microbiome, the skin of people with eczema is deficient in certain lipids, or oils. By conducting experiments in cell and animal models of eczema, the NIAID scientists found that a specific set of lipids produced by R. mucosa strains isolated from healthy skin can induce skin repair processes and promote turnover of skin tissue. Study participants had increased levels of these lipids on their skin after treatment with R. mucosa.