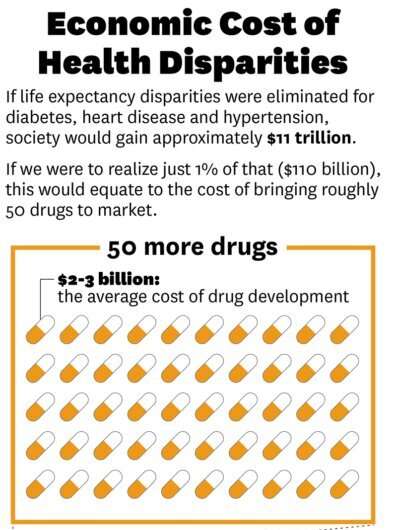 Populations underrepresented in clinical trials face worse health outcomes that will cost the U.S. trillions of dollars over the next three decades, according to a new report from the National Academies of Science, Engineering and Medicine.

The committee relied on economic projections developed using the Schaeffer Center’s Future Elderly Model (FEM), an economic microsimulation model that was used to calculate the burden from lost life, increased disability and lost productivity arising from disparities in diabetes, heart disease and hypertension.

“We rely on clinical trials to give us accurate, evidence-based approaches, and this isn’t happening,” said Schaeffer Center co-director Dana Goldman, who sat on the committee that commissioned the report. “If we achieve trials that are more representative, we have the potential to save billions and improve the quality of life for millions of Americans.”

Modeling the cost of chronic disease

Lack of representation in clinical trials may directly impact health outcomes, leading to health disparities in the U.S. The committee leveraged the FEM to model the impact of chronic diseases among a representative cohort of Americans who will be 50 or older between 2020 and 2050. They then analyzed the difference in outcomes among Hispanic men and women, Black men and women and non-Hispanic white women compared to non-Hispanic white men.

Housed at the Schaeffer Center, the FEM has been used to explore a variety of policy questions, ranging from the fiscal future of the U.S. to the role biomedical innovation can play in future health outcomes.

Bryan Tysinger, director of health policy simulation at the Schaeffer Center and assistant professor at the Price School of Public Policy, led this analysis.

Tysinger and his colleagues found eliminating disparities among individuals with diabetes would increase life expectancy by nearly one year for underrepresented groups. These individuals would also experience an increase of about a year in disability-free life and would remain in the workforce for about half a year longer. 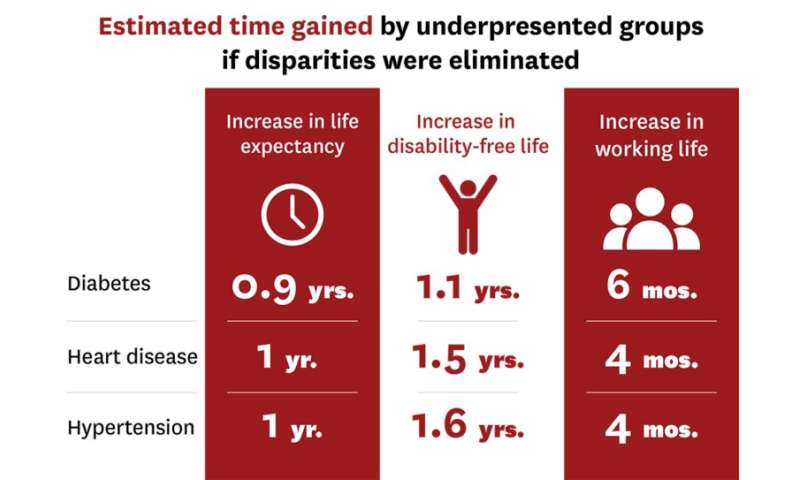 “We know that having diabetes negatively impacts everyone’s health outcomes. What we found is that diabetes reduces the quality and quantity of life of Black and Hispanic individuals even more than that of white men,” explained Tysinger. “If clinical trials were more representative, barriers to medicines and devices that lead to these disparities may be reduced.”

Similar trends were found in heart disease and hypertension.

Using these findings, they estimate the value that would be accrued if all life expectancy disparities were eliminated for diabetes, heart disease and hypertension would be approximately $11 trillion over the next three decades.

These disparities are caused by several complicated factors. But if we were able to realize just 1% of that value through initiatives that resulted in better representation in clinical trials, it would result in $110 billion in gains alone by 2050. To put that in perspective, that is the equivalent of the cost of bringing about 50 new drugs to market.

A lack of diversity limits innovation

Lack of representation in clinical trials has been a policy priority for federal agencies dating back to the early 1990s and advanced by federal agencies including the Food and Drug Administration (FDA) and National Institutes of Health (NIH).

Recent evidence suggests there has been some progress, especially in recruiting women and older adults. But more can be done—including better data reporting requirements.

“Despite new regulatory requirements, data on racial and ethnic diversity in clinical trials has not been reliably reported and when they are reported, it is not always done consistently,” said Jakub Hlávka who contributed analysis on demographic trends in clinical trial data to the committee. “Much of the data we used had to be manually entered and coded. This makes ongoing analysis challenging and prone to errors.” Hlávka is executive director of the Healthcare Markets Initiative at Schaeffer Center and an assistant professor at the Price School.

He found that the representativeness of volunteers in trials that resulted in FDA approval has gradually improved since 2014. But, in some cases more than 20% of participants had unknown ethnicity. The analysis of all trials, even those that do not result in an FDA approval, is even more complicated.

“There are reporting gaps which clouds transparency,” Hlávka said. “A clearer picture of trial enrollment benefits scientific progress and will lead to better treatment options for all patients, including by identifying therapies that may have missed their primary endpoints due to enrollment challenges.”