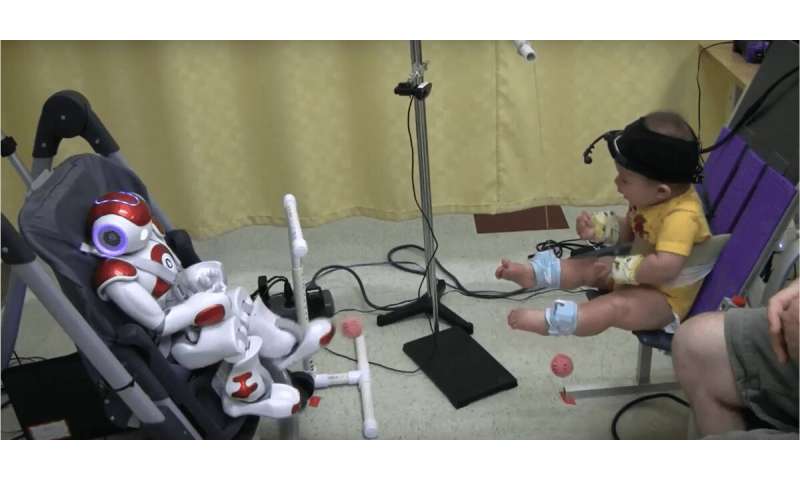 “I strongly believe that human-robot interaction is a research topic that is promising for the future of healthcare,” said Klein, a member of the USC Interaction Lab.

Last fall, Klein’s research team won an award in the “CS for Social Good” white paper competition sponsored by the Computing Community Consortium and Schmidt Futures. Their paper, “A Computational Approach to Earlier Detection and Intervention for Infants with Developmental Disabilities,” received a $7,500 grant to support future research.

That team includes her Ph.D. advisor, Maja Matarić; Chan Soon-Shiong Chair, Distinguished Professor of Computer Science, Neuroscience and Pediatrics, and Interim Vice President of Research at USC; Beth Smith, an assistant research professor in the USC Division of Biokinesiology and Physical Therapy; and Fei Sha, associate professor of computer science and biological sciences and Zohrab A. Kaprielian Fellow in Engineering.

Together, they are researching ways that robots could make a difference in the lives of children with developmental disorders. Their work aims to help earlier diagnose children with conditions ranging from learning disabilities to Autism Spectrum Disorder. Earlier diagnoses, experts say, allow for earlier interventions and better outcomes.

In their paper, Klein, Matarić, Smith and Sha propose using a robot toy to interact with an infant to encourage certain behaviors. These behaviors are known as exploratory motor movements—important infant behaviors such as reaching, touching, grasping and kicking that help them learn to control their bodies and interact with their surroundings. Exploratory movements are believed to be important for healthy cognitive, motor and social development.

“Based on this, we can look for infants who make decreased exploratory movements and design and evaluate interactions that could increase these movements,” Klein said. “These interactions are aimed toward children at risk for developmental disabilities, though we anticipate it may be supportive for typically developing infants as well due to the importance of early exploratory motor movements.”

The team’s past research placed an infant in a chair across from a humanoid Nao robot, which interacted with infants by responding to movement. Whenever the infant kicked their leg, the Nao robot would also kick one of its legs. Twelve infants between the ages of 6 and 8 months participated in this first study, which has been published in a paper titled “Socially Assistive Infant-Robot Interaction: Using Robots to Encourage Infant Leg-Motion.”

The study observed that once babies made the connection between their own movement and the movement of the robot, they increased their kicking. Babies at risk for developmental disorders, such as ADHD or ASD, may perform differently in this paradigm. They may demonstrate difficulty learning the connection between their movement and the robot response, supporting its use in early detection. Alternatively, they might respond very well to the robot, supporting its use as an early intervention tool.

“Our preliminary study gave us a lot of insight, which helped to inform the research proposed in the white paper,” Klein said.

Klein and her team’s white paper outlined how they plan to build upon their current work with the Nao robots and pursue future research, one possible avenue being by exploring the use of Sphero robots in encouraging infant motor movement.

In past studies, the team used the Nao robot platform as an effective socially assistive robot to both provide contingent rewards and allow researchers to evaluate whether infants would imitate the robot, but they had some limitations that Klein’s team hope Sphero robots can address. Nao robots cost thousands of dollars, while Sphero robots are much more affordable, at about $150 per robot. Additionally, Nao robots can only move in certain directions, which limits the range of motion that can be encouraged, while Sphero robots can safely roll around the baby, encouraging a wider range of motion while simultaneously engaging the infant’s attention more effectively.

Their paper outlines their plan to record interactions between the infant and the robot on video, use software to characterize the movements of the infant’s limbs and head, and sort these movements to classify if the infant is at risk for a developmental disability.

Their white paper also proposes analyzing infant-caregiver interaction during play, as social interactions between parent and caregiver are essential to child development. This work is currently ongoing.

“We are analyzing videos of infant-mother interaction with infants at various ages to create computational models of these interactions, and potentially use these models to help characterize infant development and responsiveness in infant-mother communication,” Klein said.

“The ultimate goal of our research would be to create an approach for affordable, in-home interventions utilizing socially assistive robots that use play to improve healthy development in young children,” Klein said.