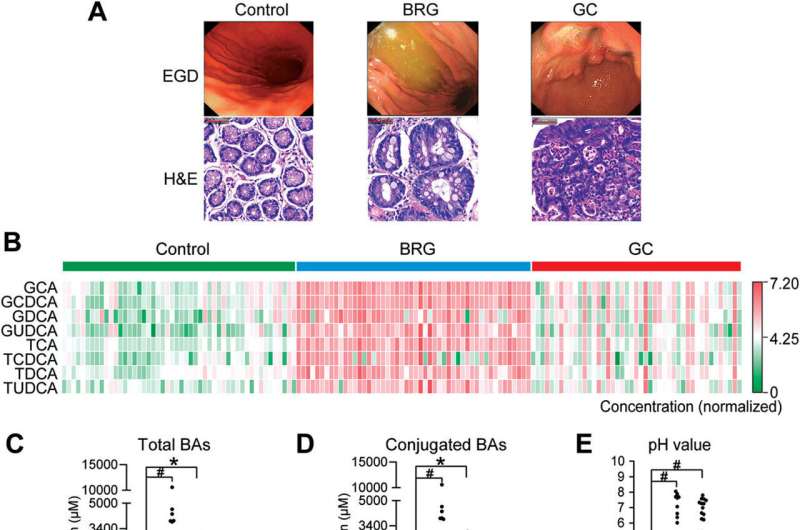 Research led by the School of Chinese Medicine at Hong Kong Baptist University (HKBU) has identified cryptotanshinone, a compound extracted from the Chinese herbal medicine Salvia miltiorrhiza, with the potential for the treatment and prevention of gastric cancer associated with bile reflux.

The researchers unveiled the mechanism of how bile reflux induces gastritis and gastric cancer. They explained that refluxed bile acids (BAs) lead to the proliferation of pro-inflammation bacteria that promote gastric carcinogenesis, the formation of cancer.

The research findings have been published in Advanced Science.

Bile, secreted by the liver, is stored in the gallbladder and is released to the duodenum to help digest fat. When the pylorus connecting the stomach and the duodenum is damaged or fails to work properly, bile in the duodenum can enter the stomach, causing gastritis. People with stomach surgery complications, peptic ulcers or gallbladder removal surgery have higher risks of bile reflux. However, the mechanism of how bile reflux induces gastric carcinogenesis remains unclear.

Professor Jia says, “We unveiled for the first time the underlying mechanism by which bile reflux promoted the development of gastric carcinogenesis. It offers important clinical insights on the development of novel prevention and therapeutic approaches for the disease. Based on the newly discovered mechanism, we identified cryptotanshinone as a potential Chinese medicine-based pharmaceutic agent for the prevention and treatment of gastric carcinogenesis due to bile reflux.”

The phenomenon is explained by the fact that BAs are weak acids compared with strong gastric acid, and their influx into the stomach changed the gastric environment by upsetting the normal acid-base balance of the gastric juice. Further investigation found that a specific type of BA, called taurodeoxycholic acid (TDCA), showed a strong positive correlation with pH value of gastric juice samples of the BRG and GC groups.

Previous studies showed that bile reflux is closely related to chronic gastric inflammation and gastric carcinogenesis. The researchers thus examined the concentrations of lipopolysaccharide (LPS), a pro-inflammation cytokine, in the gastric juice of the 145 subjects above, and found that the BRG and GC groups have LPS concentrations significantly higher than those of the control group.

As LPS is produced and found in the outer membrane of certain kinds of bacteria, the researchers applied gene sequencing and other techniques and confirmed that LPS-producing bacteria are significantly more abundant in the gastric juice of BRG and CG groups compared to the control group. Among these LPS-producing bacteria, a species called P. melaninogenica had the highest relative abundance.

From these experimental results, it is suggested that bile reflux induces significant changes in the gastric environment, alters the gastric microbiota, and results in the development of gastritis and gastric carcinogenesis.

The hypothesis was tested with a series of in vitro and in vivo experiments in mice, which confirmed that application of TDCA and LPS promotes gastric epithelial cell proliferation, and induces gastric inflammation. Cellular and molecular analysis revealed that P. melaninogenica promoted gastric inflammation in mice by activating the IL-6/JAK1/STAT3 pathway, a chain of interactions between proteins in a cell involved in processes such as immunity, cell division, cell death, and tumor formation.

After unveiling the mechanism of bile reflux-induced gastric cancer, the researchers turned to explore a corresponding preventive and therapeutic approach. They focused oncryptotanshinone, a bioactive compound isolated from the roots of Salvia miltiorrhiza,which is a Chinese herbal medicine that facilitates blood circulation with an anti-inflammatory effect. Cryptotanshinone is also known as an inhibitor of the STAT3 signaling pathway in cells.