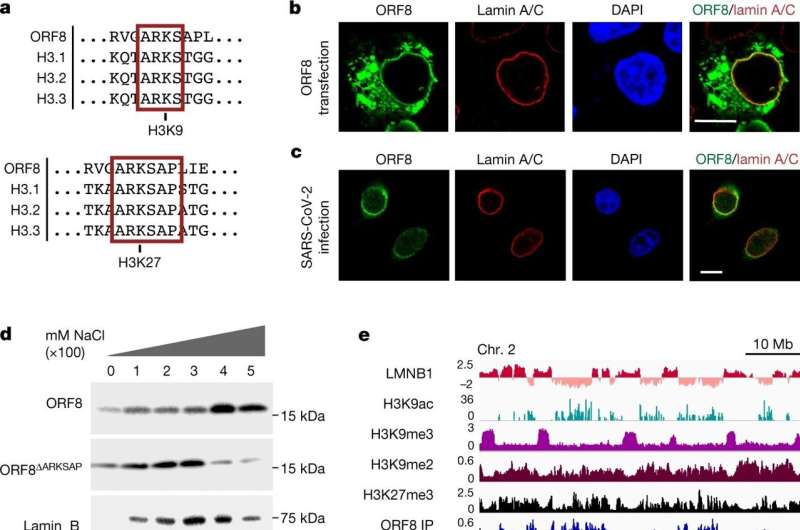 In their paper published in Nature, the group describes how they compared proteins that package human DNA with proteins produced by the SARS-CoV-2 virus and what doing so showed them. Lisa Thomann and Volker Thiel with the Institute of Virology and Immunology, Bern and Mittelhäusern, have published a News & Views piece in the same journal issue describing the work done by the team on this new effort.

As the pandemic has worn on and lessened, medical researchers have continued to study the virus behind it, and one of the areas they have focused on is its remarkable ability to suppress a response by host cells in those infected. In this new effort, the researchers have taken a closer look at the relationships between proteins that package DNA in human cells and proteins produced by the SARS-CoV-2 virus.

Prior research has shown that the SARS-CoV-2 virus produces three main types of proteins; those involved in replication, those involved in structural processes and a third that are known as accessory proteins.

The third type is involved in a wide range of activities. Prior research has also shown that human DNA is packaged in proteins known as histones—they serve to hold the DNA strands in place and to serve as gatekeepers for materials that read the strands and use that information to engage in activities such as signaling to other body parts. Some such signaling is involved when a host is infected to urge defense mechanisms to fight the intrusive agent.