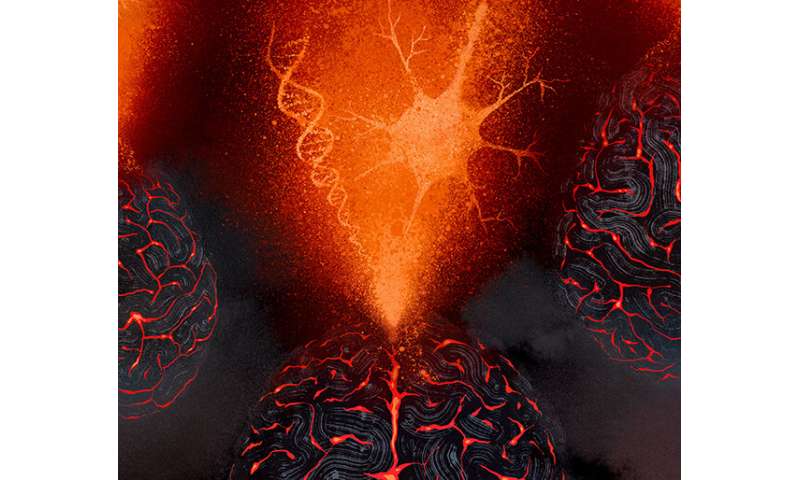 Scientists at the UNC School of Medicine and colleagues created a new computational tool called H-MAGMA to study the genetic underpinnings of nine brain disorders, including the identification of new genes associated with each disorder.

The research, published in Nature Neuroscience, revealed that genes associated with psychiatric disorders are typically expressed early in life, highlighting the likelihood of this early period of life as critical in the development of psychiatric illnesses. The researchers also discovered that neurodegenerative disorder-associated genes are expressed later in life. Lastly, the scientists linked these disorder-associated genes to specific brain cell types.

“By using H-MAGMA, we were able to link non-coding variants to their target genes, a challenge that had previously limited scientists’ ability to derive biologically meaningful hypotheses from genome-wide association studies of brain disorders,” said study senior author Hyejung Won, Ph.D., assistant professor of genetics at the UNC School of Medicine and member of the UNC Neuroscience Center. “Additionally, we uncovered important biology underlying the genetics of brain disorders, and we think these molecular mechanisms could serve as potential targets for treatment.”

Brain disorders such as schizophrenia and Alzheimer’s disease are among the most burdensome disorders worldwide. But there are few treatment options, largely due to our limited understanding of their genetics and neurobiological mechanisms. Genome-wide association studies (GWAS) have revolutionized our understanding of the genetic architecture related to many health conditions, including brain-related disorders. GWAS is a technique that allows researchers to compare genetic sequences of individuals with a particular trait—such as a disorder—to control subjects. Researchers do this by analyzing the genetic sequences of thousands of people.

“To date, we know of hundreds of genomic regions associated with a person’s risk of developing a disorder,” Won said. “However, understanding how those genetic variants impact health remained a challenge because the majority of the variants are located in regions of the genome that do not make proteins. They are called non-coding genetic variants. Thus, their specific roles have not been clearly defined.”

“Given the importance of non-coding variants, and that they make up a large proportion of GWAS findings, we sought to link them to the genes they interact with, using a map of chromatin interaction in the human brain,” Won said. Chromatin is the tightly packed structure of DNA and proteins inside cells, folded in the nucleus in a way to maintain normal human health.

Another important question in brain disorders is to identify cellular etiology—the cells involved in the root cause of disease. This is especially critical as the brain is a complex organ with many different cell types that may act differently in response to treatment. In the attempt of finding critical cell types for each brain disorder, the researchers found that genes associated with psychiatric disorders are highly expressed in glutamatergic neurons, whereas genes associated with neurodegenerative disorders are highly expressed in glia, further demonstrating how the two disorder clusters diverge from each other.

“Moreover, we classified biological processes central to the disorders,” Won said. “From this analysis, we found that the generation of new brain cells, transcriptional regulation, and immune response as being essential to many brain disorders.”

“Amongst the shared genes, we once again identified the brain’s early developmental process as being critical and upper layer neurons as being the fundamental cell-types involved,” Won said “We unveiled the molecular mechanism that underscores how one gene can affect two or more psychiatric diseases.”