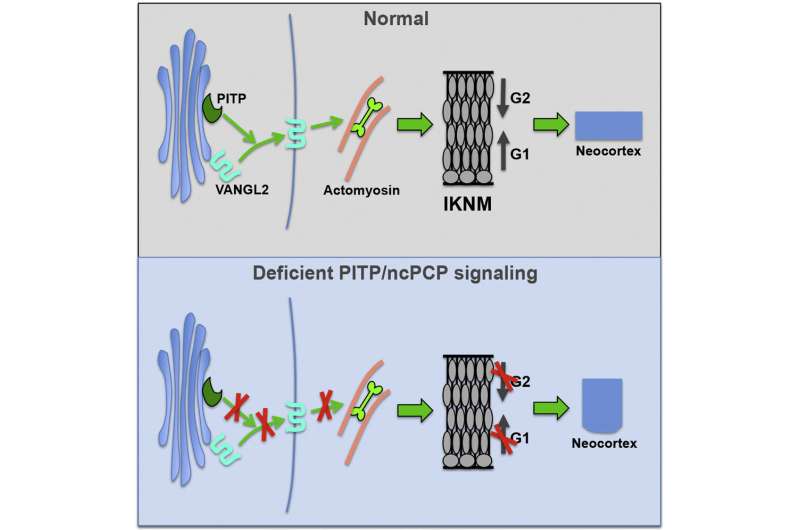 Scientists at the Texas A&M University College of Medicine have made a breakthrough discovery about the development of the brain. This new information contributes to our understanding of how the part of the brain that makes humans more intelligent than other mammals develops, and offers insights into what causes intellectual disabilities, including autism spectrum disorders.

For years, experts have known that a thin layer of cells in the neocortex—the part of the brain that controls higher order functions such as cognition, perception and language—is directly correlated with intelligence in mammals. The larger the surface area of the neocortex, the more highly developed the mental capacity of that organism. For example, the thickness of the human neocortex is only about three-fold greater than that of mice. Yet, the surface area of the human neocortex is 1,000-fold greater than that of mice. Malformations in this part of the brain progress to developmental deficits that include autism spectrum disorders and intellectual disabilities.

What’s not understood is how evolutionary expansion of this part of the brain occurs preferentially in favor of expanding surface area of the neocortex at the expense of increasing its thickness. How the earliest populations of neural stem cells—the building blocks of the brain—distribute themselves is a key factor in this process.

“There are many, what we’ll call, individual processing units that are horizontally arranged in the neocortex. The more surface area you have, the more of these processing units you can accommodate,” said Vytas A. Bankaitis, Distinguished Professor at the College of Medicine, E.L. Wehner-Welch Foundation Chair in Chemistry, and co-author of this study, which was published in Cell Reports. “The question is, why is the neocortical surface area so much greater relative to its thickness as one climbs up the mammalian evolutionary tree? Why do neural stem cells spread themselves in a lateral direction as they proliferate and not pile on top of each other?”

This question is key because when the cells do not spread out, but instead pile up, it creates a thicker neocortex with a smaller surface area—a characteristic that has been observed in cases of intellectual disability and even autism.

“One of the most studied genetic causes of intellectual disability is a mutation in a gene that was originally called LIS1,” said Zhigang Xie, assistant professor at the College of Medicine and co-author of the study. “This genetic mutation will cause a smooth brain, which is associated with intellectual disability. And one typical observation is that the neocortex of the patient is thicker than normal. There are also very recent studies that identify common differences in the brain of autism that include abnormally thickened regions of the neocortex in those individuals.”

Scientists have known for some time that as neural stem cells divide, their nuclei move up and down within their anatomical space as a function of the cell cycle, a process called interkinetic nuclear migration. They do so by employing a cytoskeletal network that acts like train tracks with engines that move the nuclei up or down in a closely regulated manner. Although several ideas have been proposed, it remains an enigma why the nuclei move in this way, how this network of train tracks is controlled, and what role interkinetic nuclear migration plays in development of the neocortex.

In their study, Xie and Bankaitis provide answers to these questions.

As for why, Bankaitis explains that when there are so many cells so close together in the embryonic stage of neocortical development, the movement of their nuclei up and down causes opposing upward and downward forces that spreads the dividing neural stem cells out.

“Think about a tube of toothpaste,” Bankaitis said. “If you were to take that toothpaste tube, put it between your hands, push up from the bottom and push down from the top, what would happen? It would flatten and spread out. That’s essentially how this works. You have an upward force and a downward force caused by the movement of the nuclei that spreads these cells out.”

Xie and Bankaitis also demonstrate how the cells do this by linking together several distinct pathways that cooperate to “tell” the newborn neural stem cells where to go.

“I think for the first time, this really puts together molecules and signaling pathways that indicate how this process is controlled and why it would be linked or associated with neurodevelopmental deficiencies,” Bankaitis said. “We have taken a biochemical pathway, linked it to a cell biological pathway, and linked it to a signaling pathway that talks to the nucleus to promote the nuclear behavior that generates a force that develops a complicated brain. It’s now a complete circuit.”

The results of this study uncover an important factor in the underlying causes of autism risk, intellectual disabilities and neural tube birth defects. The new knowledge on the basic principles regulating the shape of the neocortex will also help the design of in vitro brain culture systems that more accurately reflect the developmental processes of interest and improve the prospects for neurological drug development.