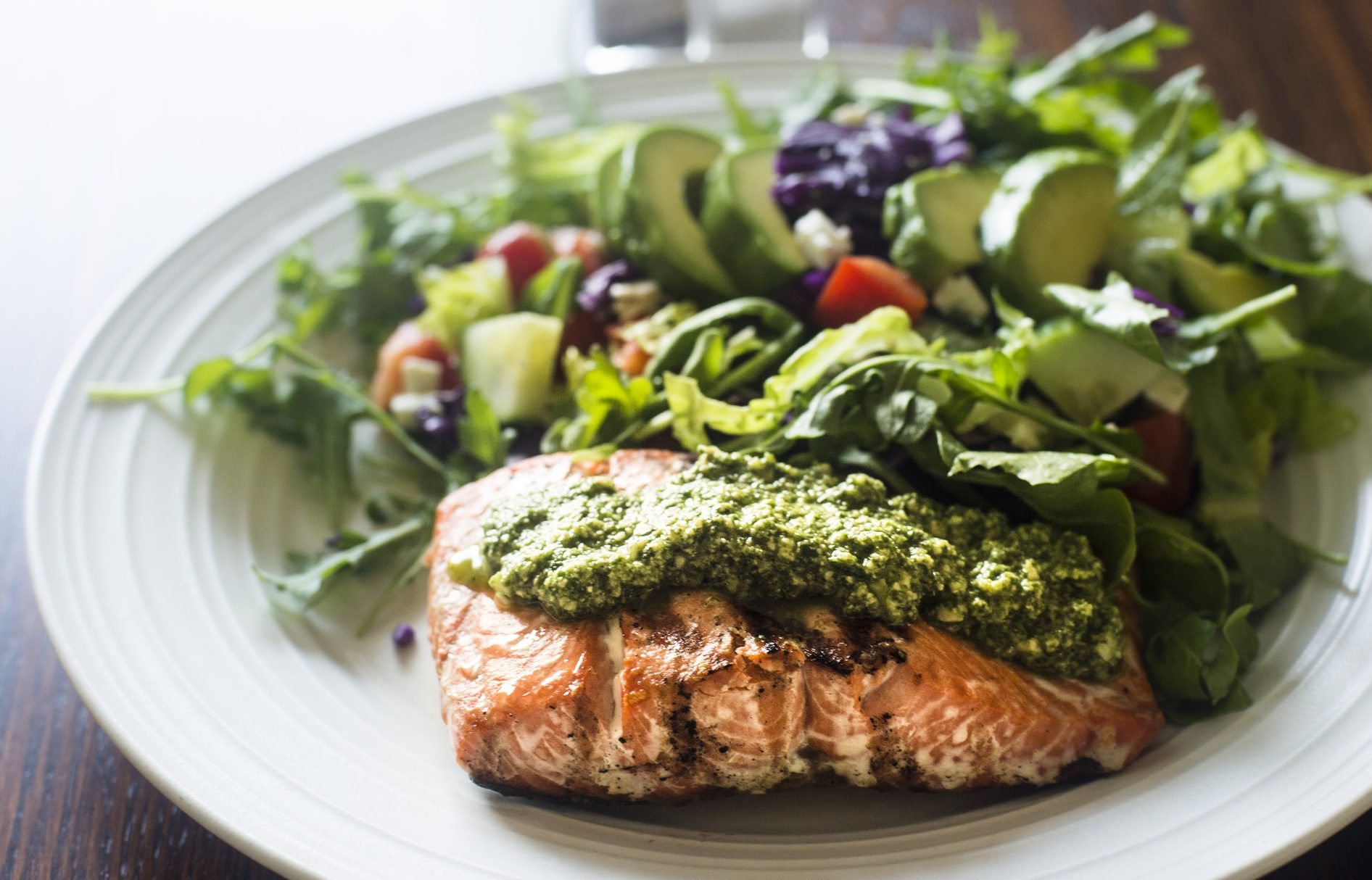 The most Googled food-related topic in the world last year was ‘keto’, with 25.4million searches, according to business consultancy Bolst Global.

The low-carbohydrate, high-fat ketogenic diet was originally developed by doctors to help children with drug-resistant epilepsy.

Hollywood star Halle Berry uses it to control her Type 2 diabetes and credits it with slowing down the ageing process. High School Musical star Vanessa Hudgens, fellow American actress Megan Fox and model Kourtney Kardashian have also spoken about the benefits of their low-carb/keto lifestyles.

‘Most people would benefit from cutting back on the amount of carbohydrate they eat,’ says Dr Sarah Brewer, a registered doctor and medical nutritionist. ‘Carbs were promoted after the Second World War because they were cheap and this has helped fuel the obesity crisis.

‘Eating less than 50g carbohydrate per day encourages the body to burn fat as fuel, rather than sugar (glucose).

‘When you burn fat for fuel, the liver turns some into ketones and this physiological state is called ketosis. Because you are burning fat, this helps promote rapid weight loss.

A low-carb diet also reduces the secretion of insulin, which is the main fat-storing hormone. The results from 13 clinical trials found that people following a very low-carb diet (keto), with no more than 50g carbohydrate per day, showed a significantly greater decrease in bodyweight, lower levels of triglycerides, lower diastolic blood pressure and beneficial effects on good HDL-cholesterol, compared with those following a low-fat diet.’

While the diet is promoted as needing to be high in fat to work, that’s not necessarily the case.

‘I came across the keto diet when I was reading the British Medical Journal in 2000,’ says Hannah Sutter, founder of ketogenic food delivery service, Natural Ketosis.

‘The medical research published showed that, when done properly, a ketogenic diet can help manage diabetes and make you healthier. I was fascinated as to why eating fat and reducing carbs would be good for you, so I spoke to a cardiologist friend who confirmed carbs were the reason you get a massive insulin spike, and that fat without carbs does not trigger fat storage.

‘However, too much fat is a problem and you need to focus on “good” fats like avocados and steer clear of “bad” fats such as saturated fats.’

After launching the home-delivery service, in 2016 Hannah went on to launch Ketocarefoods — a medical business that provides food for people prescribed a keto diet on the NHS — followed this year by Fatt, a keto snack brand with no sweeteners
or “nasties”.

Hannah adds: ‘One of the biggest problems with the keto diet is the lack of fibre and at Natural Ketosis we use lots of prebiotic fibre and ensure people get the right amount of fats, carbs and protein. It’s basically a clean, well-formulated keto diet.’ It usually takes three to four days to get into ketosis and once you’re in this state, people report significant weight loss in the first week alone.

‘It’s a delicate balancing act because just 10g extra of carbohydrate can shift your body back into carb and sugar burning. ‘Once you’re keto adaptive, the body gets really good at switching from carbs to fat burning and a lot of athletes follow something called Keto-Cycling, which is alternating between a regular ketogenic diet and break days,’ continues Hannah.

‘The only danger with this for a normal person is that they are not doing a huge amount of exercise to burn the carbs.’

Studies show a ketogenic diet can help with epilepsy, Type 2 diabetes and Parkinson’s disease. As well as weight loss, benefits are thought to include better skin and hair, possibly down to eating more healthy fats. But what are the negatives? ‘Keto flu’ is common, with symptoms that can include headache, brain fog, fatigue, nausea and constipation.

There’s also the sweet breath that comes with having raised levels of ketones in your body.

As with all diet regimes, keto has its detractors and it’s best to seek medical advice before starting any kind of weight-loss programme. However, in her book, Big Fat Lies: Why The Government Is Making You Fat, Hannah claims the NHS Eatwell Guide is driving the obesity crisis.

‘It shows about 60 per cent of our plate should be carbs,’ she says.

‘Yet studies show again and again that carbs drive up insulin levels and it’s insulin that forces the body to retain fat, so it seems insane to be recommending that to people.’

The downside of the ketogenic diet

‘The ketogenic diet practically rules out any carbohydrates whatsoever, which means severe reduction of fruits and vegetables, plus wholegrains, beans and legumes,’ says clinical nutritionist Suzie Sawyer, of Feel Alive.

‘Since these food groups contain an array of frequently depleted micronutrients, plus protective antioxidants, it potentially puts the body at risk from longer-term health issues.

‘A severe reduction in carbohydrates also means less insulin is produced to keep blood sugar levels balanced. This triggers an increase in sodium excretion via the kidneys, meaning less water is retained.

‘Carbohydrate is stored as glycogen, primarily in the muscles with water, hence water weight will be lost at the start of the diet. However, as the body moves into ketosis, with less water now being retained, dehydration and electrolyte imbalance may become an issue.

‘This can lead to fatigue, muscle cramps and diarrhoea (often referred to as “keto flu”). Lack of magnesium, sodium and potassium are the common culprits.

‘It’s essential therefore to keep very well hydrated if following this diet but importantly to supplement with a high-potency multivitamin and mineral to plug nutrient gaps.’

Vicki-Marie tries keto for herself

With my summer body still to emerge from its lockdown cocoon, I wanted to see what all the fuss was about, writes Vicki-Marie Cossar (pictured above). Natural Ketosis creates carefully calculated meals and snacks that are low in carbs but rich in good fats and fibre. You choose a breakfast, lunch, dinner and snack for each day and it’s delivered direct to your door. Nothing needs to be refrigerated as you provide the perishables — ie, for breakfast, the granola needs berries and yogurt and dinners need vegetables.

The seed and chocolate granola is delicious, although with just 30g of yogurt I wasn’t sure it would fill me up. But it did and made me think about portion control. Lunch is a selection of soups (Mushroom, Tex Mex, Thai Chicken etc) which are tasty, but very rich, heavy and oily (which I assume are the healthy fats). You are allowed to swap them out for a salad, however, which I did most days.

Dinners included Chicken and Mushroom Fricassee, Sausage Casserole and Coq au Vin. All great-tasting, but I found the meat inside quite limited. The snacks include super-filling Pork Crunch crisps, and flavoured bars that curbed sweet cravings. There are four treats (cookie, brownie etc), so I didn’t go without my sugar fix. The plan suggests extra snacks if you’re still hungry, such as half an avocado, 50g cured meats, 40g hard cheese and 50g nuts and unlimited eggs a day.

My verdict on the keto diet

Saying goodbye to carbs was really hard to start with and it took me three to four days to get into ketosis, which is when I stopped feeling as hungry. I felt very lethargic by day three and had a headache, too, but once this passed I had more energy and a clear head. By day seven, I was nowhere near as hungry and had no cravings, but I missed the convenience of bread. I indulged in low-carb Hard Seltzers at the weekends and still lost 9lbs in 14 days.

The humble sandwich can still be enjoyed with the Seriously Low-Carb Loaf. Fluffy and light in texture, it has only 0.9g of carbohydrates per slice and zero sugar, and is packed with protein and fibre.

Whether it’s for cereal or a sweet treat, Grandma Crunch is a plant-based, high-protein, zero-sugar cereal. It has just 5g of net carbs and is also gluten-free. It comes in cinnamon, coconut or cacao flavours.

Keto-specific and made with all-natural ingredients, Raw Gorilla Chocolate Granola contains absolutely no nasties. It has just 6g of carbohydrate per serving and tastes great paired with Greek yogurt and berries.

Buy for £6.49 in store at Whole Foods Market

Looking for an alternative to rice? FullGreen Riced Cauliflower contains 4g of carbohydrates and has 20 calories per serving. Simply heat for two minutes and then add to salads, tabboulehs and dinners.

Buy a variety pack for £6 (four bags) from nutriliciousme.co

With zero carbs and zero sugar, Nexba soft drinks are basically purified sparkling water with 100 per cent natural ingredients, for when you want a change from plain water.

This article contains affiliate links. We may earn a small commission on purchases made through one of these links but this never influences our experts’ opinions. Products are tested and reviewed independently of commercial initiatives.

How to get your Metro newspaper fix

Metro newspaper is still available for you to pick up every weekday morning or you can download our app for all your favourite news, features, puzzles… and the exclusive evening edition!