‘I should never have been given the choice’: Singer reveals she was asked if she wanted her leg amputated when she was six but put off the life-changing operation until she was 22

A singer has revealed was forced to make a life-changing decision about having her foot amputated when she was just six years old.

Jaye Elle, from Texas, chose to have leg-lengthening surgery at 13 years old instead, but endured years of agony before finally getting her leg amputated at 23.

The 24-year-old was born with a fibular hemimelia, a deformity or absence of the fibula bone in the leg, which doctors picked up when she was a day old.

She said: ‘As was my case, children are sometimes being forced to make decisions they should never have to make at such a young age.’ 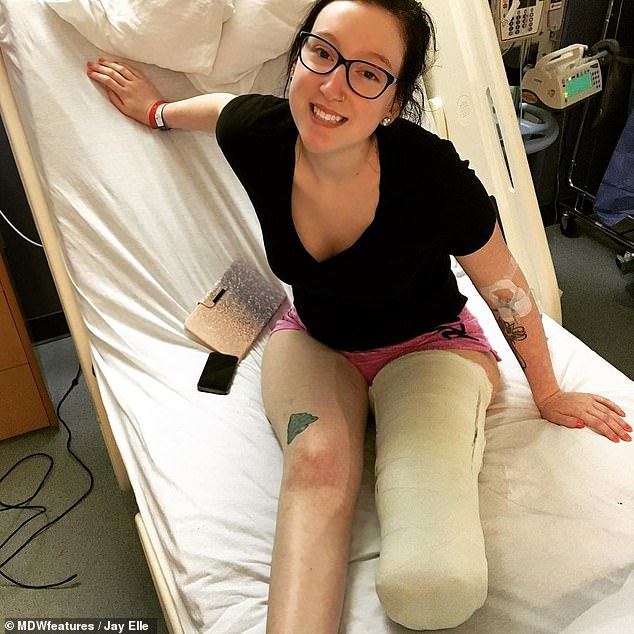 Jaye Elle, from Texas USA, was forced to make a life-changing decision about a foot amputation when she was just six years old. She didn’t have the amputation until she was 22 years old, after years of agony and a failed leg-lengthening surgery at the age of 13

Miss Elle endured years of agony before finally getting her leg amputated at age 22, 16 years after she was forced to make the decision. Pictured before her surgery

Miss Elle, a singer and songwriter, was unable to stand for more than 15 minutes following leg-lengthening surgery. Now, she can normal things she ‘never dreamed’ of being able to do

Recalling the moment she was asked about having her log amputated when she was six years old, Miss Elle said: ‘My parents and doctor gave me a choice to amputate or have a leg-lengthening surgery.

‘I was only six years old and trying to make a major life decision that no six-year-old should ever be asked to make.

‘As there was so much pressure on me, I said I would have the surgery.’

However, the surgery never went ahead because Miss Elle was too terrified of what would happen.

She said: ‘When the nurses came in to prep me, I threw my stuffed animals at them and cried.

‘My parents tried to tell my doctor to just put me to sleep but he said no because it had to be my decision.’

The traumatised youngster said ‘no’ to the surgery but felt guilty afterwards.

‘I spent the next seven years feeling like I was being punished for making my parents disappointed in me,’ she said.

Miss Elle grew up wearing a prosthetic foot underneath her natural foot and decided to try the leg-lengthening surgery when she was 13.

She said: ‘I started wearing a prosthetic when I was only months old as I was learning to walk.

‘The prosthesis did what it was supposed to do but nothing could truly relieve the deformity of my foot putting a strain on me.’ 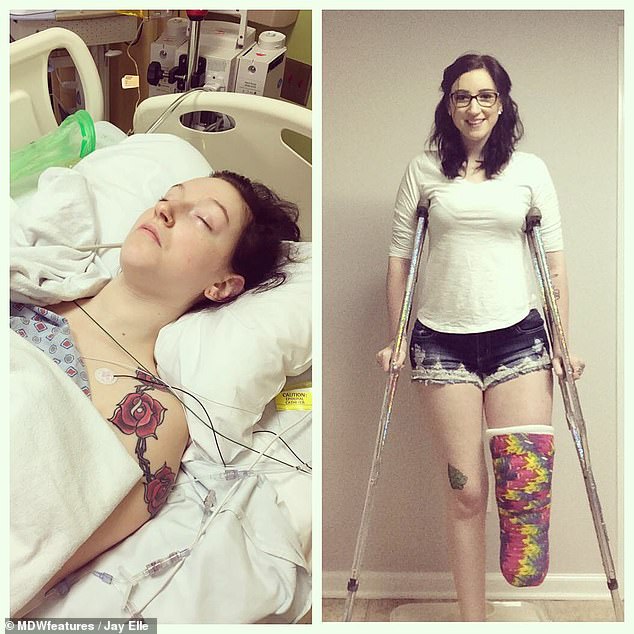 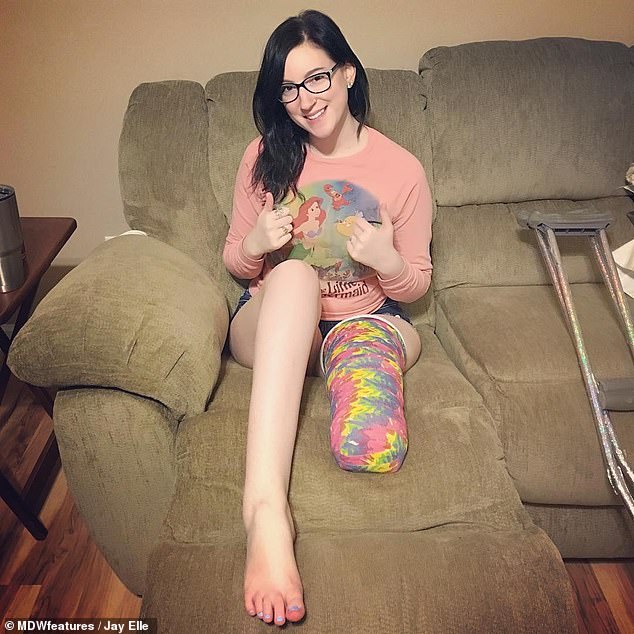 However, it proved to be too late, as by this age her growth rate had slowed down and the surgery was ineffective.

Miss Elle said: ‘It did virtually nothing for me. They broke my femur and put two and a half metal rings around my thigh with pins through the skin and into the bone. I would turn the pins every day to break the bone more.’

Eventually, the pain Miss Elle was experiencing became too much, with callouses on the bottom of her feet and an inability to stand.

‘The deformation of my foot was just one of the results of my missing fibula. Along with it came uneven hips and uneven knees’, she said.

‘My main issue was that I was in so much pain – I could stand for 15 minutes and my foot and ankle would be screaming at me to sit down.’

Miss Elle eventually decided to put her pain to an end and undergo an amputation in October 2016 after years of researching the surgery and feeling her condition deteriorate.

When it came to the time of her amputation, she admitted that it was the easiest decision she had made because she was so ready to change her frustrating life.

‘People tell me that it must have been a really hard decision to go through with the amputation, but knowing all the research I had done, it was one of the easiest decisions I’ve ever made,’ said Miss Elle.

‘It was definitely hard to completely wrap my mind around and every day I was counting down trying to say “goodbye” to my foot, but I knew it was for the best. 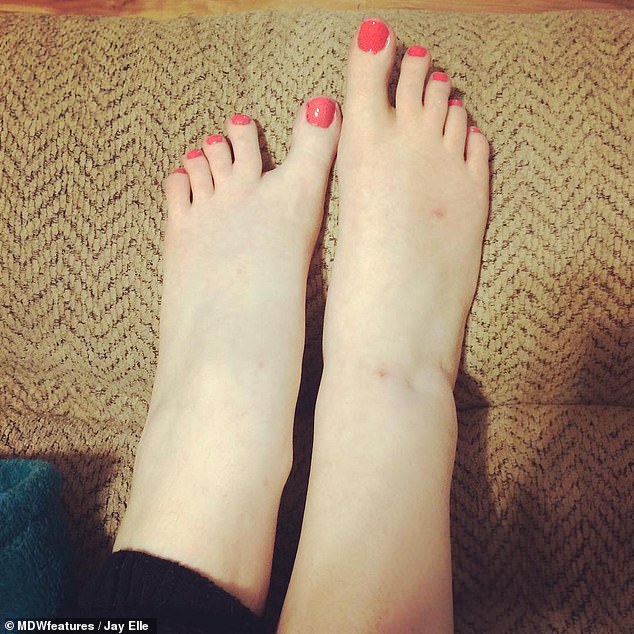 Miss Elle was found to have fibula hemimelia when she was a day old. This condition meant that her fibula bone was missing, and her leg became shorter than her normal leg 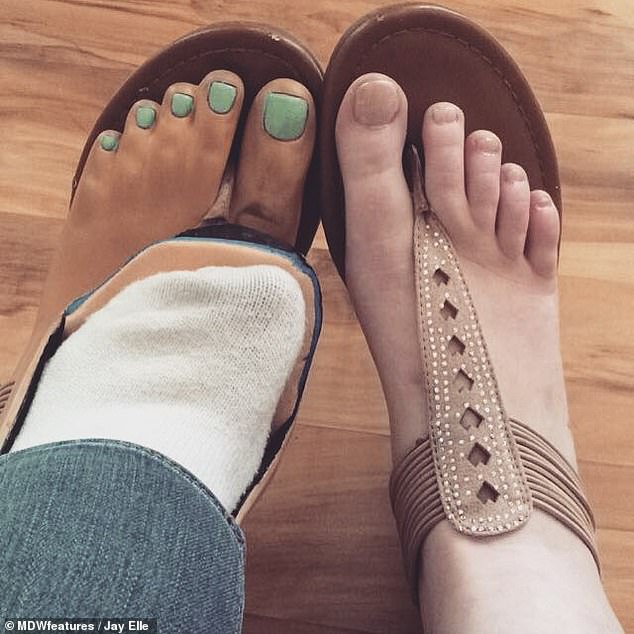 She said: ‘Waking up after my amputation was actually the most pain I’ve ever had in my life. Even with the pain medicine, my leg was so swollen, and I’d lost so much blood that I couldn’t do anything but cry.

‘The whole time I was in the hospital I kept saying I could feel my big toe and that it really hurt, but it wasn’t there anymore.

‘Recovery was extremely difficult, but it made me realise how strong I actually am. I learned to do anything I could do on my feet from within a wheelchair.’

Now, Miss Elle is able to do things she ‘never dreamed’ she would be able to.

She said: ‘One day I had been standing for eight hours straight and hadn’t thought anything of it until I realised I had done it.

‘I’m now working out at the gym, doing normal household activities with no help and walking better than I ever have. I never dreamed I’d be able to do those things.’ 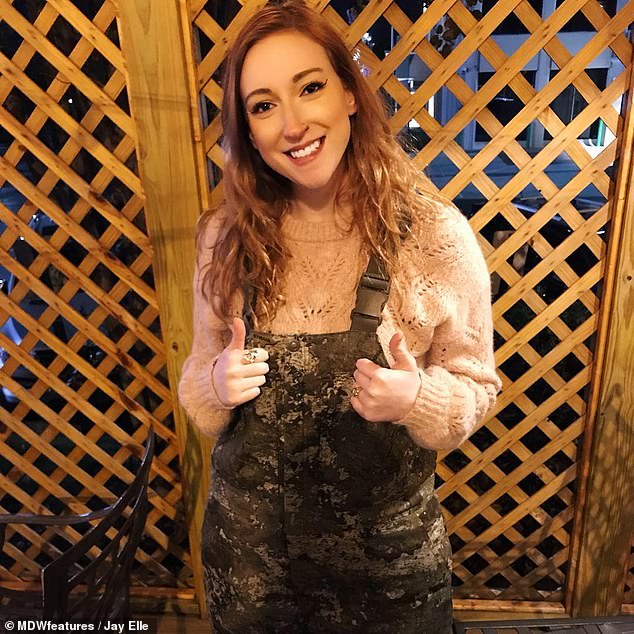 ‘Children are sometimes being forced to make decisions they should never have to make at such a young age’, Miss Elle, who wants to raise awareness of fibula hemimelia, said.

Miss Elle now hopes to raise awareness for fibular hemimelia so other six-year-olds aren’t forced into making the same life-changing decisions she once was.

Her parents were told she had fibular hemimelia one day after she was born. Miss Elle said: ‘My parents didn’t know anything was wrong with me until 24 hours after I was born when the doctor pointed out the dimple in my leg and said it meant something was missing.

The condition, which is estimated to occur in one in 25,000 births, is a partial or total absence of the fibula bone in the calf.

‘I didn’t really know anything was wrong with me until I got to the age where kids asked me “what happened?”‘, said Miss Elle. ‘I didn’t understand because I wasn’t injured, it was just the way I was born. It was all I knew.

‘Eventually I realised that I was different, but I was encouraged to not let my differences hold me back from doing anything anyone else could do.

What is fibular hemimelia?

Fibular hemimelia is a partial or total absence of the fibula and is the most common form of lower limb deficiency present at birth.

There are two long bones in lower leg, the thicker one is called the tibia and the thinner one is the fibula. With fibular hemimelia the tibia is shorter than normal and the fibula is missing or underdeveloped.

A leg affected by fibular hemimelia will look shorter than an unaffected leg. The tibia may be bent and the foot may also be smaller than normal, bent outwards at the ankle and may have fewer than five toes. The knee is often also misshapen and may move abnormally.

Males are 50 per cent more likely to be affected than females, and the former Paralympic Oscar Pistorius had the condition.

Most cases of fibular hemimelia are thought to occur for no reason.

Treatment will depend on the severity of the condition and how normal the foot is.

If the foot is not sufficiently normally formed and the tibia is too short it may be best to amputate it through the ankle.

Prosthetic limbs can be used in almost all cases.

‘Amputation has made me so much stronger. I have learned so much about myself and exactly what I’m capable of through this process. With how bad my foot was before amputation, even my bad days now are better than any good ones back then.’

When people ask Miss Elle what happened to her, rather than divulging the full extent of her story, Miss Elle jokes and instead tells them it was a shark attack.

‘It’s faster than trying to tell them the whole story and describing how my foot was shaped’, she said. ‘It also adds humour to my situation as you must be able to laugh at yourself.’

Miss Elle wants to increase the awareness for her condition and to stop other children from being put in difficult situations, like she once was.

‘I would like to raise as much awareness for fibular hemimelia as possible,’ she said.

‘It’s a rare condition but people do have it and even with all the medical advancements, there’s still not a lot of information on it.

‘I think it’s something we need to fight hard to find out why it happens and then try to prevent it from happening. Parents are having to make hard decisions for their children about whether they should put their child through traumatic procedures or not.

‘As was my case, children are sometimes being forced to make decisions they should never have to make at such a young age.

‘You are in full control of what happens to you and you control how you react to your setbacks. You can either sit and cry because something bad happened or you can make the most of it and be an example to others.

‘You are in charge of your story – so is it going to be a tragedy or a success story? It’s your decision.’