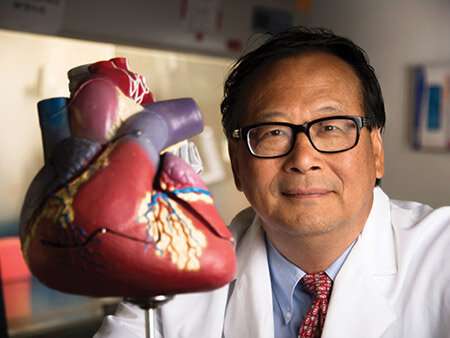 A novel treatment reduces heart damage after serious heart attacks in two animal models. Injections of two chemicals in a slow-release form significantly reduced the size of the dead heart tissue, known as the infarct, and improved the function of the left ventricle, as compared to untreated subjects.

The risk of death in patients after acute heart attacks is directly related to the size of the infarct, so a reduction in size is valuable. Heart attack patients form scar tissue to replace dead and dying heart muscle tissue, often followed by progressive heart failure over time as the damaged heart struggles to maintain pumping ability. The University of Alabama at Birmingham study of this novel treatment, published in JCI Insight, was led by Jianyi “Jay” Zhang, M.D., Ph.D., and Wuqiang Zhu, M.D., Ph.D. Zhang is professor and chair of the UAB Department of Biomedical Engineering in the UAB School of Medicine and School of Engineering.

The two chemicals are FGF1 and CHIR99021, or CHIR. FGF1 is a fibroblast growth factor, and CHIR is an activator of the Wnt signaling pathway—a group of signal transduction pathways that begin with proteins that pass signals into a cell through cell surface receptors. Each alone had shown some benefits, but the two had never been tested synergistically.

Zhang and colleagues encapsulated FGF1 and CHIR in poly-lactic-co-glycolic nanoparticles and injected the nanoparticles into the border zones of infarcts soon after experimental heart attacks in mice and pigs. A pig’s heart more closely resembles the human heart in size and biology. They showed that the nanoparticles slowly released the two chemicals over four weeks.

In both models, compared to untreated controls, the treatment improved cardiac function, reduced the size of the fibrotic scar, robustly stimulated growth of blood vessels in the left ventricle and prevented heart muscle cells near the infarct from undergoing apoptosis, which is a programmed cell death. The UAB researchers also found the treatment promoted the cell cycle of endothelial cells and smooth muscle cells, both in animals and in culture.

“Taken together,” Zhang said, “these data demonstrate for the first time, to our knowledge, that the combination of CHIR and FGF1 results in cardioprotection in vivo that is evidenced by a substantial reduction of infarct size and by improved left ventricle chamber function. As cardiomyocyte regeneration from cardiac progenitor cells is minimal in the mammalian adult heart, salvaging the myocytes that are otherwise destined to die remains the most important objective in cardiovascular sciences.”

The UAB research team began by screening chemicals for the capacity to enhance the cell cycle of cardiomyocytes that were induced from human pluripotent stem cells. They found a combination of a certain concentration of CHIR99021 and FGF1 was the most potent treatment to induce the cell cycle. They encapsulated the two chemicals in nanoparticles, demonstrated their release kinetics and showed that four different types of cells took up the nanoparticles at similar rates.

When the researchers tested injections of the nanoparticles into hearts in the pig and mouse heart attack models, they were surprised by the result: In contrast to the screening, the cardiomyocyte cell cycle was negligible.

To probe the mechanisms underlying the cardioprotection seen in the animal models, they found that CHIR-FGF1 nanoparticles enhanced the cell cycle of endothelial and smooth muscle vascular cells in cell culture. The researchers found transcriptional changes in human umbilical vein endothelial cells after the nanoparticle treatment for genes involved in angiogenesis, cell proliferation, cell senescence and death. They also found elevated levels of cell-cycle regulatory proteins in the treated cells.