A machine-washable smart jumpsuit can track the development of babies at risk of suffering mobility issues, scientists say.

Four sensors attached to the arms and legs of the garment constantly collect data – logged for doctors to analyse – on the infant’s range of movement.

The jumpsuit was designed to be worn by babies at risk of developing disabilities, such as cerebral palsy, due to complications at birth.

Monitoring movement in babies could warn doctors if a baby isn’t moving normally, allowing infants to get treatment early on in life.

This could help minimise the impact of their condition on their life by preventing problems from getting worse over time.

Currently, milestones are used as reference for how a baby is developing. For example, a baby should be able to crawl within a year. 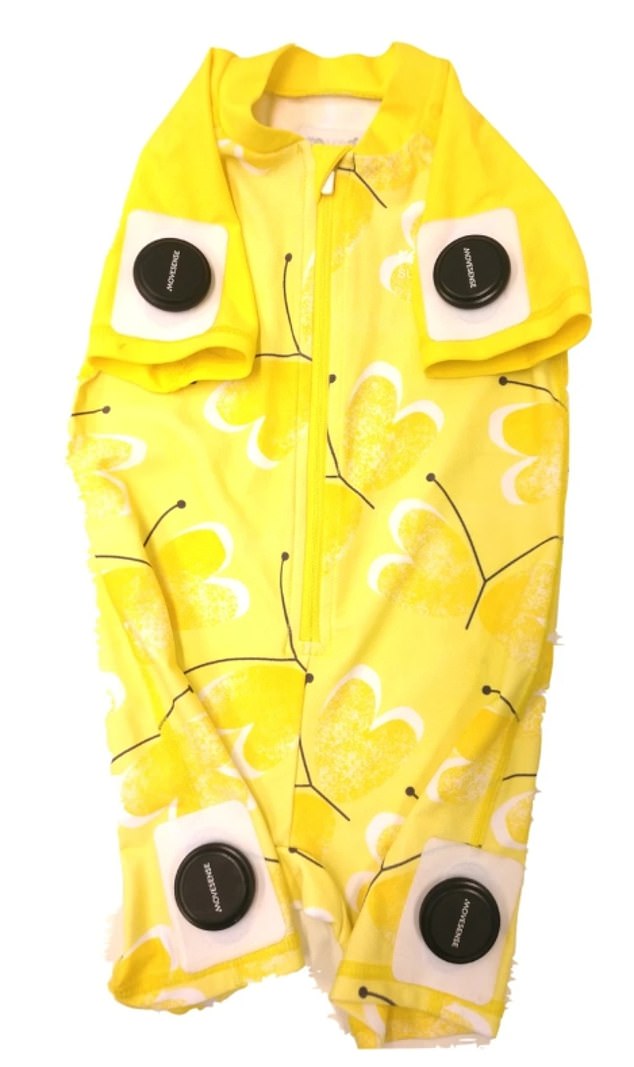 The suit, which can be washed at 40 °C, was created by scientists at the Helsinki Children’s Hospital in Finland. It has four sensors on the arms and legs (pictured)

The suit, which can be washed at 40°C (104°F), was created by scientists at the Helsinki Children’s Hospital in Finland.

There are many causes for motor delays in babies in children, which can leave them with floppy or stiff limbs, and the inability to stand.

Children born prematurely are particularly at risk because they may not develop muscles at the same rate as other children.

And babies who were starved of oxygen around the time of birth, known as asphyxia, are at risk of long-term disabilities and development delays.

They include cerebral palsy, which can leave sufferers wheelchair-bound with weak legs or random jerking movements. 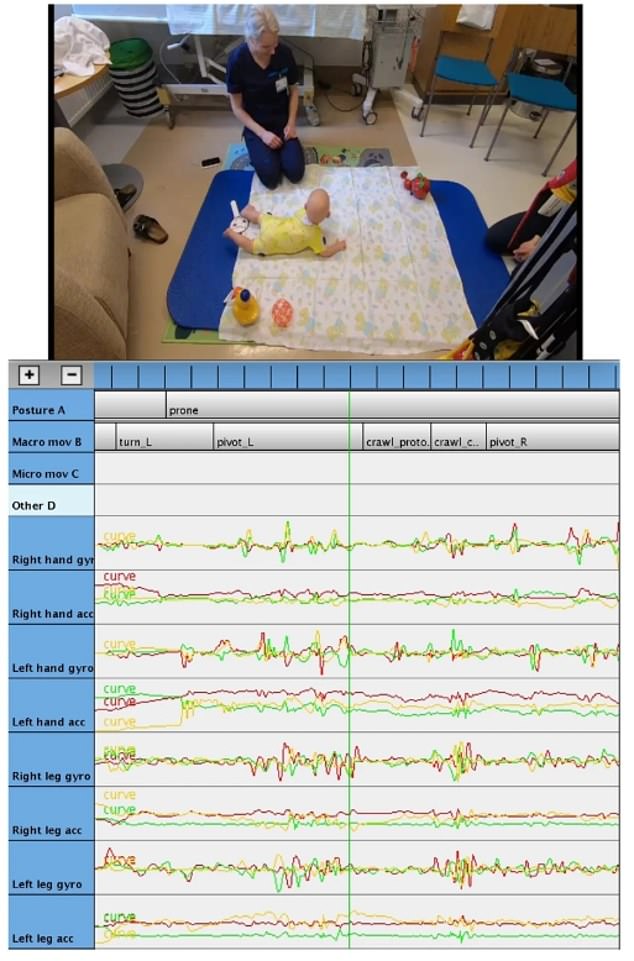 Babies played in the suit while the scientists were able to set up an algorithm. The babies were filmed (top), and the data was deciphered into movements (below)

HOW DO DOCTORS CHECK FOR MOBILITY ISSUES IN BABIES?

There are many different types of developmental delays in infants and young children which include ones that affect their movement – also known as motor skills or mobility.

If a baby has motor skill developmental delays, they may struggle to crawl, walk or use their fingers to grasp a spoon, for example, at the age they are expected to.

Falling outside the normal range isn’t always cause for concern, but should be raised with a doctor to take further tests.

This usually involves a paediatrician watching the baby and how they move and tests on muscles. If there is a concern, the baby may have genetic testing or an MRI, for example.

The high-tech suit was tested on 22 babies with an average age of seven months, according to the findings in the journal Scientific Reports.

Each baby played for 30 minutes to an hour while wearing the suit, designed to be as comfortable as a swimsuit.

A physiotherapist was there to engage the baby and make sure they tried different movements and postures – such as crawling on all fours and sitting straight.

All sessions were video recorded simultaneously, so that the researchers could log what was happening and link it to the jumpsuit data.

From this, an algorithm was developed to spot the babies’ movements and posture from the jumpsuit data.

The algorithm was able to detect the babies’ posture, such as sitting straight, 90 per cent of the time, New Scientist reports.

It correctly recorded movements 60 per cent of the time, which was described as ‘moderate’ success by the academics.

They wrote: ‘We developed a novel annotation scheme to classify infant postures and movements into a number of key categories, and demonstrated how an automatic classifier can reach human-like consistency in movement and posture recognition.’

Professor Sampsa Vanhatalo, the corresponding author of the paper, said the next study of the jumpsuit will look at 50 babies.

Half will have suffered a lack of oxygen around their time of birth, and therefore be at risk of motor development delays.

If the technology succeeds, it could help flag which infants might benefit from early interventions such as physical therapy.

The authors said: ‘As presented, the smart jumpsuit is a technical proof-of-concept, and it is not meant to showcase a ready commercial product.’