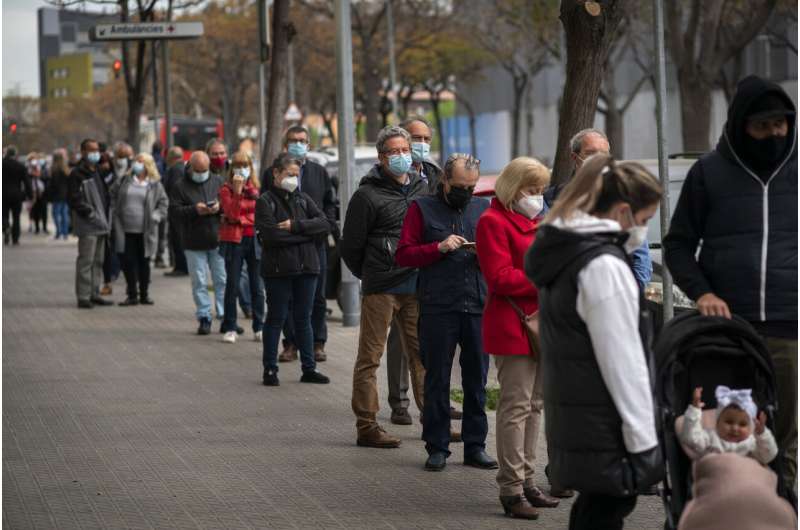 Spain joined other European nations on Wednesday in limiting the use of the AstraZeneca vaccine to the elderly due to concerns over links to extremely rare blood clotting.

Spanish Health Minister Carolina Darias announced after meeting with regional health chiefs that authorities would limit shots to those over 60 years old.

Until now, Spain has used AstraZeneca on its younger population, limiting it those under 65 years old. Darias said that authorities would now consider lifting that upper limit on the shot that forms a key pillar of the nation’s vaccination scheme.

“Our strategy with AstraZeneca is pivoting,” Darias said.

The decision comes hours after the European Medicines Agency said it had found a “possible link” between the shot and the rare clots.

Last week Germany and France limited the vaccine to elderly groups, and earlier on Wednesday British authorities recommended that the vaccine not be given to adults under 30.

The EMA advised no such age restrictions, while emphasizing that the benefits of the vaccine far exceed the very rare cases of thrombosis.

Spain was one of the European countries that briefly halted use of the AstraZeneca vaccine last month when the first blood clot scares were notified. Until now Spain had reserved Pfizer-BioNTech and Moderna vaccines reserved for those over 65.

Darias said that her administration would consider what to do with those Spaniard under 60 who have already received the first shot of the two needed for AstraZeneca to be fully effective. As of Wednesday, 2.1 million had received a first shot of the vaccine, while only 97 had gotten the second shot. It was not clear how many of those more than 2 million people waiting for a second shot were under 60.

Darias said that they will study the possibility of giving them a second dose of another vaccine, or leaving them with the one shot that would provide some protection.

The big shift in vaccine strategy comes a day after Spanish Prime Minister Pedro Sánchez told the nation that his government is sticking to its forecast of being able to vaccinate 70% of Spain’s adult population – some 33 million people – by the end of the summer.

Despite the about-face regarding the groups to receive AstraZeneca, Darias said that she is confident Spain will meet that milestone.

Over 2 million of the total of 9.3 million doses administered in Spain have been AstraZeneca shots, which are cheaper and more easily stored and transported.

“There are going to be changes to the vaccination strategy,” she added, mentioning plans to incorporate the Janssen vaccine in the coming weeks.