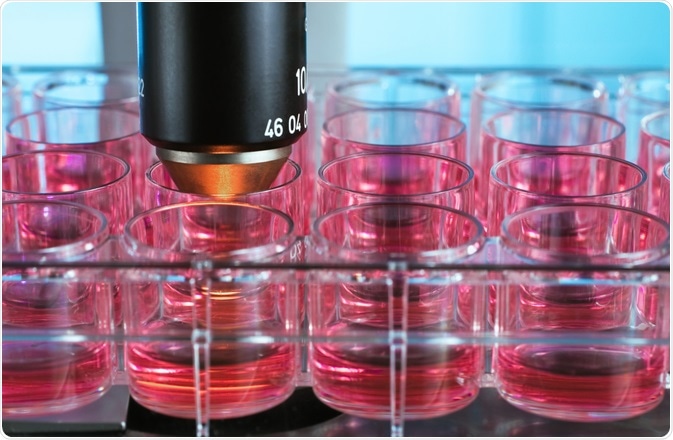 Conceptualized in 1990, it was six years later at the University of Turku that Stephen Hell and his colleagues developed STED microscopy.

As STED is able to produce imaging beyond the diffraction limit (the point at which molecules less than 200 nm can be distinguished from one another), super-resolved images can be produced.

With confocal microscopy, illumination is achieved by scanning one or more laser beams of light across a specimen. This allows an image (known as the optical section) to be produced.

The technique has enabled researchers to collect data from in vivo specimens and collect three-dimensional data. Though the technique has been beneficial, it is unable to avoid the issue that other conventional forms of microscopy face – it cannot exceed the diffraction limit.

STED uses a similar setup to confocal microscopy. It makes use of two lasers beams. One to excite fluorescent markers within a sample and one for depletion.

The focal spot of the excitation beam overlaps the doughnut-shaped focal spot of the depletion beam. This enables the selective targeting of molecules within a sample or specimen, allowing for high-resolution imaging.

Since its development, STED has proven itself to be a powerful tool for biomedical research. With STED, live cell imaging is possible through the fusion of green fluorescent proteins (GFP) to targeted proteins.

This was a significant step forward as it paves the way for future studies which will further investigate the link between the organization within the Nodes of Ranvier and the pathogenic mechanisms associated with neurodegenerative conditions.

A mode of STED microscopy, known as two-photon excitation STED, enables imaging in thicker tissue samples such as brain slices. In one of the first uses of this technique, the vesicles of caveolae (a form of lipid raft) were tagged using GFP and imaged.

When studying multiple structures or interactions at the same time, multicolored STED (m-STED) is a beneficial tool. There are various ways of employing m-STED, however some can be costly and complex as multiple lasers have to be used in order to garner results.

By coupling it with 4Pi microscopy, this issue can be overcome as 4Pi has 5-10 times better axial resolution than a conventional confocal microscope.

Photobleaching is a problem associated with the vast majority of SR techniques. However, this challenge is particularly prevalent with the use of STED. The bleaching of fluorescent markers is exacerbated by increased intensities from the doughnut-shaped laser beam.

When STED is coupled with total internal reflection (TIRF) microscopy, photobleaching can be reduced. TIRF as a microscopy technique is used to image fluorescent markers in aqueous environments which are close to a solid surface like a cover glass which has a high reflective index.

This highly effective technique produces imaging with few out of focus fluorescence and exposes markers within a specimen to less light, reducing the possibility of photobleaching.

SR techniques like STED have caused a tremendous shift in terms of resolution. While conventional techniques limited what could be imaged, more modern SR microscopy has enabled subtle interactions and details of cellular architecture to be observed.

Though STED has incredible potential and various applications, its use is often limited due to its cost and complexity. However, the desire of the biomedical research community to have better visuals will surely drive the increased use of STED in the future.

Maryam is a science writer with a passion for travel. She graduated in 2012 with a degree in Biomedical Sciences (B.Sc.) from the University of Manchester. Maryam previously worked in scientific education and has produced articles, videos, and presentations to highlight the association between dietary choices and cancer. She produces a range of articles for News-Medical, with a focus on microbiology and microscopy.