Student, 22, claims doctors labelled her ‘SUPERFICIAL’ for wanting scoliosis surgery to correct the 60-degree curve in her ‘wonky’ back

A student has claimed doctors labelled her ‘superficial’ for wanting scoliosis surgery to correct her ‘wonky’ back.

Emma Hall, from Sligo, Ireland, discovered her spine was different at the age of 13, but doctors predicted her condition wouldn’t get worse.

However, over the next seven years, the 45-degree curve in her back worsened by a further 15-degrees, leaving her self-confidence in tatters while at university.

Every day life had become excruciatingly painful, but the 22-year-old claims doctors ‘neglected’ her needs, viewing her as vain.

She eventually had life-changing surgery seven years after being put on a waiting list at the age of 15.

Scoliosis affects one in around 250 children in the UK and up to three per cent of the US population, according to statistics. 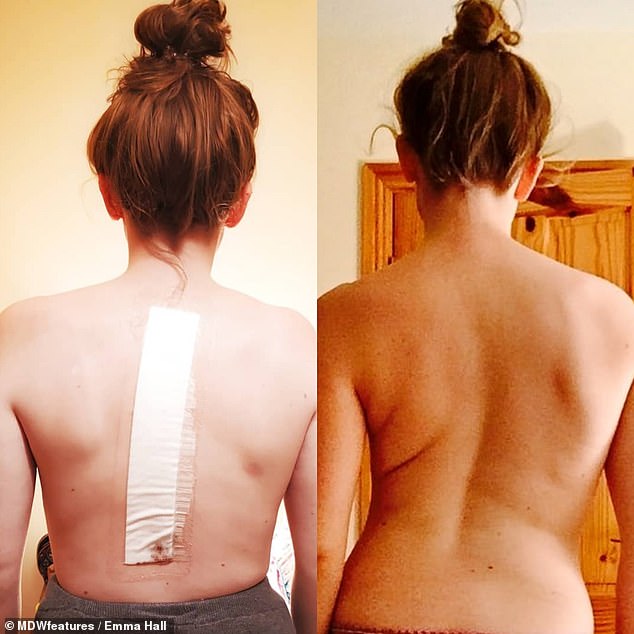 Emma Hall, 22, had surgery to correct her ‘wonky’ spine seven years after she was put on the waiting list age 15. Pictured, before, right, and after, left 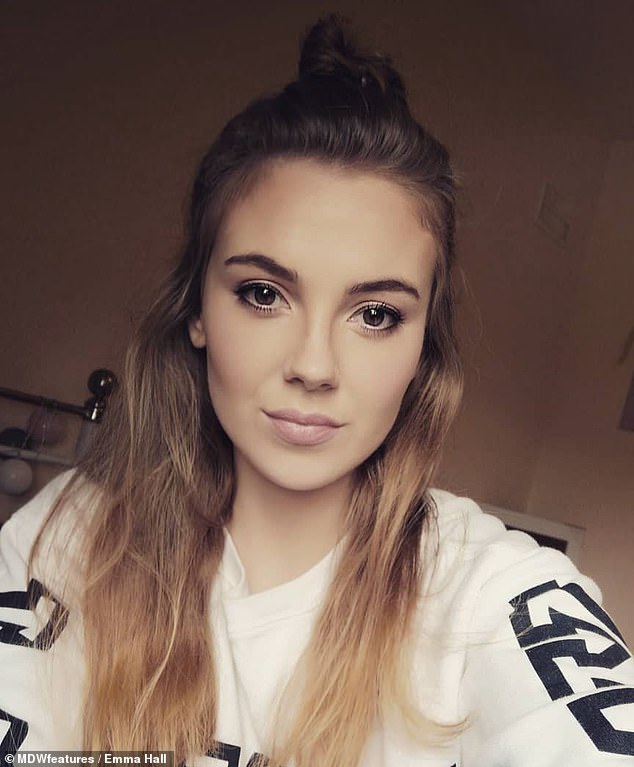 Miss Hall, of Sligo, Ireland, claimed doctors labelled her ‘superficial’ for wanting scoliosis surgery, despite it causing her agony for years

Growing up, Miss Hall often felt growing pains in her legs which left her screaming in agony, as well as a numbing ache in her back.

Certain school seats were uncomfortable for Miss Hall, as the rigid plastic dug into her curved spine. But she never raised it as an issue.

It wasn’t until Miss Hall’s mother saw how curved her spine was that she took her to get a diagnosis.

Miss Hall said: ‘When I was 13, I was trying on a new bra but as the straps needed adjusting I asked my mum to come in and help me.

‘Mum began nagging that I wasn’t standing straight, and I had bad posture. She thought I was just being lazy and not holding myself correctly.

‘My mum placed her hand on my shoulders from behind me to try and position me correctly. I remember sensing the atmosphere in the room change immediately.

Miss Hall was told she had a 15-degree curve in her spine when she was 13. This reached 60 degrees by the time she had surgery. Left, before, right, after straightening 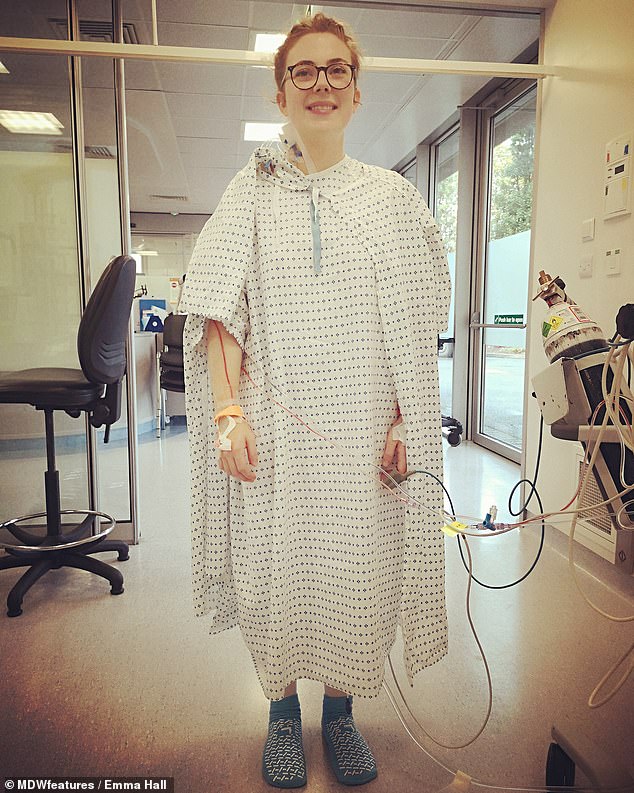 When X-Rays showed Miss Hall had a curve in her spine at the age of 13, she was in a ‘grey area’ – her spine was not curved enough for surgery, but too curved for a back brace to have effect

‘She had me bend forward, and slowly I felt her finger trace a strange pattern down my back.’

She added: ‘It seemed odd to me that it wasn’t the straight line you would expect, so we knew there was something wrong with my spine.

‘We went to the GP to get a referral and during a trip to Dublin I was diagnosed with scoliosis. From that moment my whole life changed.’

X-rays revealed a 45-degree curve in Miss Hall’s spine. Doctor’s felt the curve wasn’t bad enough for surgery, which put her in the ‘grey’ area.

But the curve was too developed for a back brace to have any effect.

Miss Hall said: ‘As my consultant looked at the X-ray that had been taken 20 minutes prior, my mum and I sat in silence. I couldn’t believe that it was me on the screen.

‘He said I had a 45-degree curve and that I was in the “grey” area for surgery but had finished growing so a brace would be useless at such a late stage.

‘There was nothing more to say so I took a quick picture to show the family and went back to the car.

‘Then the emotions hit, and I burst into tears. Having just moved school and trying to fit in as everyone already knew each other, I felt like the loneliest person in the world.’ 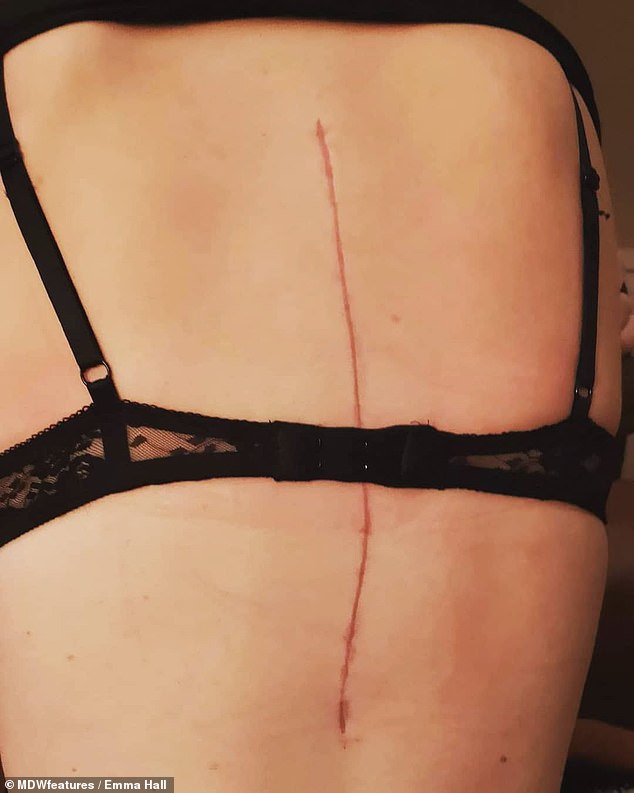 Miss Hall wanted surgery ‘to try and have a more normal life, reduce the pain, prevent the risk of the curve progressing,’ but was told she appeared ‘superficial’ 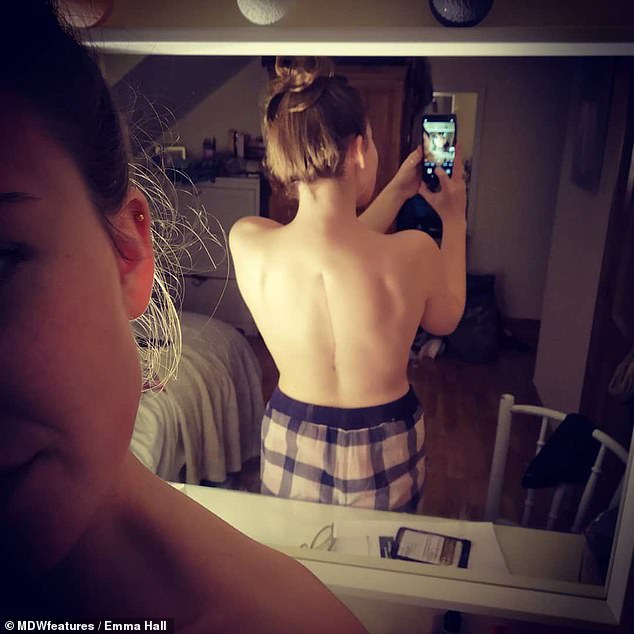 Miss Hall, who now has a straight back, said her condition left her self-conscious, especially as she wasn’t able to wear what she wanted, and she even received nasty comments

She spent hours researching her condition, which was beginning to cause her constant back ache.

But she put her feelings of insecurity aside for around two years while she finished her school exams.

Miss Hall said: ‘I finished my exams, but I noticed new pains and discomfort from sitting for long periods of time.

‘I went to my parents to explain that I knew the curve had worsened, even though the consultant said it shouldn’t as I had finished growing.

‘Sure enough, new X-rays showed a progression of five or six degrees. I was now at the level where surgery was recommended.’

She went to university, in which time, while waiting desperately for surgery, she saw various consultants.

Miss Hall claims that one doctor told her that she was only requesting surgery for ‘superficial reasons’, refuting the pain she suffered for years.

She said: ‘During my last year at university, I saw one doctor who told me that my curve was now 55 degrees and he said, “if it was my daughter I would be telling her not to get it as it’s only for superficial reasons”.

‘He wasn’t listening to me at all, I told him that I was now experiencing a lot of pain which was affecting my everyday life.

‘The pain would cause me to have extreme headaches which caused me to miss lectures and needing to take strong pain relief.

‘This grown man was making me feel so neglected and labelling me as a superficial person.

‘I wanted the surgery to try and have a more normal life, reduce the pain, prevent the risk of the curve progressing and I wanted to become a vet which I couldn’t do with a wonky back, could I?’ 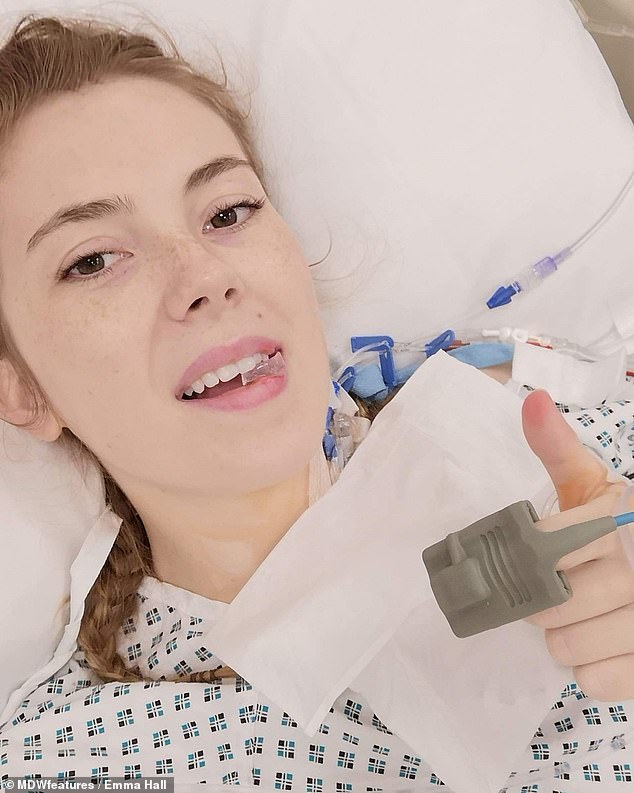 Miss Hall, pictured before her surgery, said the pain was affecting her every day life, and she was missing lectures due to headaches 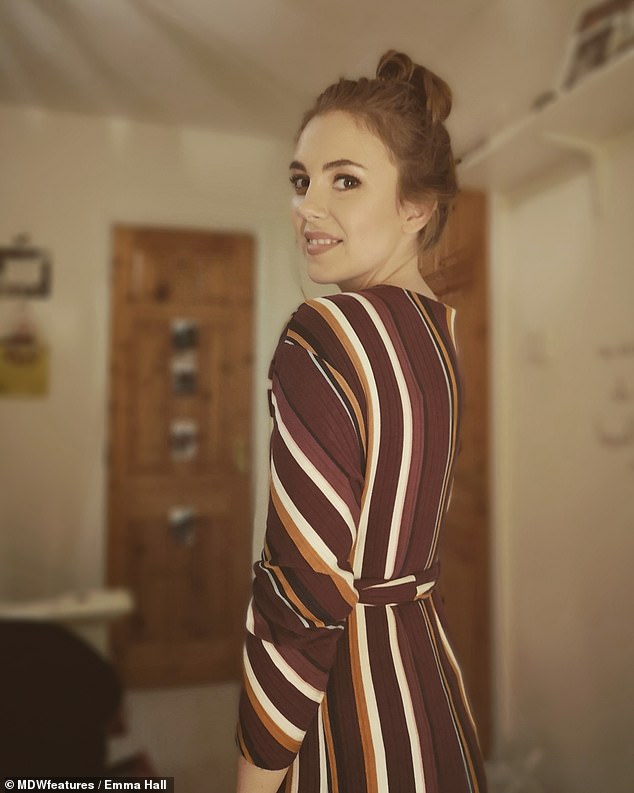 Miss Hall, now with a straight back, must develop her weak back muscles after surgery

Scoliosis is the abnormal curvature of the spine in an S-shape.

Signs include a visible curve in the spine, one shoulder or hip being more prominent than the other, clothes not hanging properly and back pain.

Pain usually only affects adults with the condition.

In most cases, the cause of the scoliosis is not known but it can be caused by cerebral palsy and muscular dystrophy.

In the UK, scoliosis affects three to four children could of every 1,000.

It is also thought that as many as 70 per cent of over 65s have some degree of scoliosis.

It is more common in women than in men.

Most children with the condition do not require treatment as it is mild and corrects itself as the child grows.

However, in severe cases the child may need to wear a back brace until they stop growing.

Occasionally, a child needs surgery to straighten their spine.

In adults, it is usually too late to treat the condition with a back brace or surgery so treatment revolves around reducing pain.

As Miss Hall continued her life, her self-confidence began to plummet.

She could no longer wear dresses with zippers or patterns on the back, and sitting at a desk was unrealistic.

‘My confidence took a hit when I couldn’t wear dresses with zips up the back. Also, some patterns sat funny. I felt like everyone saw it, so I became more and more withdrawn from being social.

‘One boy even made a comment about why my back was all bumpy, while pointing at it.’

Eventually, in September 2018, Miss Hall was able to have surgery, by which point her spine had a 60-degree curve.

In hindsight, Miss Hall is now thankful for waiting for the surgery because she was able to complete her degree beforehand, while playing on the hockey team, and then take time out to recover after the surgery.

‘Although I am annoyed it took so long, in the end it couldn’t have happened at a better time. I graduated in the summer of 2018 and had no work lined up so now I can take the year out and recover.

‘I am older than most who undergo the corrective surgery, so I feel maturity and understanding the procedure played a huge part.