Injecting patients with supercharged white blood cells could be the key to fighting sepsis, according to researchers.

Scientists managed to ‘significantly’ reduce bacteria in the blood of mice within a day of giving them the experimental treatment.

The bacteria was destroyed with a second dose of the donated white blood cells, which had been edited to have extra infection-fighting abilities.

Sepsis is a a common complication for hospital patients and is extremely deadly – late-stage sepsis may kill up to 60 per cent of patients who get it.

This therapy is aimed at late-stage sepsis, for which the researchers said there hasn’t been a new effective treatment for several years. 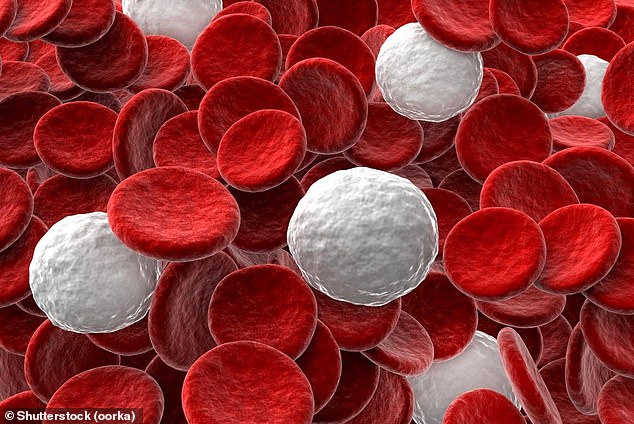 People with sepsis do not have enough white blood cells and the ones they do have don’t work properly, which means their immune system is unable to fight off infection and also damages the body’s own organs (stock image)

‘Sepsis remains the leading cause of death in hospitals,’ said Professor Yizhou Dong, from Ohio State University, who led the study.

‘There hasn’t been an effective treatment for late-stage sepsis for a long time. We’re thinking this cell therapy can help patients who get to the late stage of sepsis.

Sepsis occurs when the body reacts to an infection by attacking its own organs and tissues.

Some 44,000 people die from sepsis every year in the UK. Worldwide, someone dies from the condition every 3.5 seconds.

Sepsis has similar symptoms to flu, gastroenteritis and a chest infection.

Symptoms in children are:

Under fives may be vomiting repeatedly, not feeding or not urinating for 12 hours.

Anyone can develop sepsis but it is most common in people who have recently had surgery, have a urinary catheter or have stayed in hospital for a long time.

Other at-risk people include those with weak immune systems, chemotherapy patients, pregnant women, the elderly and the very young.

Treatment varies depending on the site of the infection but involves antibiotics, IV fluids and oxygen, if necessary.

‘In the clinic, we believe this could be used in combination with current intensive care treatment for sepsis patients.’

Sepsis is an illness in which the body overreacts to an infection and the immune system starts to destroy its own organs.

Although curable, it can be hard to spot because of its general flu-like symptoms and can also progress to a deadly stage in just a matter of hours.

In sepsis patients, the body does not have enough white blood cells and the ones they do have don’t work properly.

They transformed these into a specific type of cell – a macrophage, which essentially eats invading bacteria and viruses – to replace the ones missing in the bodies of the mice with sepsis.

The scientists also edited the genes in the cells to make them build up larger amounts of antibacterial substances called peptides inside them, essentially supercharging their ability to destroy bacteria.

In tests, the researchers gave each mouse four million of these engineered macrophages per treatment.

One treatment ‘significantly’ reduced the amount of infection-causing bacteria in the blood, while a second destroyed what was left in those which still had bacteria.

Scientists use mice in experiments because their body processes are so similar to humans.

The research was published in the journal Nature Nanotechnology.