Tailor, 51, watches her fingers ‘erupt’ in ulcers and her nails FALL OFF because of circulation problems caused by Raynaud’s

A tailor’s fingers ‘erupted’ in ulcers and her fingernails fell off because of a painful condition which makes her digits extremely sensitive to the cold.

Alex Busby, from Warwickshire, suffers from Raynaud’s, a common phenomenon which can cause serious damage if left untreated.

Her symptoms began with what she thought was poor circulation, with parts of her body turning purple when cold, but ended up with painful ulcers on her hands.

She now has clubbed fingers, meaning she has had to relearn how to sew, and her hands are sometimes so painful they wake her up at night.

Ms Busby is sharing her story to warn people to tell their doctor if they think they might have the condition before it’s too late. 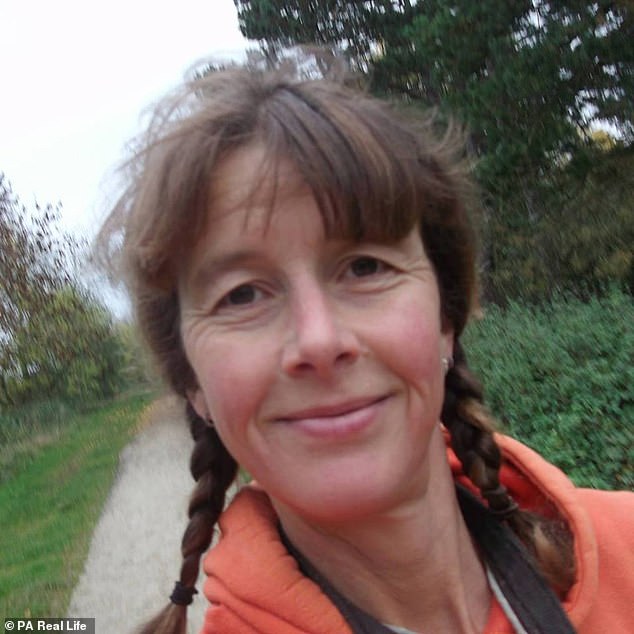 Alex Busby, from Warwickshire, suffers from Raynaud’s, a common phenomenon which can cause serious damage if left untreated 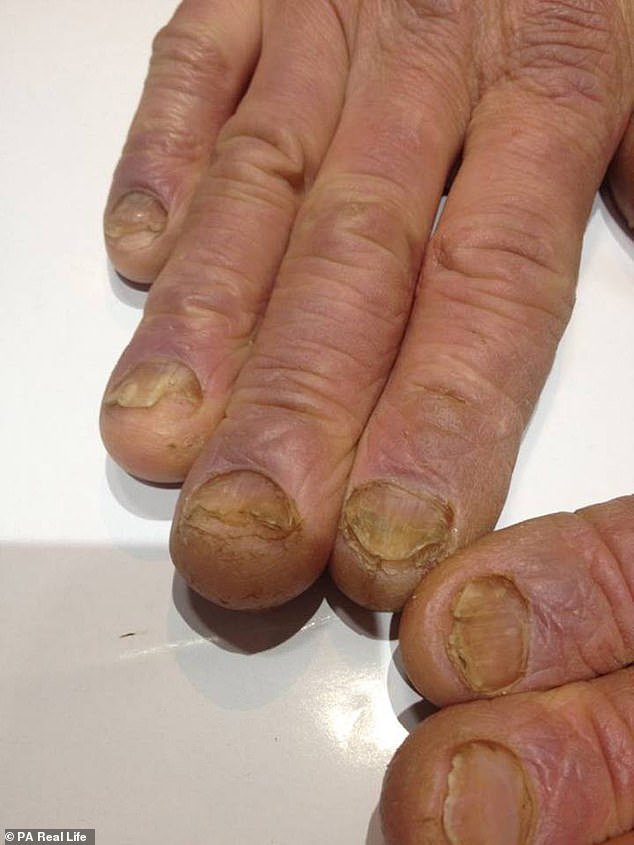 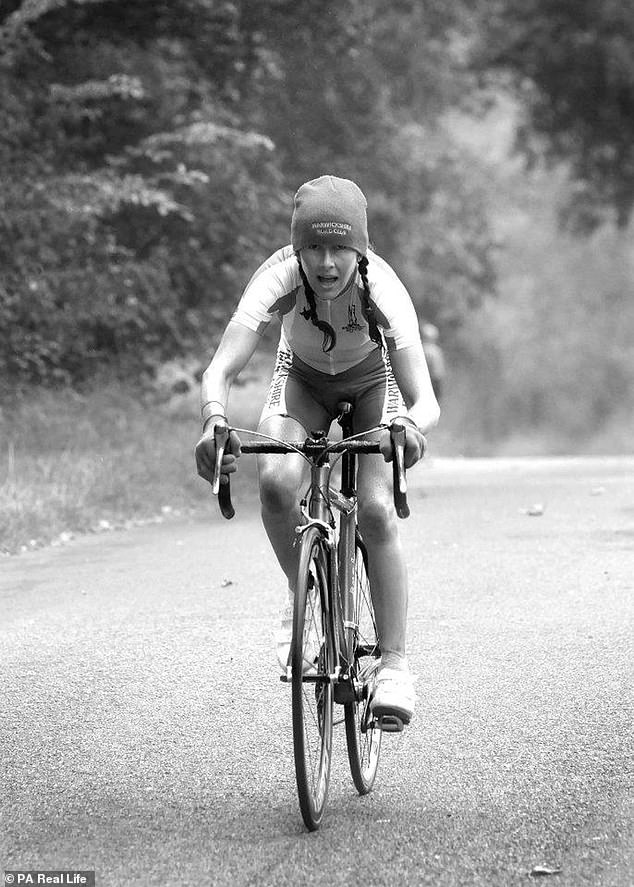 Ms Busby believes her time as a competitive cyclist made her condition worse, as she was training in all weathers and letting her fingers get cold

Things came to a head for Ms Busby in December 2018, when painful ulcers sprang up all over her fingers.

Soon after, the ulcers ‘erupted’ and she raced to the doctors, where she was diagnosed with Raynaud’s.

The condition, which is thought to affect up to one in five people, makes blood vessels in the hands and feet incredibly sensitive to cold.

In severe cases of Raynaud’s, the blood supply to an affected body part can become severely diminished, and the skin tissue can  die.

Growing up, Ms Busby recalls having poor circulation in her hands and feet, but never worried about what was causing it.

She even became an amateur competitive cyclist, training for hours on end in all weathers – something which, looking back, she fears was unknowingly making her symptoms worse. 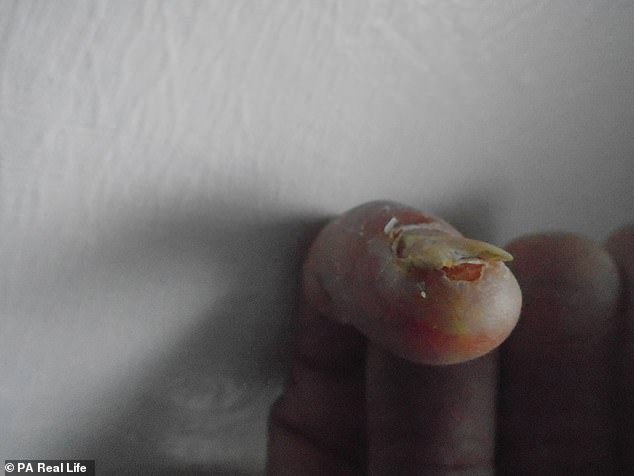 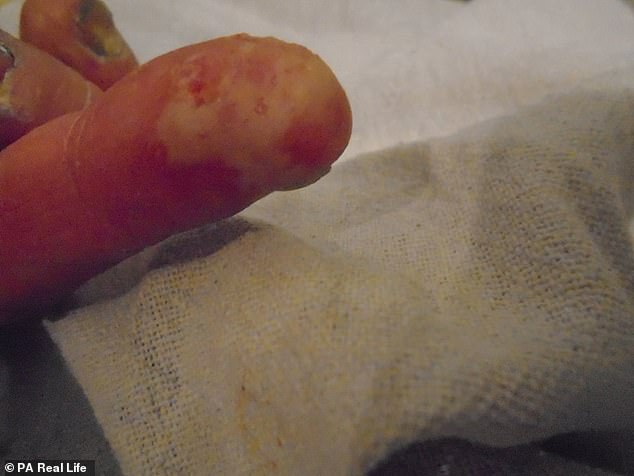 The ulcers on Ms Busby’s fingers burst, leaving her to rush to the doctors

‘My knees would be literally purple – but I had no idea what was causing it,’ she said.

Over the years, Ms Busby consulted doctors on a few occasions, but never had any thorough investigations.

Until December 2018 when her condition rapidly declined.

Ms Busby recalled: ‘My fingers became covered in ulcers and eventually just couldn’t cope. It was like a load of boils bursting. It was all a bit of a mess.’

At the doctors, Ms Busby had her fingers individually bandaged up – which left her fretting that her career as a tailor would be affected.

She said: ‘I explained to the medical staff that I absolutely needed to be able to work, and they were brilliant about it. I can’t fault the doctors, they were phenomenal.’

After two weeks, Ms Busby’s bandages were removed, but she has been left with no fingernails and her digits have clubbed, which is when they change shape and curve abnormally.

Following her official Raynaud’s diagnosis, she has been placed on nifedipine, a medicine often used to treat high blood pressure that encourages the blood vessels to widen.

Now, Ms Busby must take extreme precautions to ensure her fingers and toes are not exposed to the cold, which could trigger a flare up.

She said: ‘I have a hairdryer with me at work, which I blast on my fingers to warm them when they seize up. I also take handwarmers with me everywhere and have bought some Army issue mittens, which I have on strings.

‘Even through that, though, I can still be affected. I’ll know a flare up is coming as my fingers feel sore, then they can change colour to red, white or blue.

‘Sometimes the pain is so bad it wakes me up from my sleep.’

The loss of her nails and clubbing of her fingers has also meant that Ms Busby has had to adjust to relearning everyday tasks, like texting and sewing which, as a tailor, was previously second nature. 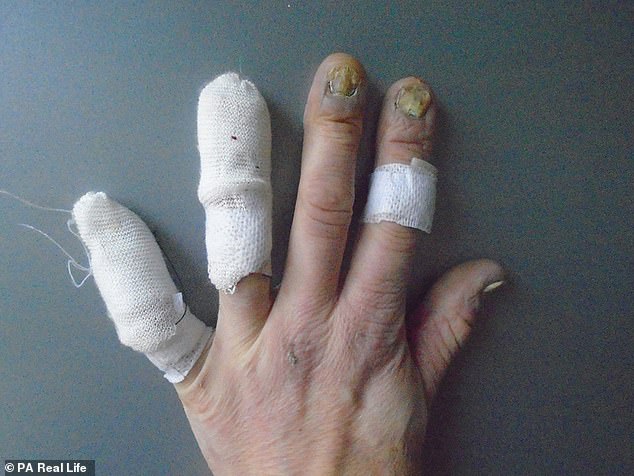 Ms Busby wore bandages for two weeks, before they were removed and her fingers were clubbed and fingernails had fallen off. Pictured, while in bandages 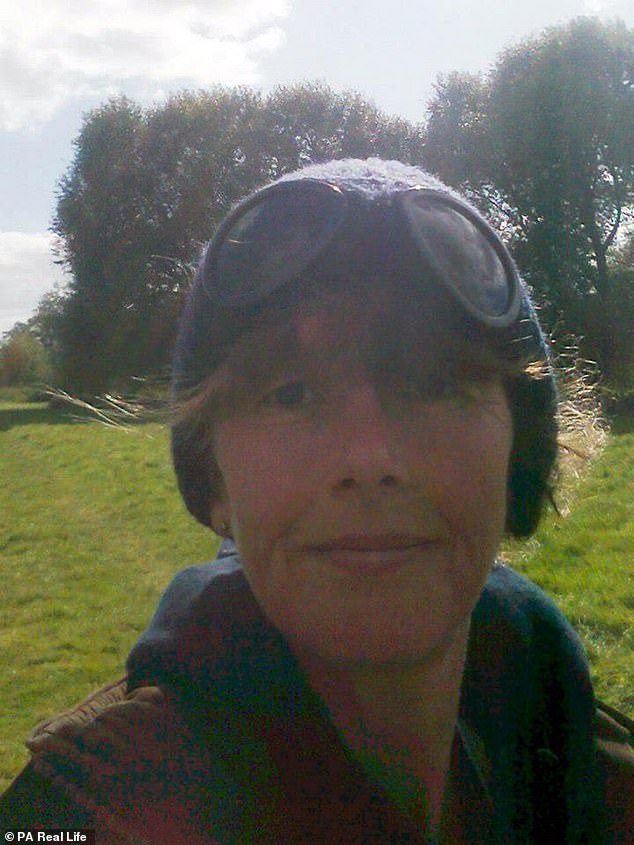 Ms Busby has had to adapt to her fingers becoming clubbed, which has been difficult considering she is a tailor. She wears gloves and hides them from strangers

She said: ‘People don’t realise just how much they rely on their nails. It can be difficult at work, when I’m using fiddly needles.

‘Texting is another thing that’s become difficult. My clubbed fingers make it really hard to type, so I ask people to call, but as we’re such a digital society now, they don’t always do so.’

The emotional fall-out has also been difficult, as Ms Busby worries that strangers will stare at her hands, or make nasty comments.

She said: ‘I’m learning to adapt and battle on, but in this age of beauty and social media pressure, I do worry what people will say.’

At work, she tries to hide them away, sometimes wearing gloves to avoid difficult conversations.

But Ms Busby fears they will hold her back from finding other employment, should her symptoms worsen to the point where she can no longer be a tailor.

‘I’ve thought about what else I could do, but I worry that nobody will take me on with the way my hands look,’ she said. ‘The judgement from other people is one of the most upsetting things about this.

‘People seem to know what they can and can’t say with lots of conditions, but not this one. I do get lots of odd looks at my hands, now they are contorted with no nails.’

Now, during February’s Raynaud’s Awareness Month, Ms Busby hopes that, by speaking out, she can raise awareness of the symptoms to watch out for – and encourage people to be a little kinder to sufferers.

She is also supporting charity Scleroderma and Raynaud’s UK, who are encouraging those with similar symptoms to take an online test.

She said: ‘If things do get bad, see the doctor before it’s too late. Don’t worry about being a nuisance – it’s about nipping it in the bud and getting it before it gets you.’

WHAT IS RAYNAUD’S PHENOMENON?

Raynaud’s phenomenon is a common condition, affecting up to 20 per cent of the adult population worldwide. There may be as many as 10million people with the condition in the UK.

Raynaud’s is usually triggered by cold temperatures, anxiety or stress. The condition occurs because your blood vessels go into a temporary spasm, which blocks the flow of blood.

This causes the affected area – normally fingers and toes – to change colour to white, then blue and then red, as the bloodflow returns. You may also experience numbness, pain, and pins and needles.

What are the different types?

There are two types of Raynaud’s: primary – when the condition develops by itself (this is the most common type) and secondary – when it’s caused by another health condition.

The majority of cases of secondary Raynaud’s are associated with autoimmune conditions, which cause the immune system to attack healthy tissue, such as rheumatoid arthritis and lupus.

Secondary Raynaud’s can severely restrict the blood supply, so it carries a higher risk of complications, such as ulcers, scarring and even tissue death (gangrene) in the most serious cases.

Around one in 10 people with primary Raynaud’s go on to develop an autoimmune condition.

How is it treated?

You can usually treat Raynaud’s phenomenon yourself, although medication is sometimes necessary.

You can keep your home warm, wear warm clothes during cold weather – especially on your hands and feet, exercise regularly to improve circulation, try breathing exercises or yoga to help you relax and eat a healthy, balanced diet.

It’s also advised to not smoke or consume caffeine.