As the saying goes, when all you have is a hammer, everything looks like a nail; and some medicines can work that way, spreading throughout the body and “treating” every cell, without discrimination. This is a real problem when it comes to cancer treatment. But now, researchers from Japan have reported an anti-cancer treatment that zeroes in on tumor cells with laser precision.

Recent developments, such as targeted α-therapies as a type of theranostics, are trying to solve this problem. Theranostics is a one-two punch against cancer that involves finding cancer cells anywhere in the body and delivering targeted radiation to kill those cells with radiopharmaceuticals (drugs containing radioactive isotopes).

In a study published in the European Journal of Nuclear Medicine and Molecular Imaging, researchers from Osaka University and Dusseldorf University have revealed that a new radiopharmaceutical treatment targeting prostate-specific membrane antigen (PSMA)—a protein commonly expressed on the surface of prostate cancer cells—can effectively shrink prostate tumors in mice.

Not only is prostate cancer one of the most common cancers, with increasing incidence worldwide, but it is also the most prevalent cancer among men in Japan. Recurrence after hormonal treatment in the form of multiple metastases that are difficult to treat using conventional drug or radiotherapy is associated with a poor prognosis and short life expectancy. 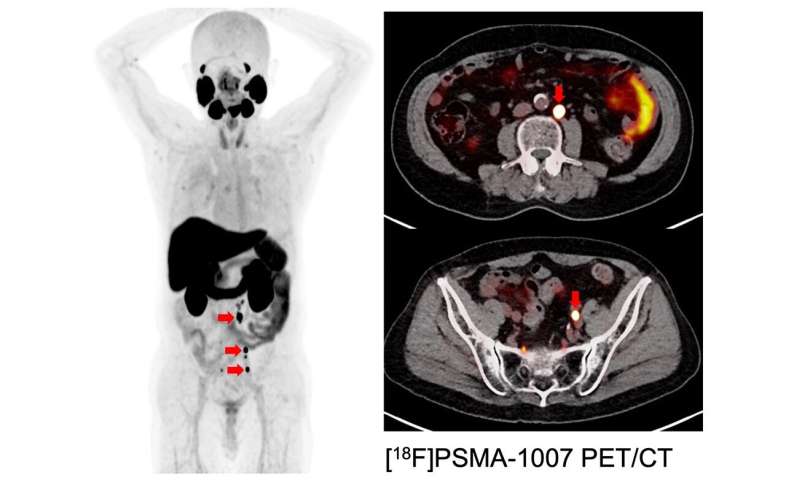 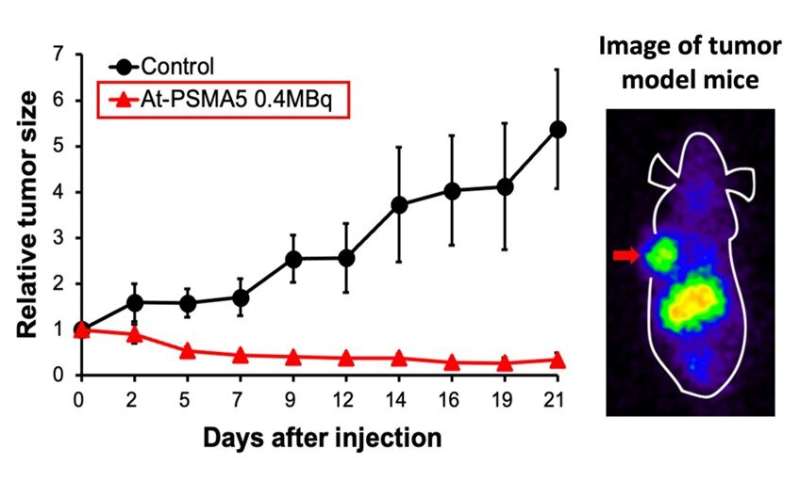 “Targeted β-therapies that specifically target these metastases and deliver radiation directly to them, such as treatments targeting [Lu-177]PSMA, have been shown to significantly prolong overall survival compared to the standard treatment alone,” explains Tadashi Watabe, first author of the study. “Some patients are refractory to β-therapy and α-therapy using Actinium (Ac-225) is reported to be very effective. However, the production of Ac-225 is limited by the fact that they have to be produced in special accelerator facilities using rare and costly materials.”

To develop a better option, the researchers investigated the effectiveness of another radioisotope called astatine ([211At]) which is easy to manufacture with an accelerator using abundant materials. They implanted human prostate cancer cells in mice and treated them with a compound called [211At]PSMA5. “The results were very impressive,” states collaborative researcher Frederik L.Giesel. “[211At]PSMA5 accumulated at high levels in the tumor tissue and rapidly reduced tumor size.”

Importantly, [211At]PSMA5 did not appear to have significant side effects in any major organs. Given its effectiveness in shrinking prostate tumors in mice, the researchers plan to launch an investigator-initiated clinical trial of [211At]PSMA5 treatment for refractory prostate cancer in 2 years with the support of a translational research grant from the Japan Agency for Medical Research and Development.