First sugar, now red meat? Taxing beef, lamb and pork ‘could prevent about 220,000 deaths and save more than £30.7billion in healthcare costs around the world each year’

A ‘meat tax’ on bacon, burgers and beef could save 220,000 lives and £30.7billion around the world within two years, experts say.

In the UK, this could prevent 6,000 deaths a year and save more than £700million which would otherwise have been spent on healthcare.

But it could hike the price of red meat like mince and steak by 14 per cent, and the cost of processed meat like bacon and burgers by 79 per cent.

They acknowledged ‘no-one wants governments to tell people what they can eat’ but cutting down red meat would be better for human health and for the earth. 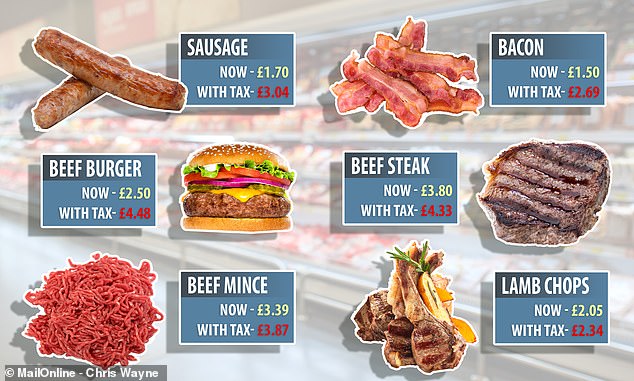 In the UK, an optimal meat tax could increase the cost of red meat by 14 per cent and processed meat by 79 per cent, researchers say, which would put prices up on supermarket shelves (pictured: examples of how supermarket prices could change, based on prices on Tesco Direct)

‘This is having significant impacts not only on personal health, but also on healthcare systems, which are taxpayer-funded in many countries, and on the economy, which is losing its labour force due to ill health and care for family members who fall ill.

‘I hope governments will consider introducing a health levy on red and processed meat to make healthy and sustainable decision-making easier for consumers.

‘A health levy on red and processed meat would not limit choices, but send a powerful signal to consumers and take pressure off our healthcare systems.’

The size of the meat tax would vary in different countries around the world, depending on how much meat they eat and how much it costs to buy.

The study estimated a tax could reduce the intake of processed meat like bacon and sausages by around two portions a week in high-income countries.

Filippo Bianchi, an expert researcher at Oxford University has suggested five ways society can discourage people from eating as much red meat, which is linked to cancer, heart disease and type 2 diabetes.

He writes for The Conversation:

Another study found that adding smaller sausages to supermarket shelves was linked with a 13% reduction in meat purchases. So, simply making smaller meat portions available in supermarkets could also help to cut down meat consumption.

How foods are displayed on restaurant menus also makes a difference. Research has shown that creating an exclusive vegetarian section at the end of a restaurant menu actually reduces the likelihood of people trying plant-based foods.

Instead, displaying the meat options on a separate restaurant board and only keeping plant-based options on the default paper menu made people four times more likely to go with a meat-free option, according to a study conducted in a simulated canteen.

3. Position meat out of sight

Research showed that making veggie options more visible than meat at the counter of a university canteen was linked with a 6 per cent increase in the selection of meat-free dishes.

And when it comes to a buffet setup, placing the meat options at the end of the aisle is probably the way to go. One small study found that this buffet layout could cut people’s meat intakes by up to 20 per cent. But given the small sample size, more research is needed to corroborate this finding.

Reminding people of where meat actually comes from can also make quite a difference to how much meat people end up eating.

Research shows, for example, that presenting the image of a pork roast with the pig’s head still attached increases people’s demand for a plant-based alternative.

Of course, making vegetarian dishes delicious sounding enough to compete with meat ones seems like a good idea.

And a recent study found that increasing the look and appeal of meat-free options on the menu of a simulated university cafeteria doubled the amount of people who selected meat-free meals over traditional meat dishes.

So while it’s still early days and much more research needs to be done to understand how to encourage people to eat less meat, ultimately, making meat-free options more appealing will be key to reducing long-term meat consumption. 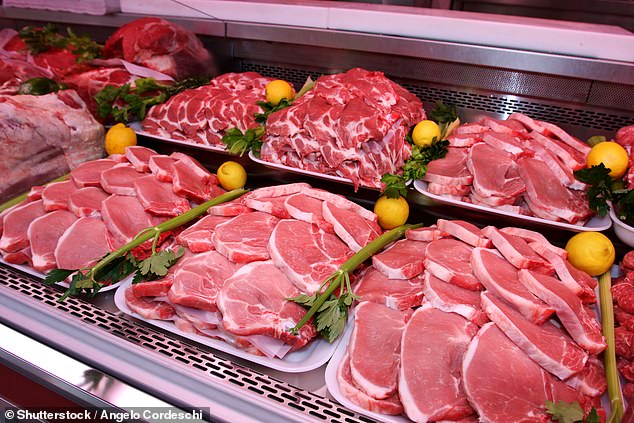 Scientific evidence links eating red meat to cancer, heart disease and stroke, and restricting how much people eat by making it more expensive could cut down the number of people who die of related diseases, experts say

In the UK, the optimal tax level could increase the cost of red meat by 14 per cent and processed meat by 79 per cent, Dr Springmann said.

But the UK comes off fairly lightly – ideal processed meat tax in the US could be 163 per cent, whereas it could be 185 per cent in Sweden.

The UK figures could see the price of an eight-pack of Tesco British Pork Sausages rise from £1.70 to £3.04, for example.

In the US the tax would need to be higher, rising the cost of meat by 34 per cent and processed meat by 163 per cent.

HOW THE MEAT TAX COULD CHANGE SUPERMARKET PRICES

Based on the possible tax rates of 14 per cent for unprocessed red meat and 79 per cent for processed meat, these are some examples of how Tesco prices could change:

Prices are all from Tesco Direct

An effective tax in Sweden increased the price of processed meat by a whopping 185 per cent and that of red meat by 27 per cent.

But in China optimal tax levels were much lower – just seven per cent on red meat and 43 per cent on processed meat, the study found.

Taxing meat in Germany at an effective level led to red meat being 28 per cent more expensive and the price of processed meat rising by 166 per cent.

The same policy in Denmark resulted in red meat being taxed at 29 per cent and processed meat at 119 per cent.

The potential global benefits of a meat tax include a 16 per cent reduction in processed meat consumption, and the prevention of 222,000 deaths from cancer, heart disease, stroke and type 2 diabetes.

In addition, an estimated 3,800 deaths related to obesity would be prevented, the study found.

For the UK alone, an effective meat tax that offset healthcare costs would prevent 5,920 deaths per year. That would amount to a reduction of 15.6 per cent in the number of deaths attributed to eating meat.

Louise Meincke, from the World Cancer Research Fund, said: ‘Governments need to implement more evidence-informed policies to help make our daily environments healthier so that it is easier for people to make these healthy choices.

‘This research, looking at the potential effects of a meat tax, shows it could help reduce the level of meat consumption, similar to how a sugar-sweetened beverage tax works, as well as offset costs to the healthcare system and improve environmental sustainability.’

A higher tax on processed meat would price consumers out of eating so much and move them towards unprocessed meat, believed to be healthier, researchers said.

The World Health Organisation has classified beef, lamb and pork as carcinogenic – meaning they cause cancer – when eaten in processed form.

And the meats are still ‘probably cancer-causing’ when they’re consumed unprocessed.

The research was published in the journal Public Library of Science ONE.

WHAT IS THE SUGAR TAX?

What is the sugar tax?

Since April 6 2018, soft drinks companies have been required to pay a levy on drinks with added sugar.

Why are the Government introducing the tax?

It is hoped the tax will encourage drinks companies to cut down on the amount of sugar in drinks, and consumers to choose lower sugar alternatives.

How much is the tax?

Prices of some popular drinks have risen and the recipes of others have changed to include less sugar as a result of the new law.

Will it apply to all drinks?

The new levy is not paid on milk-based drinks and fruit juices.