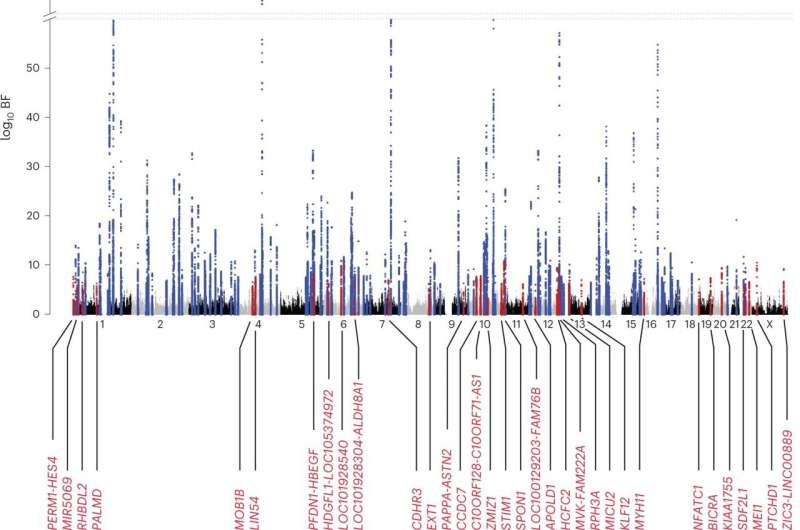 In the largest genetic study of heart arrhythmia to date, researchers led by Kazuo Miyazawa and Kaoru Ito at the RIKEN Center for Integrative Medical Sciences (IMS) in Japan report the discovery of several genes and individual genetic variations that are associated with atrial fibrillation. Data from over a million people were analyzed, and polygenic risk scores based on the genetic data were calculated. The scores predicted atrial fibrillation, and even stroke and mortality, in at-risk individuals. The study was published January 18 in the journal Nature Genetics.

Atrial fibrillation occurs when the heart beats rapidly and irregularly, causing blood to pool in the atria. This increases the risk of blood clots forming in the heart and then traveling to the brain where they can block blood flow and cause a stroke. In addition to other conditions like high blood pressure and diabetes, atrial fibrillation is associated with some genetic factors, but exactly how remains a mystery.

The researchers examined the genomes of more than 150,000 Japanese individuals and found five locations within our chromosomes—called genetic loci—that had never before been associated with atrial fibrillation. Among them, two include genetic variations unique to East Asian populations. A subsequent cross-ancestry meta-analysis of over 1.2 million people—the same Japanese population along with those from two large European studies—overall yielded 150 critical genetic loci, including 35 that were new. Further analysis found more than 130 genes associated with these loci. The likelihood that variations in one or several of these genes leads to atrial fibrillation is therefore high.

However, an association is not proof of causation. To test that overactive ERRg might be a direct cause of atrial fibrillation, the researchers grew human heart-muscle cells in the lab and facilitated ERRg activity. They found reduced expression of several important genes related to heart function. In addition, the heart-muscle cells exhibited irregular beating and prolonged contraction.

“Until now, which genes and how their transcriptional regulation is involved in the pathophysiology of atrial fibrillation was not very clear,” says Kazuo Miyazawa, first author of the study. “In this study, we discovered a key mechanism by integrating genomic data with epigenomic and transcriptomic data.”

Polygenic risk score is a statistical tool used to predict a person’s genetic susceptibly to diseases. However, when these scores are derived from genetic data from one population, they struggle to predict the risk in another population. By adding the new Japanese data to those from the European studies, the RIKEN IMS team was able to make better predictions. They found that the higher the score, the younger people were when they developed atrial fibrillation. Additionally, the score was significantly associated with stroke, even in people who had not been diagnosed with atrial fibrillation, and could predict the occurrence of death due to stroke.

“By applying our model to a person’s genome, we can find clinically undetectable heart arrhythmias or other related conditions,” explains Miyazawa. “This is critical as finding those at risk before they have a stroke is the goal for any risk-prediction analysis.”

Simply being able to find people at risk for atrial fibrillation is only the first step. The new study also leads to ideas for treatment. As Miyazawa explains, “As we found that ERRg is likely critically involved in the pathogenesis of atrial fibrillation, it thus represents a potential target for pharmaceutical intervention for those identified as at-risk.”