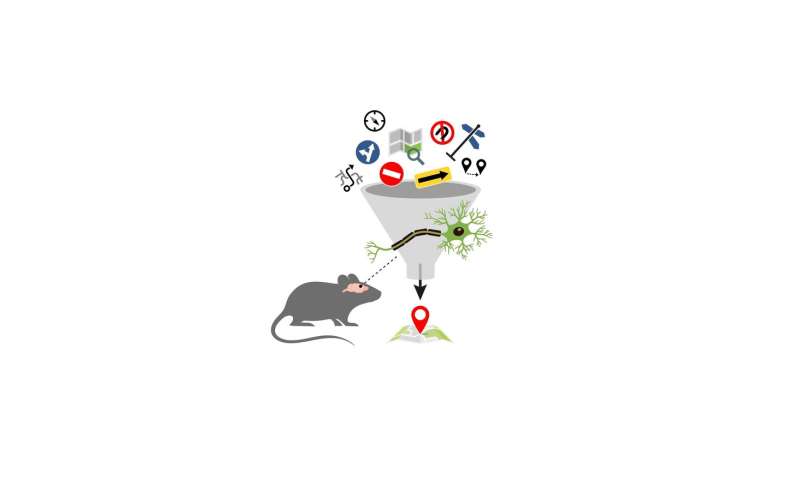 How do you keep orientation in a complex environment, like the city of Vienna? You can thank your brain’s ‘global positioning system,’ the hippocampus, for this sense of orientation. To further understand its functions, scientists at the Institute of Science and Technology Austria (IST Austria) analyzed single neurons of this GPS in mice. They discovered that so-called granule cells filter and sharpen spatial information. The researchers recently published their findings in Neuron.

The hippocampus is a region within the brain that contains many neurons that help us to navigate in space. This leads to the nickname of this area: the GPS of the brain. The higher areas of the cortex send information packages to the hippocampus to generate location signals. However, not all packages contain relevant information. Therefore, the hippocampus needs to have a bouncer in place to select incoming signals. Such a gatekeeper could be the granule cell, a type of neuron situated at the entrance of the hippocampal circuit.

IST Austria Professor Peter Jonas, Xiaomin Zhang, and Alois Schlögl started to examine neuronal signals in granule cells. However, the main problem was cell identification. In the past, experts could not guarantee that they correctly identified the cells. “Since this region is densely packed with various types of neurons, it is technically challenging to identify granule cells, the cells we were interested in,” says Xiaomin Zhang, the first author on the paper. This makes it very difficult to distinguish between the activity of granule cells from that of other types of neurons located in the same region. Furthermore, granule cells typically show very sparse activity despite a vast amount of them. Thus, other cell types with higher activity levels could dominate the picture.

Gatekeepers of the hippocampus

To record the incoming and outgoing signals of the granule cells, the scientists developed a novel recording technique and machine learning algorithm to decode these signals. To unequivocally identify the neurons, cells were filled with a tracer during recording. In total, they recorded from almost a hundred granule cells, generating a large data set that describes the activity of this important type of cell. They found that a majority of neurons receive spatial information. However, only a minority of neurons relays this spatial information to the rest of the hippocampus. Thus, granule cells indeed appear to operate as gatekeepers.

However, granule cells not only select information but also appear to be involved in information processing. The team found that the input of the granule cells is broad, but the output is much more selective. Upstream cortical areas neurons are often grid cells that generate activity in multiple locations of the environment. In contrast, downstream hippocampal regions neurons are typically place cells, which fire only at a single location. The new study suggests that granule cells participate in this conversion. “In simplified terms, we can think of the granule cell as a unit that translates one neuronal language into another,” Jonas explains.

Saving computation power for the future

The majority of granule cells receive spatial information, but only 5% generate spatial output. Xiaomin Zhang explains: “Especially neurons with a more developed structure were active, whereas neurons with less mature structure remained silent.” What could be the functional significance of such a unique design, in which a huge fraction of cells is not directly used for information processing? The scientists suggested that the hippocampus reserves most granule cells for future conversion and storage processes.