You know the scene. You’re kicking back with your partner, glass of wine in hand, enjoying some quiet time at the end of the day, while your children slumber sweetly in bed.

You’re serene in the knowledge that your children are getting the sleep their growing brains and bodies need and they’ll wake up well rested and ready for the day ahead.

Or perhaps not. Instead you might be one of the exhausted souls suffering the grinding misery of a child who doesn’t sleep. 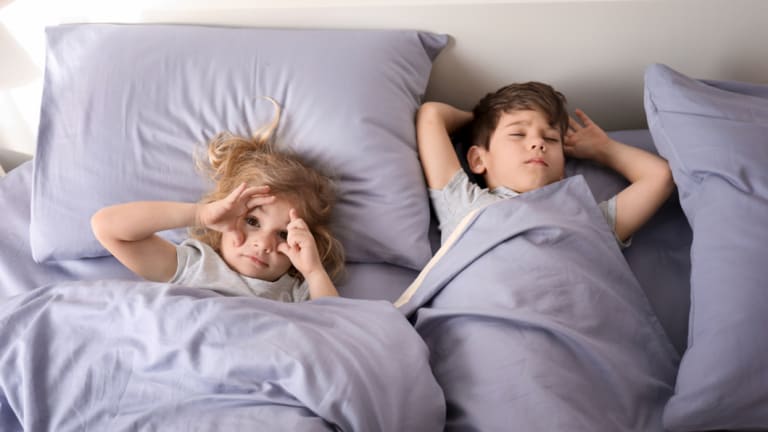 Sleep is important to a child’s health, but it’s not always easy to come by.Credit:Shutterstock

You’ll spend hours trying to settle them, only to have them wind up in your bed. They’ll wake up tired and irritable, and get through the day fuelled by manic energy and meltdowns.

Sleep is very important to a child’s health and development. A child’s sleep is also important for their parents’ health and relationships. It’s just not always easy to come by.

Professor Sarah Blunden, the head of paediatric sleep research at Central Queensland University and a clinical psychologist with a private practice focused on sleep, treats children from birth to 18.

Blunden says a child in primary school generally needs between 10 and 12 hours’ sleep at night, while a high school student needs between eight and 10 hours. An adult needs seven to nine hours a night. But you can’t just pick the low end of the range and assume that’s enough – an individual might well need sleep at the top end of the range, or they might need more than the guidelines.

As Professor Harriet Hiscock, a paediatrician at the Royal Children’s Hospital Melbourne, puts it: “If a child is happy and functioning well, they don’t need more sleep. If they’re grumpy, moody or upset there can be lots of causes, but they may need more sleep.”

The public health system supports parents of babies and toddlers with sleep issues – for example, you can do a Medicare-subsidised day visit or a residential stay at a centre such as Karitane or Tresillian. But once your child is 36 months old, support becomes harder to come by and generally more expensive.

Blunden says sleep is under pressure around the world. Studies published in Sleep Medicine in 2010 and 2013 suggest that Australian infants, toddlers and preschoolers get more sleep – though not necessarily enough – than their counterparts in a number of countries, especially throughout Asia.

Meanwhile, Australian adolescents, like teenagers around the world, are falling well short of what they need. So are adults for that matter.

Dr Maree Barnes, the former president of the Australasian Sleep Association, says Australia has a “huge problem” with lack of sleep and she is thrilled there is now a parliamentary inquiry into the issue. “Sleep is important because every single cell in your body does different things during the night than during the day,” she says. “It rests us for the day ahead so without sleep, or with poor or insufficient sleep, we’re more dangerous on the roads and more likely to make poor decisions at home.”

Blunden says chronic sleep loss can manifest in symptoms similar to other conditions, with studies as far back as 1980 suggesting some children who were diagnosed with ADHD, medicated and pulled out of mainstream school were merely sleep-deprived.

But it’s one thing to be convinced of the need for sleep, and another to know how to make it happen.

How to treat sleep issues

A parent might start by searching for information on Google. Reading up on “sleep hygiene” is the first port of call, Blunden says. This describes following a consistent routine conducive to sleep before bedtime. It helps to keep bedtime and waking time consistent each day, finish dinner early enough to give children a chance to digest and to calm them down before bed with consistent rituals such as a bath and a bedtime story. It’s best to dim the lights and avoid screens for at least half an hour before bedtime because the blue light can disrupt the body’s release of melatonin – the natural hormone that signals when it’s time to feel sleepy.

Blunden says there are three main reasons why someone might not be getting enough sleep. The first is physiological – such as snoring or sleep apnoea. The second is psychological – such as stress and anxiety, or having a circadian rhythm out of kilter. And the third is environmental – such as screens and consumption of coffee, alcohol, cigarettes and drugs.

But if you’ve tried all that, what next?

You could seek professional help. Blunden often works with teenagers using chronotherapy, where melatonin levels are manipulated with lights.

Dr Chris Seton, a paediatric and adolescent sleep physician at Westmead Children’s Hospital in Sydney and the Woolcock Institute of Medical Research at the University of Sydney, runs an online service called Sleep Shack as well as seeing children face-to-face. It has general information for parents, but also the option of accessing assessment and a treatment plan for a lower fee than a face-to-face consultation.

Then there’s medication. Most doctors and parents would be wary of traditional sedative sleeping pills for children, but melatonin is growing in popularity, and is touted as a “natural alternative”. Melatonin is the natural hormone that tells your body when to feel sleepy or awake, and a synthetic version is available in Australia as a prescription drug, though it’s readily available as an over-the-counter supplement in many countries overseas.

As Fairfax Media reported, use of melatonin for children is growing rapidly and many families are buying it from overseas where it's cheaper and easier to obtain. The safety profile in adults is well-settled, but the longest paediatric studies have been for about two years – though health professionals say it’s considered much safer than any other sleeping tablets.

Charmaine, a mother-of-three from Canberra, says her daughter Sarah became anxious when she started school and stopped sleeping well. It was routinely taking two to three hours a night to settle her, and usually a parent needed to lie down beside her.

Two years ago Charmaine took Sarah to see a sleep psychologist. “I was determined to try everything to get her into a good pattern,” Charmaine says. “We exhausted every possibility: perfect routine, warm milk, relaxation, massage, children’s yoga, downloading books about bunnies – you name it, we’ve done it. She was a golden girl at school but at home it was like having a newborn.”

Eventually the family, with the support of the psychologist and GP, turned to melatonin. “Now we have all the normal issues of her being a nine-year-old girl but sleep with the melatonin is much, much better,” Charmaine says. “It was an immediate effect, it was wonderful.”

Blunden says a prescription might be reasonable after a few months of trying behavioural strategies but her concern is that “increasingly melatonin is the first port of call”.

“Melatonin is great, it’s really successful, and it doesn’t have any side-effects as far as we know but it is a drug and we have to be aware of that in the growing brain,” Blunden says.

The “million-dollar question” is the balance between avoiding unnecessary drugs and the benefits to the child of getting more sleep.

Seton is also worried that melatonin is being overused, though it’s impossible to track prescriptions or people buying it from overseas. “It’s easy to give melatonin but hard to give the other treatments; we live in an instant gratification world and parents want an instant fix,” Seton says.

Blunden says a lot of children who use melatonin get anxious when it’s not available. She suggests it might be worth trying a placebo, if you can find a compounding pharmacist to make it.

Melatonin is used by a wide range of children, including those with no other diagnosis, but it’s particularly popular for children with autism spectrum disorder, ADHD, anxiety and depression.

Blunden says melatonin is measurable through testing blood, saliva and body temperature. Studies have shown that children with autism have melatonin dysfunction, which means that the rhythm of melatonin production is out of sync.

Autism is one end of a neurological spectrum that everyone sits on. That means people who do not meet the criteria for a diagnosis of autism can be closer to the border than others, and share some traits in common with those with autism. Does this also mean some so-called neurotypical people can be naturally lower in melatonin because they’re closer to the autism end of the spectrum? Seton says yes.

However, there’s no evidence of melatonin dysfunction for children with ADHD, depression or anxiety. Seton says the problem there is that these children, particularly those with hyperactive behaviour, are harder to get into a good routine and more resistant to behavioural strategies.

Blunden says “the drugs can help you be better rested so you can do the pyschological therapies that need brain space.”

The so-called sleeplessness epidemic is worse for teenagers because sleep is under pressure from other things in life, from socialising to screens to school.

“The problem is that education doesn’t fit in with that – you get more homework and study as you go through secondary school, and they do more of all the extracurricular stuff and more socialising.”

Blunden says one reason adolescents sleep worse is because they’re left to their own devices – and their devices – more than younger children.

Seton agrees. He advises his patients to avoid using screens for an hour before bedtime and not to sleep in the same room as their phone, and calls on parents to do more.

“It’s a catch-22 because if you’re a teenager and can’t get to sleep, the thing you’re most likely to do is reach for the phone and that’s the worst thing you can do because the blue light and the excitement of the process sends signal to brain to wake up,” Seton says.

"Teenagers are good at doing most adult things but hopeless at managing screens at night … parents need to talk about an evening schedule and supervise it.”

Even with a perfect routine, adolescents naturally have a later body clock than children or adults. For this reason Blunden is supportive of the idea that school start times should be later, especially in high school, though she says it’s not as bad in Australia as in the US where many schools start at a “very early” 7.30am.