A higher level of intramuscular fat infiltration in the thighs was associated with a higher risk of developing heart failure, in a new study. The association was independent of other cardiometabolic risk factors and measures of adiposity such as body mass index. 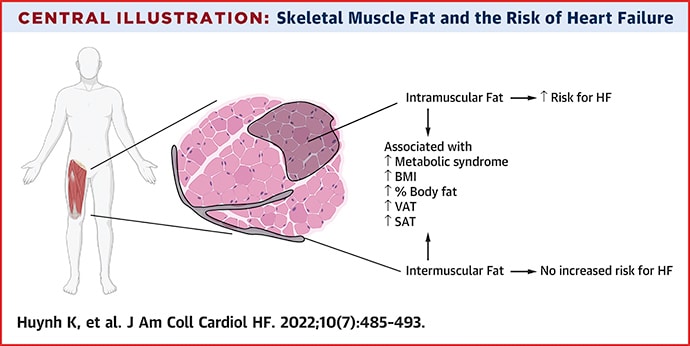 The observation raises the possibility of new avenues of research aimed at modifying intramuscular fat levels as a strategy to reduce the risk of developing heart failure.

The study is published online in the July issue of JACC: Heart Failure.

The authors, led by Kevin Huynh, MD, University of Texas Southwestern Medical Center, Dallas, explain that obesity is a known risk for heart failure, and has been incorporated into risk calculators for heart failure.

They note that ectopic fat in skeletal muscle can be measured through imaging and categorized as either intermuscular or intramuscular fat according to the location of muscle fat around or within skeletal muscle, respectively.

The researchers conducted the current study to characterize the association of both intermuscular and intramuscular fat deposition with heart failure risk in a large cohort of older adults.

They used data from 2399 individuals aged 70 to 79 years without heart failure at baseline who participated in the Health ABC (Health, Aging and Body Composition) study. Measures of intramuscular and intermuscular fat in the thigh were determined by computed tomography, and the participants were followed for an average of 12 years.

During the follow-up period, there were 485 incident heart failure events. Higher sex-specific tertiles of intramuscular and intermuscular fat were each associated with heart failure risk.

Individuals in the highest tertile of intramuscular fat had a 34% increased risk of developing heart failure compared with those in the lowest tertile. This finding was independent of other cardiometabolic risk factors, measures of adiposity including body mass index and percent fat, muscle strength, and muscle mass.

The association was slightly attenuated when adjusted for inflammatory markers, suggesting that inflammation may be a contributor.

The researchers note that skeletal muscle is a pivotal endocrine organ in addition to the role it plays in the production of mechanical power.

They conclude that in patients with heart failure, alterations in skeletal muscle function are most likely affected by multiple contributors, including inflammation, oxidative stress, and neurohormonal factors. “As these factors are also implicated in the pathogenesis of heart failure, intramuscular fat deposition may indicate a biological milieu that increases the risk of heart failure.”

He calls for further research to understand the mechanisms involved and to assess if this risk factor can be effectively modified to reduce the risk of developing heart failure.

Carbone reports that intramuscular adipose tissue can be influenced by dietary fat intake and can be worsened by accumulation of saturated fatty acids, which also contribute to insulin resistance.

He adds that SGLT2 inhibitors, drugs used in the treatment of diabetes that have also been shown to prevent heart failure in individuals at risk, can also improve the composition of intramuscular adipose tissue by reducing its content of saturated fatty acids and increase the content of monosaturated fatty acids.

The study results suggest that the quality of intramuscular adipose tissue might also play an important role and could be targeted by therapeutic strategies, he comments.

Carbone concludes that: “Studies testing novel modalities of exercise training, intentional weight loss, diet quality improvements with and without weight loss (ie, increase of dietary monounsaturated fatty acids, such as oleic acid), as well as pharmacological anti-inflammatory strategies should be encouraged in this population to test whether the reduction in intramuscular adipose tissue or improvements of its quality can ultimately reduce the risk for heart failure in this population.”