Three quarters of NHS services are FAILING to treat cancer patients quickly enough as only 37 meet Government targets (so is your local hospital keeping up?)

Hospital trusts in England are supposed to begin treatment within 62 days of a GP’s referral in 85 per cent of cases.

But last year only 37 out of 131 managed to hit that target, with 94 keeping seriously ill patients waiting longer.

In the worst performing health systems, almost 40 per cent of people had to wait longer than they should, while that figure was less than five per cent in the best.

Experts warned the longer people are made to wait before starting their treatment, the longer it will take them to recover from the ordeal of having cancer. 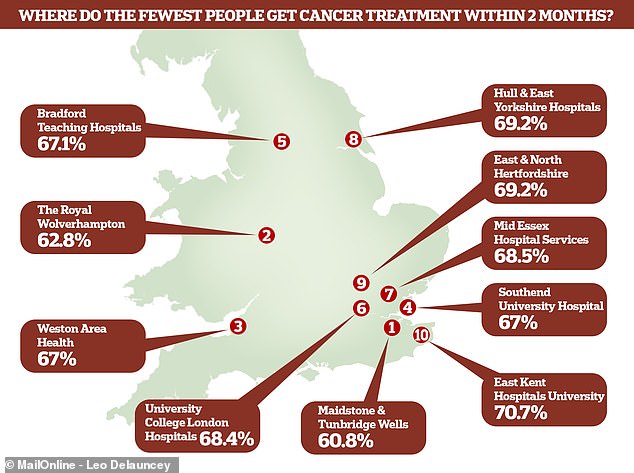 Figures uncovered by the BBC show the number of hospital trusts leaving 15 per cent or more of people waiting too long has almost tripled since 2014.

NHS England as a whole managed to treat just 79.4 per cent of people within 62 days of their urgent referral from a GP, while 32,000 people waited longer.

But there is wide variation among different areas of the country.

Maidstone and Tunbridge Wells NHS Trust, in Kent, was the worst performing, with just 60.8 per cent of people getting treatment within 62 days.

The hospital body insisted the situation there has improved since the figures were recorded.

A spokesperson said: ‘We have seen a large increase in demand with 23 per cent more suspected cancer referrals now than this time last year.

NHS figures revealed that patients are now more likely to wait more than two weeks to see a consultant than at any other time on record.

At least 93 per cent of people should be seen by a cancer specialist within two weeks of being urgently referred by their GP, the NHS says.

A record high of 19,963 people in England had to wait longer than two weeks to see a consultant after being sent by their doctor.

‘We have made changes to our systems and processes as well as invested in additional staff and facilities to increase the number of patients we see, diagnose and treat.

‘As a result, we have made significant improvements and are already in a much better place than the data published today shows.

‘We are confident that we will hit the national 62 day wait cancer standard in the summer, in a sustainable way going forwards.’

In all, 28 trusts failed to treat even three quarters of their patients on time – a measure that would still be significantly lower than the NHS target.

‘The longer people have to wait for diagnosis and get treatment, the longer it will impact them, their health and wellbeing and just getting through that experience,’ Macmillan Cancer Support’s Moira Fraser-Pearce told the BBC.

At the other end of the scale, the NHS in Kingston upon Thames smashed the target and treated 95.9 per cent of people within the 62-day limit.

Frimley, Bolton, Mid Cheshire and Tameside and Glossop all also posted figures higher than 90 per cent.

WHERE DID THE MOST PEOPLE START TREATMENT WITHIN 62 DAYS?

WHERE DID THE FEWEST PEOPLE START TREATMENT WITHIN 62 DAYS?

Improving cancer survival rates is one of the NHS’s priorities and in its long-term plan this year it said investment would be ramped up in improving diagnostics.

A spokesperson for the health service said: ‘Cancer survival is at an all-time high in England and that is because the NHS continues to put itself under pressure by ramping up the number of people who get checked so that more cancers are caught early when they are easier to treat.

‘A record 2.2million people underwent tests last year, up 15 per cent on just 12 months earlier, and nearly 130,000 were treated within the two month target.’

Monthly figures released today revealed the NHS’s performance has got worse on a number of other key measures.

These included an all-time low in the proportion of patients being seen by a cancer specialist within two weeks of a GP’s referral – the figure dropped below 90 per cent for the first time in April to 89.9 per cent.

Two-week referrals for patients with breast symptoms also dropped to a record low of 75.5 per cent.