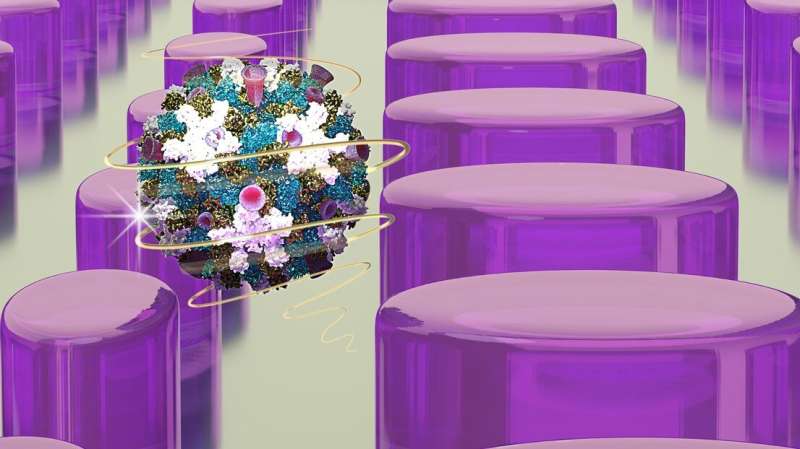 Researchers at EPFL have developed a technology based on nanophotonics and data science to detect and monitor cancer biomarkers at an early stage. Their research is published in Nature Communications.

Medical doctors examine body fluids of their patients, such as blood, urine, saliva, or nasal swabs, for diagnostics. This is because substances in such biofluids may provide vital information about one’s health state. Biosensors are emerging devices capable of analyzing such biosamples and look for substances indicative of disease. COVID-19 tests are the most current examples of biosensors. From body fluids, they can detect various substances such as the biomolecules on the surface of the virus (proteins), viral genetic material (RNA/DNA), or even the body’s immune response to the virus (antibodies). These biological substances, which may mark the presence of a disease, are called biomarkers.

The number of cancers is increasing

In this regard, biosensors are quintessential for health care by supporting the management of infectious diseases for preventing pandemics and the diagnosis of life-threatening conditions such as cancer. As the second leading cause of death worldwide, cancer accounts for more than 9 million deaths per year, and this number continues to increase. “An early diagnosis is often associated with an increased likelihood of cure, full recovery, and higher quality of life for a cancer patient. Therefore, having access to reliable biosensors for early cancer detection and treatment monitoring is extremely important,” says Hatice Altug, head of the School of Engineering’s Bionanophotonic Systems Laboratory.

One color of light

In order to make a significant impact on society, biosensors must be rapid, low-cost, easy to use, compact, and autonomous so that they can be used conveniently by doctors, paramedics, caregivers, and patients themselves. Optical techniques are powerful approaches that are exceptionally compelling for biosensing. “Most optical biosensors require a wide range of colors of light, like a rainbow, to perform reliably. This fact necessitates the implementation of bulky, expensive, and sophisticated instrumentation such as spectrometers to extract the most precise data from each color of the light spectrum, limiting the widespread use of optical biosensors,” says Yasaman Jahani, doctoral assistant. To address this issue, EPFL scientists introduced a novel concept that allows for employing only a single color of light to operate with a simple imaging detector. Yet, this system provides highly accurate biosensing information, as if the sensors were illuminated with the whole rainbow.

The new method leverages two smart tricks: nanophotonics and data science techniques. The optical chips used for biosensing comprise nanostructures made out of silicon. This material that has revolutionized the microelectronics industry now plays a key role in nanophotonics. The nanostructured silicon surfaces with features in the order of 100 nm trap the light on the biosample/chip interface efficiently. “This makes the biosensor very sensitive to the presence of the biomarkers, resulting in distinct changes of the incident light features. In the device, this feature is the change in the “amount” of the collected light known as light intensity,” says Yasaman Jahani. A typical camera continuously receives the light that passes through the biochip to acquire series of images from the biochip with intensity information over millions of image pixels. “When the biomarkers attach to the nanostructures on the biochip, the intensity change images are compiled from the induced intensity change of each pixel at a very high resolution,” adds the professor.

The light of the rainbow

Considering that one pixel’s signal could be noisy and deceptive, the researchers used a data science technique in combination with a prerecorded performance map to smartly process the intensity information from these large numbers of pixels by considering each pixel’s efficiency and adjusting its contribution to the final readout in a collective manner. “In daily life, this process is analogous to making a solid conclusion from a group of expert’s input by weighing their knowledge of the field carefully, rather than relying on them equally. This helps to refine the conclusion by minimizing the contribution of possibly inaccurate information from one person,” says Hatice Altug. In this way, the researchers were able to utilize a single color light and still able to get highly robust biosensing results similar to those obtained from a rainbow while removing the need for sophisticated, bulky, and expensive instruments

As a demonstration, the scientists applied the new biosensor for cancer diagnostics by detecting tumor exosomes, which are early-stage cancer biomarkers. Tumor-derived exosomes circulate in body fluids as tiny vesicles with diameter in the order of a hundred nanometers. They are secreted from cancer cells and carry crucial information, such as the cancer type and its stage. “Increasing data indicate that tumor-derived exosomes are not just waste products of cancer cells, but are used by the tumor to facilitate its growth at distant sites, an often lethal process called metastasis,” says Michele De Palma, who contributed to the study. EPFL’s imaging-based biosensor can monitor in real-time the breast cancer exosomes over an extensive detection range that is clinically relevant for both healthy and sick individuals.