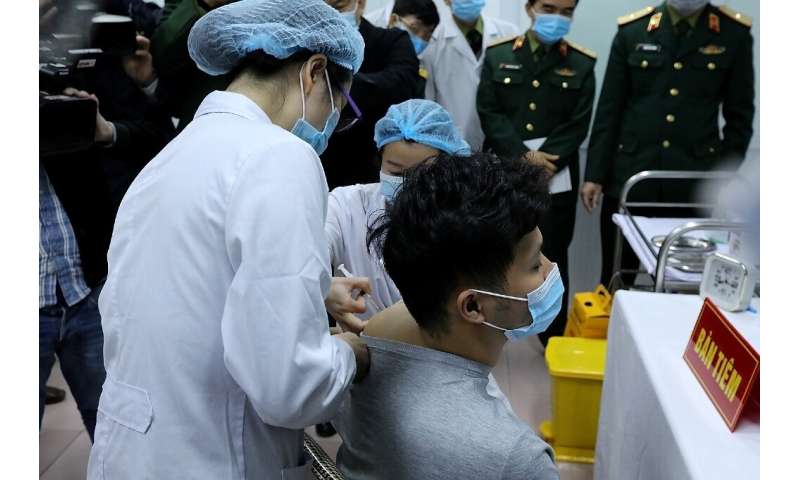 A Vietnamese pharmaceutical company began testing a coronavirus vaccine on volunteers in Hanoi on Thursday, as developing countries jostle with richer nations to access affordable inoculations.

Nanogen’s Nanocovax is one of four under development in Vietnam, and a company representative said it is expected to cost around $5 a dose.

Three volunteers received the jab on Thursday and will be monitored for 72 hours at the Vietnam Military Medical University.

Nguyen Ngo Quang from the health ministry said 60 participants will receive the vaccine in the first phase of the trial.

“All of us think that COVID is our enemy, so we are preparing for a battle… We have to prepare very carefully and we have to win (this battle),” he told reporters, describing the work on the clinical trial.

Vietnam has won plaudits worldwide for its handling of the pandemic—with just over 1,400 cases and 35 deaths in a country of around 96 million people.

There are concerns that at least a fifth of the world’s population may not have access to a COVID-19 vaccine until 2022, according to a study published Wednesday.

Wealthy nations—accounting for just 14 percent of the global population—have pre-ordered just over half of the vaccine doses expected to be produced by the 13 leading developers next year, researchers from the Johns Hopkins Bloomberg School of Public Health found.