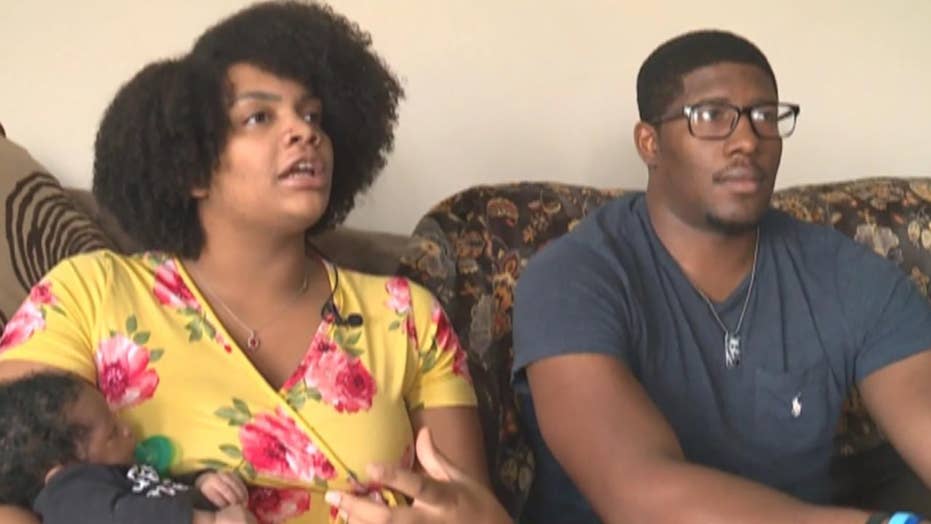 Raw video: Virginia woman Joachim Bienaime delivers baby in home bathtub after being told the baby was not coming yet by staff at the Naval Medical Center of Portsmouth.

A new mom in Chesapeake, Va., said that a hospital sent her home just hours before she delivered her son, leading her to give birth in the bathtub of her home.

LeeAnn Bienaime arrived at Naval Medical Center Portsmouth around 8:30 p.m. on Aug. 23 because she was experiencing contractions, she told WTKR. Roughly four hours later, she was told to go home and come back when her contractions were more severe, she said.

The couple left the facility and drove nearly half an hour back to their home. A few hours later, her contractions worsened. Before she knew it, could feel her son attempting to make his way out of her body. LeeAnn even claims she could feel her son’s head.

Her husband, Leo, called 911 as LeeAnn got into the bathtub. She told WTKR she attempted to wait to deliver her son until paramedics arrived, but it was too late.

“We were able to have a healthy birth, a healthy baby boy — that’s why I’m not completely enraged."

“I had to let instinct take over and just go with it and kind of release myself to the experience,” she recalled. With the help of her husband, LeeAnn successfully gave birth to a healthy son, Joachim.

“We were able to have a healthy birth, a healthy baby boy — that’s why I’m not completely enraged,” she said.“I feel like if it had gone another way, it would’ve been a different story.”

Looking back, Leo said he never would have taken his wife home.

Shauna O’Sullivan, a spokesperson for the Naval Medical Center Portsmouth, declined to comment on LeeAnn’s case, citing privacy laws. That said, she noted the facility has contacted the new mom about her experience.

“Naval Medical Center Portsmouth is committed to ensuring the safety of every patient and providing high-quality care," O'Sullivan said. "Whenever a patient has a concern about their care and treatment, we welcome the opportunity to discuss this with them and resolve any potential issues."