Poly ADP-ribose polymerase (PARP) inhibitors are pharmaceutical drugs that can be used to treat many different forms of cancer, including ovarian and breast cancer. They manipulate DNA repair pathways, causing the death of cancerous cells. 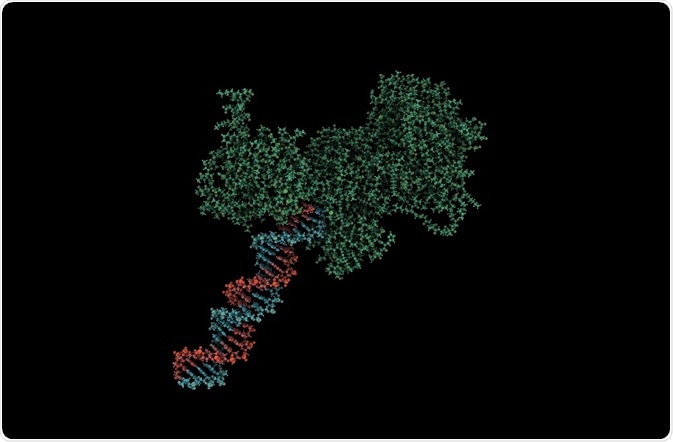 In mammals, 17 PARP family members have been discovered, and only 6 of these synthesize poly ADP-ribose (pADPr). PARP1, PARP2, and PARP3 have roles in DNA repair.

PARP1 binds to DNA that has suffered from single-stranded breaks (SSBs) and double-stranded breaks (DSBs). PARP1 then undergoes a conformational change that aligns key amino acid residues in the active site, thereby increasing its activity. Once PARP1 is activated, it synthesizes pADPr, which binds to proteins and alters their function.

PARP1 is crucial for base excision repair (BER), which replaces a single damaged base from DNA with the correct one. It also binds to DSBs and recruits the proteins required to initiate homologous recombination (HR), which is the process that repairs DSBs.

pADPr binds to BRCA1 to control HR-mediated DSB repair. pADPr is rapidly degraded by pADPr glycohydrolase to ensure that the levels of the pADPr present are reflective of DNA damage and that the response to pADPr is terminated following DNA repair.

PARP2 acts with PARP1 to synthesize pADPr in response to DNA damage. PARP3 suppresses non-homologous end-joining (NHEJ), which is an error-prone form of DSB repair.

By inhibiting DNA repair pathways, PARP1 inhibitors cause an increase in single-stranded breaks within DNA. This DNA damage is unrepaired and carried into daughter cells following replication, as BER is no longer occurring. This leads to an increase in DSBs in tumors that have BRCA1 and BRCA2 mutations.

As the repair genes for DSBs are mutated in these cancers, this damage is not repaired and the cells are tagged for apoptosis (controlled cell death). This is an effective way to treat these cancers as normal cells with functional BRCA1 and BRCA2 genes will repair the DSBs caused by the PARP inhibitors.

Once pADPr has been synthesized by PARP1, it recruits additional repair proteins and decreases the affinity of PARP1 for DNA. This allows PARP1 to dissociate from DNA so other repair proteins can bind. PARP1 that is inactivated by a PARP inhibitor remains bound to the DNA and inhibits repair.

BRCA1 recruitment to damaged DNA involves two steps. Firstly, pADPr interacts with the DNA at the damaged site. BARD1 then binds to the pADPr, which allows BRCA1 to bind.

Secondly, BRCA1 can interact with a modified histone (γ-H2AX), which is formed following DNA damage. In cells with BRCA1 mutations, only pADPr-induced BRCA1 recruitment can occur. PARP inhibitors can be employed to decrease the recruitment of BRCA1, therefore DSB repair does not occur.

PARP inhibitors may have a promising role in the treatment of cancers that have mutations in the DSB repair genes BRCA1 or BRCA2. These cancers include breast cancer (BC) and ovarian cancer (OC).

One FDA approved PARP inhibitor was used in phase II studies on individuals with BRCA1/2 mutations and progressive high-grade OC. These studies showed that the drug is able to increase progression-free survival from ~5 months up to ~11 months.

PARP inhibitors are less effective at treating BC due to the heterogeneity of the disease. The same medication showed a response in ~41% of patients with BRCA1/2-mutated BC during phase II trials. However, the drug showed no response in patients with triple-negative BC regardless of the BRCA1/2 mutation status.

Another potentially promising PARP inhibitor is currently in Phase III trials. It is being tested on patients with BRCA1/2-mutated and triple-negative BC.

PARP inhibitors can be an effective form of treatment for specific cancer types. As they only work by blocking the actions of PARP enzymes, the heterogeneity of some cancers (especially breast cancer) can reduce their therapeutic effects.

Some PARP inhibitors are currently in phase II and phase III trials. Hopefully, these trials produce significant results and the treatment of certain cancers can improve.

Sam graduated from the University of Manchester with a B.Sc. (Hons) in Biomedical Sciences. He has experience in a wide range of life science topics, including; Biochemistry, Molecular Biology, Anatomy and Physiology, Developmental Biology, Cell Biology, Immunology, Neurology  and  Genetics.