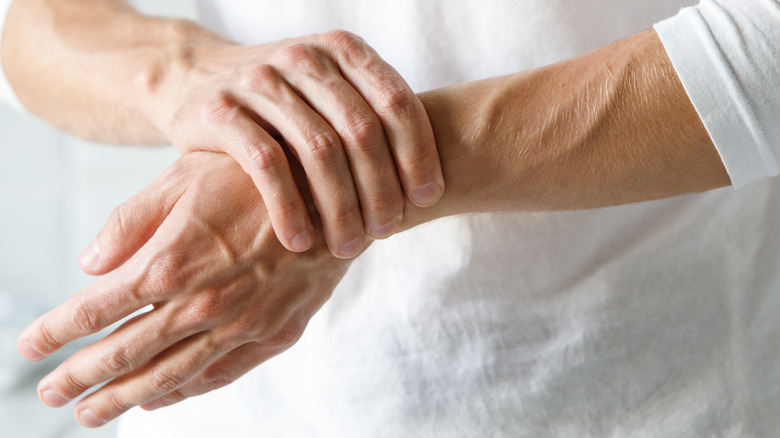 Experiencing body pain in any form can at times be deeply worrying. However, discomfort in some of the most functional areas of the body, including the hand or wrist, can be extra concerning. Thankfully, pain in your wrist is generally not related to any life-threatening conditions. But, what does it mean when your right wrist hurts?

According to Healthline, some of the most common causes of wrist pain include carpal tunnel syndrome, which occurs when nerves in and around the wrist become compressed, a condition known as gout, which is caused by a buildup of uric acid in the wrist, and the inflammation of the joints in a person’s wrist otherwise known as arthritis, which can lead to swelling and stiffness in the affected area. Another potential cause of wrist pain can be attributed to injuries in your wrist, including sprains and broken bones.

Per Mayo Clinic, the type of pain you experience in your wrist may vary depending on the root cause. For example, forms of arthritis, including osteoarthritis, are generally described as a dull pain, while conditions such as carpal tunnel syndrome are known to cause pins-and-needles and tingling sensations, particularly at night.

Here's when you should see a doctor for your wrist pain 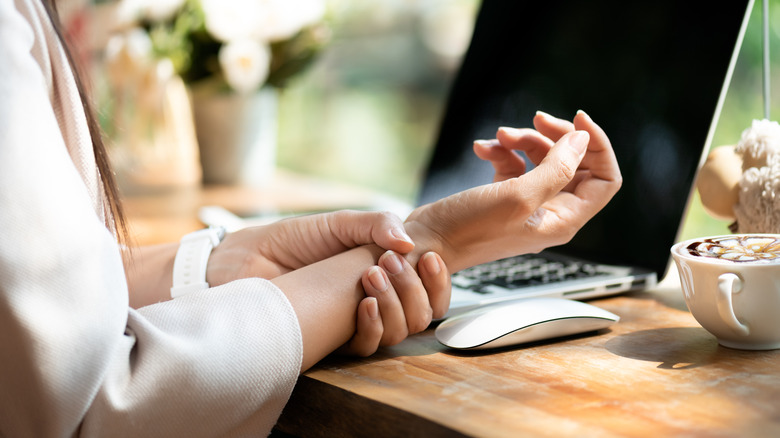 As Healthline reports, pain in the wrist is often accompanied by other symptoms, including numbness in the hand, swollen fingers, swelling or redness around the wrist, sharp pains in the hand, warmth in a joint close to the wrist, pain or numbness that gets worse at night, and a difficulty gripping objects.

Per Mayo Clinic, some people are more at risk from suffering from wrist pain than others, including those who regularly partake in sports including football, bowling, golf, gymnastics, snowboarding, and tennis — as well as those who are in a physically repetitive line of work, and people who already live with conditions such as diabetes, obesity, and rheumatoid arthritis.

If you’re experiencing wrist pain and the affected area is warm and red, and you have a fever over 100°F, it is advised you seek immediate medical attention as this could indicate a serious illness known as infectious arthritis. It is also advised you contact your doctor if you are unable to move your wrist or it looks abnormal, as this could signal a broken bone. Per Healthline, it might also be a good idea to pay your doctor a visit if your wrist pain gradually worsens over time or begins to interfere with your daily tasks.