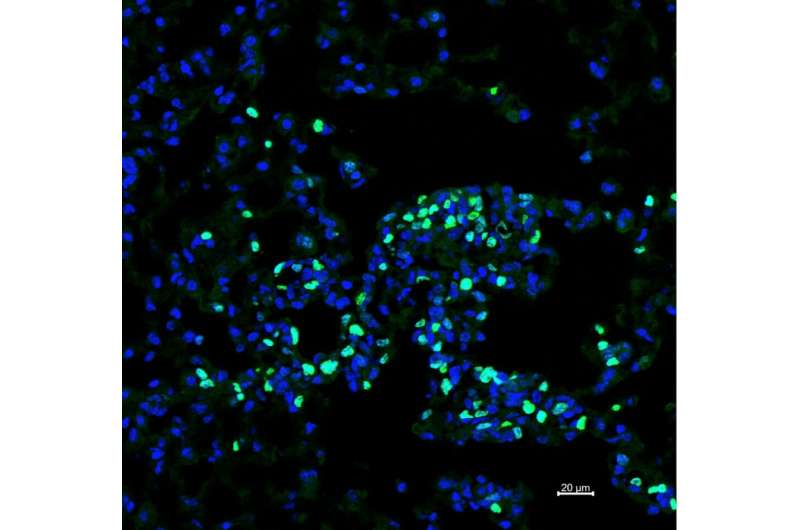 A new study at Tel Aviv University found that eosinophils—a type of white blood cells—are recruited to the battle against cancer metastases in the lungs. According to the researchers, these white blood cells produce destructive proteins of their own, while at the same time summoning the immune system’s cancer-fighting T-cells. The researchers believe that their findings can contribute to the development of innovative approaches to cancer immunotherapy treatments, based upon the collaboration between T-cells and eosinophils.

The study was led by Prof. Ariel Munitz and Ph.D. student Sharon Grisaru of the Department of Microbiology and Clinical Immunology at the Sackler Faculty of Medicine. The paper was published in Cancer Research.

The researchers explain that eosinophils are white blood cells of the immune system that produce powerful destructive proteins—originally intended for fighting parasites. However, in the modern Western world, where high levels of hygiene have significantly reduced the menace of parasites, eosinophils often have a negative impact on humans, inducing phenomena like allergies and asthma.

Hypothesizing that the destructive power of eosinophils may prove beneficial if turned against cancer cells, the researchers initiated the current study. Prof. Munitz explains that they “chose to focus on lung metastases for two main reasons: First, metastases, and not the primary tumors, are often the main problem in treating cancer, and the lungs are a major target for the metastasis of many types of cancer.  Second, in a preliminary study we demonstrated that eosinophils gather in tumors developing in mucous tissues like the lungs, and therefore assumed that they would be found in lung metastases as well.”

To begin with, the researchers examined human cancer tissues—biopsies from lung metastases taken from breast cancer patients. They found that the eosinophils reach the lungs and penetrate the cancer tissues, where they often release the destructive proteins they carry.

To examine the role of eosinophils in metastases, the researchers used an animal model. They found that lung metastases developing in the absence of eosinophils were much larger than those exposed to eosinophils. These findings led to the conclusion that eosinophils fight cancer effectively, but the question still remained: How do they do it?

Prof. Munitz says that they “observed that when eosinophils are missing, the tissue also lacks T-cells—white blood cells known for fighting cancer. Consequently, we assumed that eosinophils combat cancer through T-cells. Our next task was to understand the mechanism underlying this process.”

An extensive analysis of eosinophils found in the metastases led to two significant findings: First, in the presence of cancer eosinophils release large quantities of chemokines—substances that summon T-cells; second, these chemokines are released when eosinophils are exposed to two other substances found in the cancer’s environment, called IFN-g and TNF-a. In other words, in response to IFN-g and TNF-a, eosinophils recruit the T-cells for reinforcement. Ultimately, T-cells arriving and developing in the affected lungs slow down the growth of tumors.