For new mothers thinking about returning to gym classes after giving birth, the advice – from doctors, physios and friends – is always the same. Wait at least six weeks and then start slowly with gentle exercise.

But like much of the medical advice given to new and expecting mothers, this recommendation is based on little evidence. While there have been some attempts to study the effects of postpartum exercise on sleep, pelvic floor muscles, urinary incontinence and pelvic organ prolapse, experts acknowledge we have limited knowledge when it comes to knowing just how exercise in the period after birth affects women. 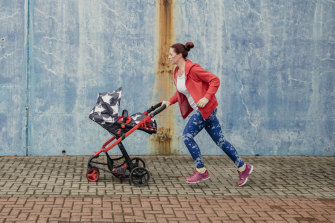 The issue of post birth exercise is complicated by the fact that each pregnancy is highly individual.Credit:iStock

There is also no consensus among experts on what a “gentle” exercise regime actually looks like.

“Clinicians loosely define the postpartum period as six to eight weeks after the birth because many of the physical changes that occur during pregnancy will persist for this length of time,” says CQ University’s Dr Melanie Hayman, who has studied exercise and pregnant women for more than a decade.

“However, many of these physical changes will continue well beyond the six to eight week mark, which is why I encourage all women to seek advice from a women’s health physiotherapist before returning to exercise.”

“Many of these physical changes will continue well beyond the six to eight week mark, which is why I encourage all women to seek advice from a women’s health physiotherapist before returning to exercise.”

The issue is complicated by the fact that each pregnancy is highly individual.

“Yes, we all have a gestation for at least 30 weeks, we have these physiological changes, but the extent to how they occur and where is hugely varied,” Hayman says.

Research into how and when women should start exercising again after giving birth is minimal at best, Hayman says. And this is leaving many women confused about how they can regain their pre-baby fitness.

While women’s health in general is under-researched, women’s exercise science has a particular research deficit. Hayman believes it’s because exercise has “predominantly been seen as the domain of men”.

“If you look throughout history, males were professional athletes before women. Exercise for women was seen through the incidental physical activity sense, stuff you do to keep the house running,” she says.

Yet as women’s sport becomes more popular, there is a growing recognition that the research gap must be addressed. Sports and exercise doctor Rachel Harris, who works with female athletes, is currently leading the Australian Institute of Sport’s Female Performance and Health Initiative.

The project, established in October 2019, was initially meant to last six months but has since been extended.

“It initially started because people were asking for information about how the menstrual cycle and hormones affect performance,” Harris says.

While her team has developed a suite of online resources that help inform athletes, parents, coaches and doctors about how pelvic and breast health, body image, hormones and more can affect women who play sport, they have yet to look at pregnancy and post-birth.

“We need to develop more resources around that: currently, there is no research that backs up how much exercise you can do as an elite sports woman during and post-pregnancy,” Harris says.

Minahan thinks that’s because it is difficult to perform research where you potentially put baby or mother at risk.

Dr Gregory Jenkins, a Sydney-based obstetrician and gynaecologist who is a spokesperson for the Royal Australian and New Zealand College of Obstetricians and Gynaecologists, says research into women’s physical health post-birth is an “empty space”.

“Women clearly need that guidance, and they want it more than ever before.”

“There aren’t even clear definitive guidelines on when women should start driving after having a c-section – if we don’t know something as simple as that, it shows you how neglected the area is,” he says.

Jenkins believes that women’s postpartum wellbeing has generally not been taken seriously as society believes “it’s not about you, the woman, anymore; it’s about you as a mother taking care of a baby.”

However, tides are turning: in the last two years alone, Jenkins says there’s been a surge in women’s health physiotherapists to meet demand from new mothers.

So how can women – no matter their fitness level and ability – ensure they get the best advice post birth? It may be a matter of asking the right questions rather than blindly following existing guidelines.

“Ask your doctor things like, ‘are you happy for me to be doing some gentle exercises?’, and quantify what that is,” Harris suggests. “Ask if there is any reason you shouldn’t be doing an exercise, if there are limits to what you could do, and if so, why?”

New mothers should also book in to see a women’s health physio. Even one session can set women on the right track, Hayman says. “They’ll make sure the pelvic floor is ok, abdominal separation is OK, that it’s safe for women to return to exercise … [and] you can get the physio to give you a program.”

In the meantime, Hayman says the research is slowly coming along. “Women clearly need that guidance, and they want it more than ever before.”

Make the most of your health, relationships, fitness and nutrition with our Live Well newsletter. Get it in your inbox every Monday.

Most Viewed in Lifestyle