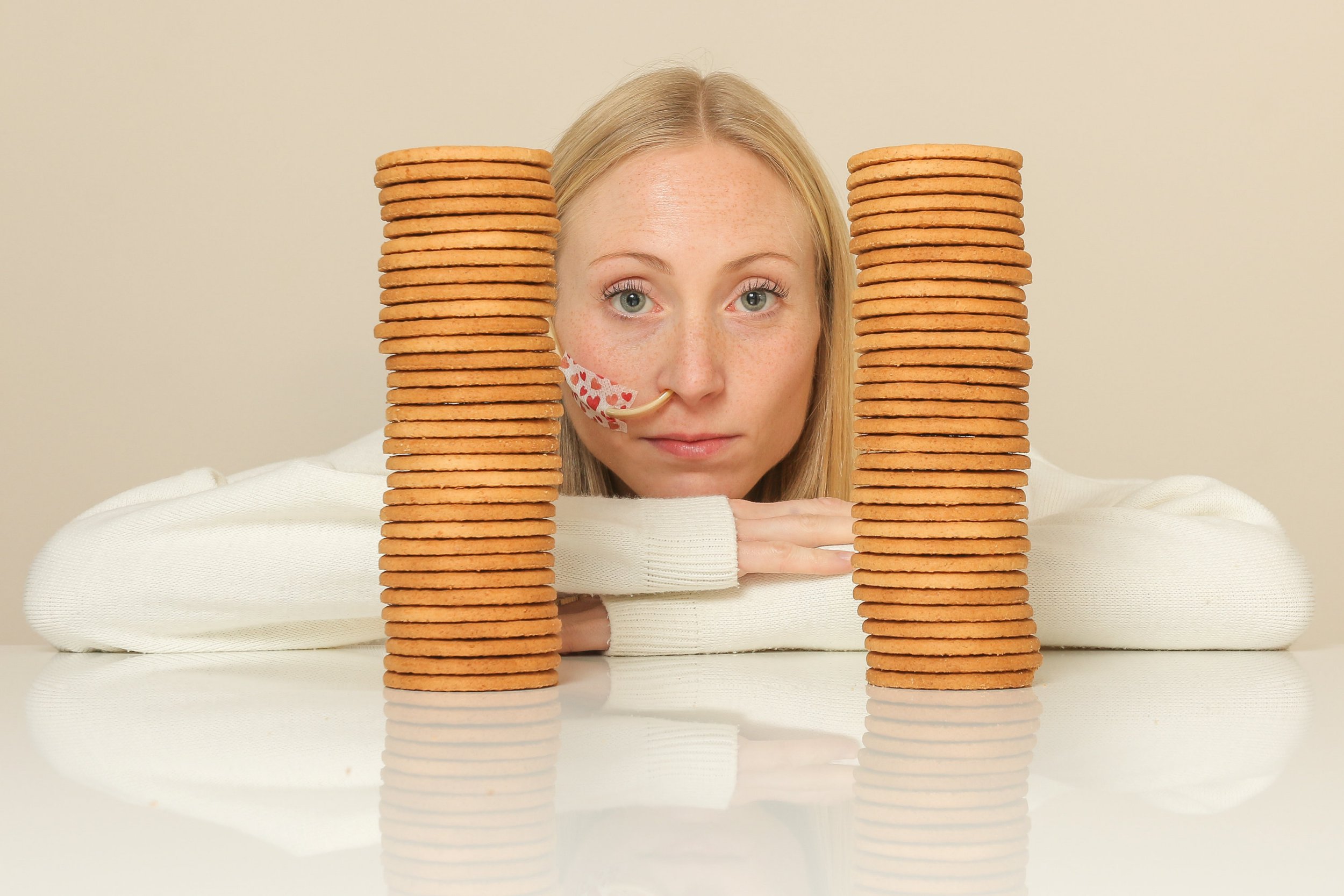 Talia Sinnott eats up to ten digestive biscuits and plain crackers a day because it’s the only food she can keep down.

The 25-year-old suffers from gastroparesis, a chronic illness which means her stomach struggles to process food.

She was diagnosed with the rare condition four years ago, at a time when her illness was so bad, she could be sick up to 30 times a day.

For the last six months the trainee clinical psychologist has relied on a feeding tube to provide her with nutrients, and she’s now trying to raise £80,000 to have a gastric pacemaker fitted which will help her stomach accept other foods.

Talia, from Tettenhall, Wolverhampton, said: ‘It’s very hit and miss, some days the biscuits sit okay, and sometimes they don’t.

‘I can’t eat a lot in one go and I have to pick at them throughout the day. I also do this with Ritz crackers.

‘There is no pattern at all to my eating so it’s always a guessing game. One day I can be absolutely fine with eating a certain kind of food and then three days later I can’t tolerate it.

‘I went through a stage of being able to stomach mash potato because it’s soft but now I can’t.

‘It’s really difficult because it’s not like an intolerance where you can avoid a certain type of food – it’s very random.’

Talia first experienced her symptoms in 2018 when she started ‘feeling full’ and as though ‘food was sitting on her chest’.

Her symptoms flared up intermittently, but over the years they have become more aggressive and persistent.

She coped with the problem by eating smaller meals. Her GP also prescribed her medication, but they only helped to alleviate her symptoms for a short time.

The in January 2022, her health rapidly deteriorated when she contracted a virus which attacked her digestive system.

After several medical examinations, she was eventually diagnosed with gastroparesis, a long-term condition where the stomach cannot empty in the normal way.

Talia is now desperate to have a gastric pacemaker fitted which will send impulses to her stomach muscles to allow it to digest food.

She added: ‘So little is known and understood about my chronic illness which is why it is often misdiagnosed, and people are left without a diagnosis for years or told they have an eating disorder.

‘I was very fortunate to get a quick diagnosis. Although my symptoms have been there since 2018, it is only this year that they have really been bad.’

Gastric pacemakers are not currently routinely available on the NHS – which means Talia is desperate to raise enough funds to get one.

She explained: ‘So far, we have spent around £40,000 on tube insertions and appointments and I need another £40,000 for the gastric pacemaker to be fitted – therefore the fundraiser total is £80,000.

‘At the moment the main priority is to increase my weight, so I’m fit and healthy for surgery.’

Talia hopes to have the fundraiser total in the next six months, and to have her pacemaker fit in the next year.

She added: ‘I get tired very easily and with the nausea, I am always thinking about where the closest toilet is.

‘My life has been put on pause and it’s been very difficult.’

A Talia says that she particularly struggles during Christmas time.

She said: ‘With Christmas coming up, it’s sad. I was a very big foodie before, and I loved food and still do.

‘Even though I am tube fed, I never feel full. Your brain doesn’t get that signal that you’re full and I crave food all the time.

‘But, at the end of the day it’s one day, and hopefully next year I can enjoy Christmas food.

You can donate to Talia via her GoFundMe page.