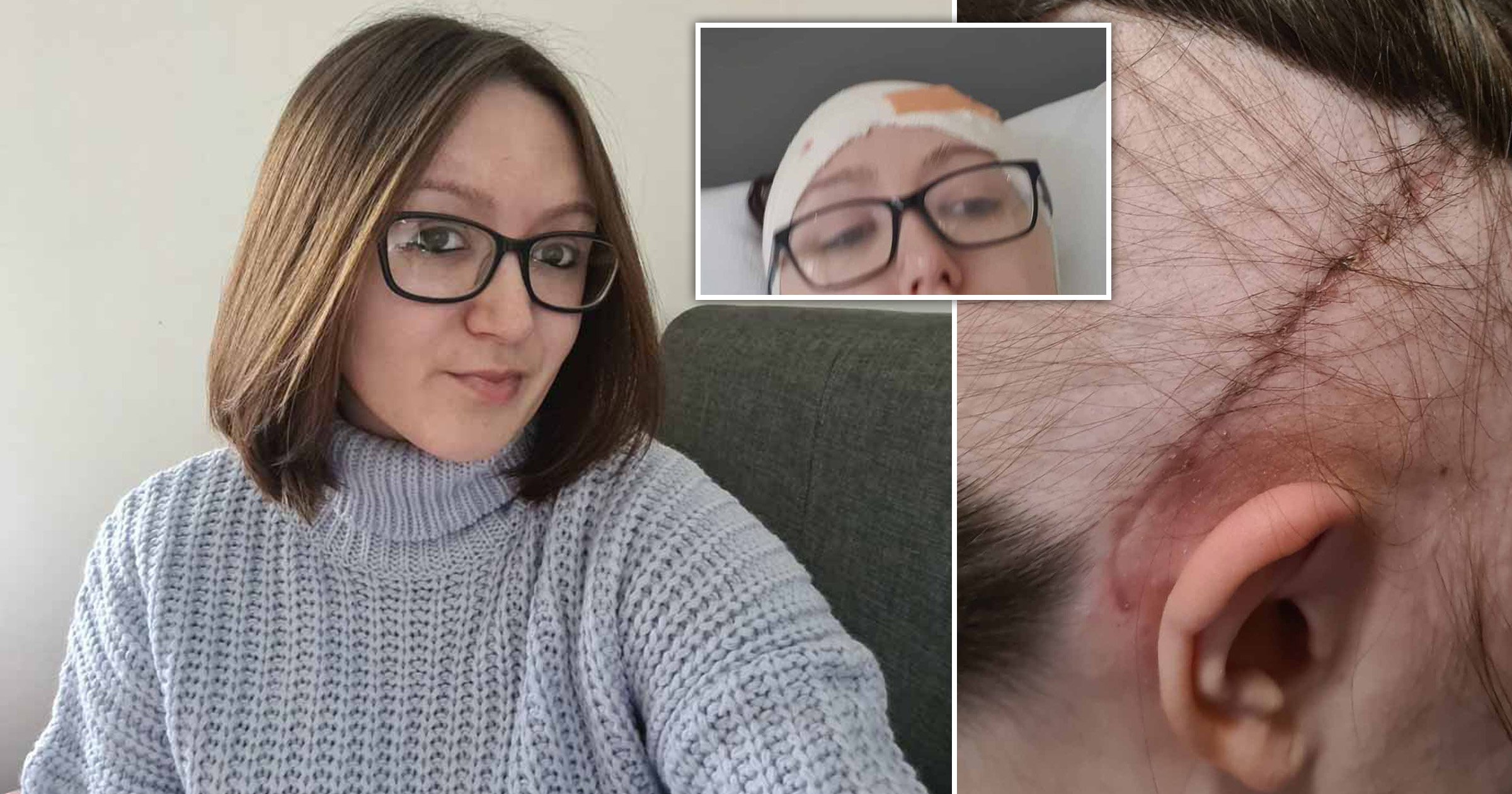 Following a night of heavy drinking in 2019, Danielle Freeman, 23, suffered her first grand mal seizure while on shift at McDonalds.

‘I was on the headset at the drive-thru and I suddenly made a screaming noise,’ she said.

‘I don’t remember any of this, but my boyfriend and my flatmate both worked at McDonald’s with me and came rushing over.

‘I slowly started to fall to the floor and a manager caught me.

‘I know now it was a grand mal seizure, one that causes loss of consciousness and violent muscle contractions, and lasted upwards of two minutes. I then passed out for another five.

‘When I woke up there was a paramedic, my boyfriend and my manager all standing over me and I had no idea what was going on. I felt so woozy.’

Danielle, now a personal trainer and nursery worker living in Portree on the Isle of Skye, was taken to hospital where she was referred for an MRI scan, which took five months to arrive.

Her doctors assumed the seizure was caused by too much alcohol and told Danielle to take it easy on nights out going forward.

Later in the year, in December, she went on another night out, making sure to follow her doctor’s advice to drink no more than four drinks and take water breaks in between.

The next morning however, her boyfriend Connor, 26, told her she had another seizure in her sleep.

‘Compared to the first seizure, I didn’t really feel anything,’ she remembered.

‘I just felt like I woke up from a normal sleep.

‘I felt tired from the night out, but I immediately stopped drinking after that.’

When she received the letter containing the results from her MRI scan at the start of 2020, Danielle quickly found out that alcohol and partying were not the source of her seizures – it was actually a pea-sized brain tumour that could have been there for up to seven years.

‘I got a letter and it said that there was a benign mass on my right temporal lobe,’ she recalled.

‘Because it was benign, I wasn’t as worried as I could have been.

‘But knowing there was something in my brain that shouldn’t be there was horrible.’

It turned out that her symptoms had nothing to do with her lifestyle, but the tumour made it so that her brain couldn’t process the hangovers.

Initially, Danielle turned down surgery to have the tumour removed and managed her symptoms with daily anti-seizure medication. She continued to follow a healthy lifestyle and cut out alcohol completely.

But, at the end of 2020, a scan revealed that the tumour was growing and Danielle was diagnosed with having a grade two brain tumour.

She decided to go for the surgery.

Initially deemed non-urgent, Danielle’s case escalated when her eyesight became blurry in January 2021, caused by the tumour pressing on her brain.

By April 2021, alone due to Covid restrictions, she underwent the five hour procedure to have the tumour removed.

And thanks to her healthy lifestyle, Danielle was discharged after three days after bouncing back so quickly.

She then had six weeks of radiotherapy and has been having 12 months of chemotherapy since last August.

‘My energy levels are so much better now. I work out up to five days a week,’ said Danielle.

‘The chemotherapy can make me tired, but I feel so much better.

‘I can even have the odd drink now, but just have to make sure I take my seizure medication.’

With her treatment soon to finish, Danielle is now helping to promote The Brain Tumour Charity’s Better Safe Than Tumour campaign, which launched this week.

It aims to raise awareness of the signs and symptoms of brain tumours which, in adults, include persistent and severe headaches, changes in vision, seizures, balance problems or dizziness, memory problems, nausea and vomiting, fatigue, loss of taste and smell, speech difficulties and numbness or tingling in the extremities.

It also highlights the importance of linking symptoms, knowledge that would have been extremely helpful for Danielle.

‘More awareness of the signs and symptoms of brain tumours would have stopped me from blaming myself so much,’ she said.

‘I would have also known not to brush off the symptoms and instead to push for answers and even to suggest being sent for an MRI scan… when I started suffering with fatigue [in 2018].

‘This campaign will really help people with symptoms to ask more questions and understand what could be happening to them.

‘In turn, this could lead to an all-important early diagnosis that could save lives.’