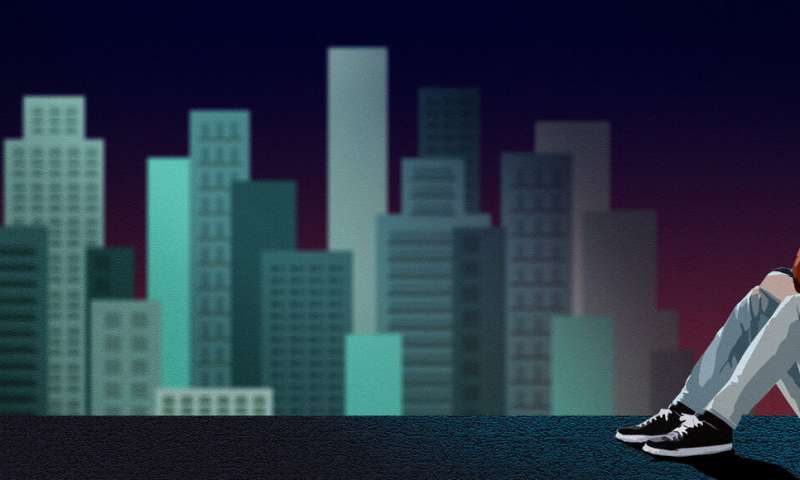 Suicide among younger people is often so spontaneous that it can be prevented if they do not encounter a potentially dangerous place outdoors. Getting the form of the built environment correct is therefore a very important factor in stopping suicide among young people. This is the finding of Charlotta Thodelius, a researcher at Chalmers University of Technology, Sweden.

Combining sociology and criminology with architecture in her doctoral thesis, Charlotta Thodelius’ dissertation centres on injuries among young people up to 19 years old, and how the built environment influences these injuries. It consists of three parts: accidents in the home environment, the risk of violence at school, and the importance of location in suicidal situations.

Globally, suicide is the second most common cause of death among young people. Their suicide often differs radically from adults when it comes to the level of planning and conviction.

“I have observed that younger people commit a different type of suicide from adults,” says Charlotta Thodelius. “They are spontaneous and act very impulsively. They might not want to actually die, they just want something to stop. It might be something that has been going on for a while, but it can also be something that, as adults, we might find quite trivial—breaking up with a partner, fighting with parents, doing badly in a test, or being gossiped about.”

She continues, “If you compare with suicide among adults, that is usually more well-planned. Bills are paid, letters are sent, and a place is chosen where they won’t be easily found beforehand—out in the woods, or in a hotel room.”

She believes that we should first understand suicidal impulses among the young as their way of dealing with a difficult situation. In this case, the deciding factor could simply be if they have easy access to a deadly place or not. They seek out desolate, but easily accessible places which they know well and are close to where they spend most of their time.

If there are obstacles to taking their own life in these places, there is a high chance that they have no plan B and will abandon the attempt. After the acute stage of the crisis passes, they may not make another attempt to commit suicide. Earlier research, mainly in the USA, has already demonstrated that when you set up obstacles at ‘hotspots’, the total number of suicides goes down and there is no corresponding increase in other places instead.

“There are therefore good reasons to modify the built environment around known hotspots and try to avoid creating new ones in city development,” says Charlotta Thodelius. “This requires input from engineers, city planners and architects.”

One difficulty is that no one really has authority over the question. This hinders collaboration between different actors, from civil engineers to emergency personnel, psychiatrists and local authorities.

“These groups have to speak to one another, and really analyse each hotspot individually to be able to take effective measures. Standard solutions, for example glass barriers on train platforms which have been installed on certain train tracks in Japan, work poorly. There are good local examples where the collaboration required has been achieved, but it is not done systematically throughout society.”

Furthermore, it is important that preventative measures do not disturb the original and everyday function of a place, or their pleasant atmosphere. Attractive places with many visitors rarely become hotspots. In city planning, it is necessary to avoid creating new dangerous places in desolate ‘no-man’s-land’ areas where city builders don’t really cooperate; environments where it’s not natural for people to be.

“The best thing is to understand and adopt this perspective as early as the planning stage for new buildings and city areas,” says Charlotta Thodelius. Adjustments made after construction are more difficult, but even existing hotspots can usually be made safer while still maintaining a pleasant atmosphere and their functionality.

She has seen many examples, both good and bad.

“A bad example would be a bridge with unattractive suicide nets set up. This can easily stigmatise a place, and make the general public avoid it. A better example is a bridge, with a fence covered in plants and flowers. This doesn’t affect a place in the same way—instead of being perceived as a suicide prevention measure, it can rather be seen as something to simply make the place nicer.”

She previously completed a Bachelor’s in sociology and a Master’s in criminology.

The part of the study looking at violence in school shows that a key factor in reducing risks is getting the balance right between supervision and freedom in ‘unowned’ places, such as corridors, shelters and bathrooms, the places where most violent events occur. Charlotta Thodelius believes that many schools have too much separation of the premises for teachers and students, which results in too little natural contact between adults and young people.

The part of the study on accidents in housing environments shows that it is mainly stairwells in multi-occupant buildings and outdoor areas near residential buildings that would benefit from preventative work, focusing on design issues to reduce injury events.