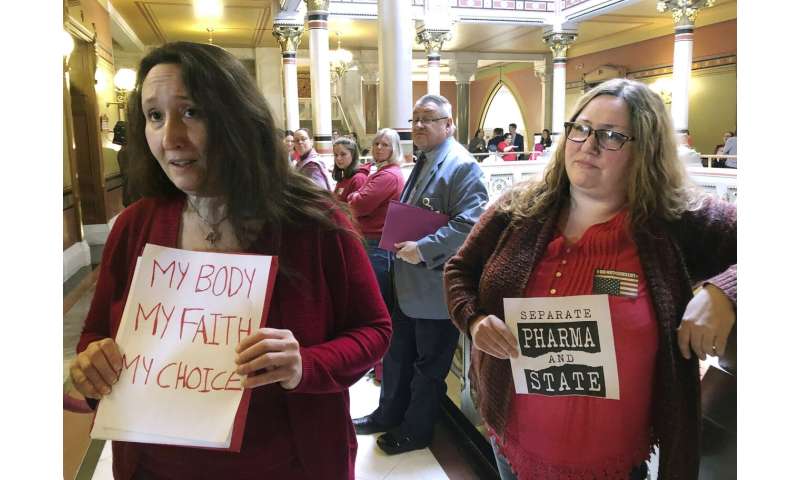 The contentious debate about whether Connecticut lawmakers should scrap a religious exemption for certain childhood vaccinations could inadvertently end up sinking efforts to make the flu vaccine more accessible to children.

A bill that would allow trained pharmacists to administer the influenza vaccine to children 12 years and older cleared the General Assembly’s Public Health Committee in a 17-7 vote this year, but it later died on the Senate calendar due to inaction.

Bill supporter, Nathan Tinker, CEO of the Connecticut Pharmacists Association, said his organization doesn’t plan to push hard for it again in the next regular legislative session because he is worried the debate over the General Assembly’s efforts to scrap a religious exemption for some vaccines will ultimately spill over into discussions about the flu shot and likely doom the bill in the short, three-month session.

“There is a community of people who are concerned about the impact or potential impact, whether real or perceived, about vaccines,” Tinker said. “And they get a lot of attention from legislators and that can make it difficult.”

When the new legislative session opens in February, lawmakers are expected to consider ending the state’s longstanding religious exemption after newly released data showed a continued decline in immunization rates for measles, mumps and rubella among kindergarteners. That proposal has already met resistance and some of the concerns raised are like the ones voiced during this year’s discussion of the flu vaccine bill.

Legislators were flooded with testimony earlier this year from parents with concerns about whether making the vaccine more convenient could lead to injuries that pharmacists might not be trained recognize. Others questioned the motives of the pharmaceutical industry and necessity of flu shots.

Dr. Sandra Carbonari, a primary care pediatrician in Waterbury and the medical director of the Connecticut Chapter of the American Academy of Pediatrics, also opposed the bill, but for different reasons. She questioned whether state regulations for providing the flu vaccine to children who receive Medicaid benefits might ultimately make the shot too expensive, and whether DPH’s vaccine program can handle a large increase in the number of providers.

She also noted that immunizing a child can be complicated.

“Determining the appropriate vaccine for a pediatric age patient is not simple and requires accurate information about the medical history and current state of health,” she said in written testimony.

Supporters of the flu shot bill argue that allowing parents to drop by a pharmacy, rather than make an appointment with a pediatrician, would ultimately lead to higher flu immunization rates. The bill had the support of the state’s Department of Public Health, which noted three children in Connecticut died from flu-related complications during the 2017-18 flu season.

Pharmacists in Connecticut are currently allowed to vaccinate people 18 years or older. According to DPH, individuals under 18 can be administered the flu vaccine by advanced practice registered nurses at retail locations, such as a CVS MinuteClinic.

Sen. Heather Somers, of Groton, the top Senate Republican on the Public Health Committee who co-sponsored this year’s bill, stressed that the legislation is voluntary and requires the consent of a parent or guardian.

Somers contends the legislature just ran out of time to act on the bill earlier this year, and she plans to resurrect it when lawmakers convene again in February for the 2020 session.