Lung cancer is still the leading cause of death in both men and women around the world, killing more than one million people every year. Extensive epidemiological data clearly links cigarette smoking with lung cancer, mostly due to the presence of cancer-causing chemicals called carcinogens that are present in present in cigarette smoke. 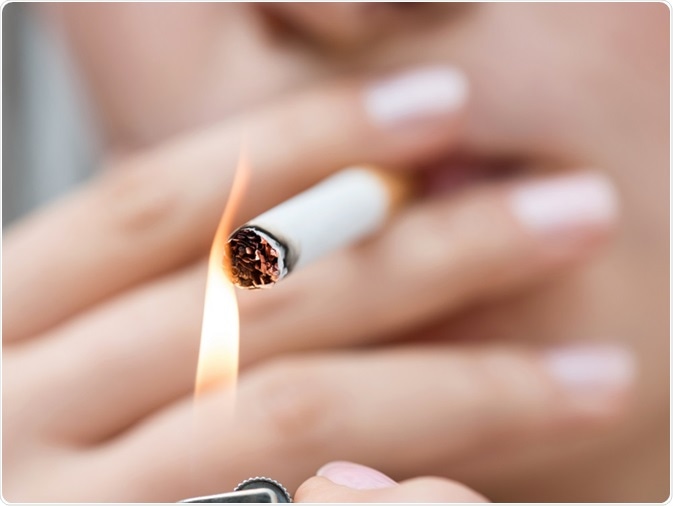 Cigarette smoke is a complex, reactive and dynamic mixture containing approximately five thousand chemicals, which arguably makes it the most important source of toxic chemical exposure in humans. A large amount of studies on carcinogenesis caused by cigarette smoke and its constituents give a firm base for understanding the underlying mechanisms of lung carcinogenesis in humans.

The mainstream smoke that emerges from the cigarette mouthpiece is an aerosol with approximately 1010 particles per mL. About 95% of the total smoke content is made up of gases (also known as vapor phase); principally oxygen, nitrogen and carbon dioxide. The particulate phase is quite rich and contains at least 4000 various compounds, most of which are hazardous carcinogens.

Among such diversity in tobacco smoke, there are more than sixty identified carcinogens. For 20 of them there is convincing evidence of their causative role for lung cancer formation in laboratory animals and/or humans. Of these, the major players are likely aromatic polycyclic hydrocarbons and tobacco-specific nitrosamine 4-(N-nitrosomethylamino)-1-(3-pyridyl)-1-butanone.

Cigarette smoke can also be viewed as a tumor promoter. Most of its activity seems to stem from uncharacterized, weakly acidic compounds. For example, catechol is one of the most salient co-carcinogens found in cigarette smoke, but it also includes methylcatechols, undecane, decane, fluoranthene, pyrogallol, pyrene and benzopyrene.

In addition, cigarette smoke harbors high levels of acrolein, a recognized toxic compound to the pulmonary cilia, as well as other agents (such as acetaldehyde, formaldehyde and nitrogen oxides) that could indirectly contribute to the mechanism of pulmonary carcinogenicity.

While individual contributions of aforementioned carcinogens may never be known due to the complexity of the system, there is little doubt that their removal from cigarette smoke (if that was even a possibility) would substantially decrease the negative consequences of inhalation.

How Carcinogens in Cigarette Smoke Cause Lung Cancer

The carcinogens in cigarette smoke that are inhaled can be metabolically activated (most notably by cytochrome P450 enzymes in the liver) to intermediate compounds that covalently or (sometimes) directly bind to DNA. The resulting DNA adducts are key to chemical carcinogenesis since they can result in miscoding and permanent mutations.

If such mutations are seen in critical regions of important growth control genes, the end-result may be the loss of normal cellular growth control mechanisms, genomic instability, as well as cancer in the long run. This is supported by a substantial body of evidence that demonstrates higher levels of DNA adduct levels in smokers when compared to the individuals that do not smoke.

Furthermore, nicotine and tobacco-specific nitrosamines are known to bind to nicotinic and other cellular receptors, which results in protein kinase B activation and other changes. This then leads to decreased apoptosis (i.e.programmed cell death), increased transformation and increased growth of small blood vessels. Although nicotine per se is not carcinogenic, it may prompt carcinogenicity in ways that are still not completely elucidated.

Cigarette smoke also contains tumor promoting factions and inflammatory agents, and activates cyclooxygenase-2 and epidermal growth factor receptor. Many studies have demonstrated the co-carcinogenic effects of catechol, which is an important constituent of cigarette smoke. Finally, inflammation inherent to smoking is linked to tumor promotion and cancer development.

Since the risk for lung cancer (but also other tobacco smoke-related diseases) appears to be dose-dependent, the concentration reduction of the most important carcinogens in cigarette smoke may lower the risk of tobacco smoking. And although there are still a handful of unresolved issues, the current state of knowledge enables us to construct reasonable and testable hypotheses addressing the susceptibility of individual smokers to lung cancer induced by tobacco.