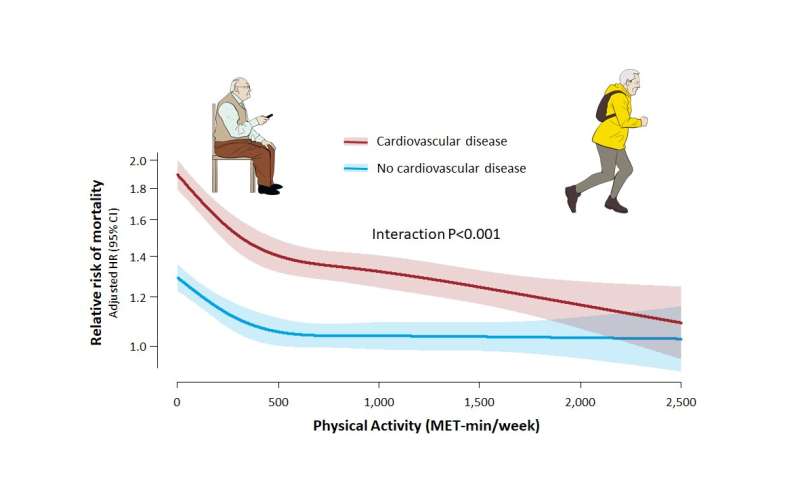 A study of nearly half a million people has found for the first time that those with heart or blood vessel problems benefit more from having a physically active lifestyle than do healthy people without cardiovascular disease (CVD).

Increased physical activity reduced the risk of dying during a six-year follow-up period for people with and without CVD, but the researchers found the greatest reduction in risk was in people with CVD and this continued to reduce the more exercise they did.

There is plenty of evidence to show that physical activity reduces the risk of dying from CVD in healthy people; there is less evidence of its effect in people with pre-existing CVD although guidelines recommend it, and, until now, no study has compared the beneficial effect of physical activity between people with and without CVD.

Researchers led by Dr. Sang-Woo Jeong, a cardiologist at Seoul National University (Seoul, Korea), looked at data from a total of 441,798 people enrolled in the Korean National Health Insurance Services Health Screening Cohort, who underwent a health screening programme between 2009 and 2015 and completed surveys on physical activity. The participants were aged over 40 years, and the average age was 60. A total of 131,558 had CVD and 310,240 did not; 53.5% were men. The participants were followed for nearly six years, and information on deaths and causes of death were collected from the Korean National Death Index.

The survey on physical activity asked them to remember how much physical activity they had undertaken in the past seven days and this information was converted into units of metabolic equivalent task (MET) minutes per week (MET-mins/week).

By the end of the follow-up period, the researchers found that people with CVD benefited more from physical exercise than did those without CVD; for every 500 MET-mins/week the risk of death was reduced by 14% and 7% respectively.

The researchers believe their findings can apply to other people in other countries as the role played by physical activity in CVD is common to all populations.

Dr. Kang said: “There may be several plausible explanations for why people with CVD benefited the most from exercise. First, sedentary lifestyle is a well-known risk factor for CVD. Patients with CVD may have had sedentary lifestyles, and thus changing their lifestyle to become more physically active may be more beneficial. Secondly, a number of previous studies have shown that physical activity helps control cardiovascular risk factors such as blood pressure, cholesterol and blood glucose. The benefit of physical activity in secondary prevention may come by better controlling such risk factors. Lastly, patients with CVD usually have higher levels of systemic inflammation than those without CVD, and there is evidence that physical activity lowers systemic inflammatory levels.”

As a result of their findings, Dr. Kang said: “Doctors should emphasise the importance of a physically active lifestyle for patients with cardiovascular disease. They should be encouraged to maintain as much physical activity as possible. People who are physically active sleep better, feel better and function better. We would like to stress that physical activity is an economic way to live longer, healthier and happier, with little adverse effects.”