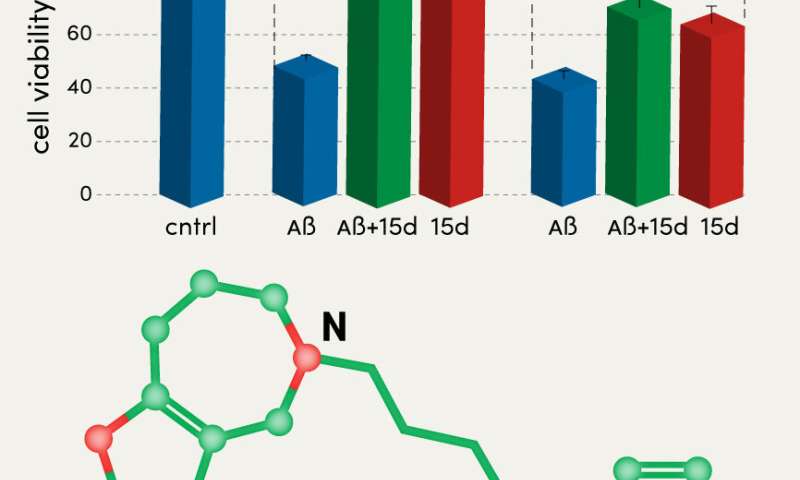 Biochemists from RUDN University (Russia) and the University of Bari (Italy) report a group of compounds that can become a molecular scaffold for new drugs for Alzheimer’s disease. They have demonstrated that derivatives of 1,2,3,4,5,6-hexahydroazepino[4,3-b]indole, or HHAI, are effective inhibitors of acetylcholinesterase and butyrylcholinesterase—enzymes whose increased activity can worsen the condition in this disease. The article is published in the European Journal of Medicinal Chemistry.

According to the World Alzheimer Report 2018, Alzheimer’s disease will affect more than 130 million people by 2050. Patients develop beta-amyloid plaques as the aß peptide aggregates in their brain tissue, and the concentration of acetylcholine, a neurotransmitter, decreases. Acetylcholinesterase and butyrylcholinesterase enzymes destroy acetylcholine, and their inhibitors are approved for symptomatic treatment of the disease in the early stages. However, the search for effective drugs continues.

“A comprehensive approach is used for the treatment of Alzheimer’s syndrome because one drug simply can not cope with many organic disorders accompanying dementia. This is the main problem with creating new drugs that can reduce Alzheimer’s disease syndromes: it is necessary to create a drug that will be effective for several purposes and at the same time will be relatively safe for the patient,”—said study co-author Leonid Voskressensky, Dean of The Faculty of Physics, Mathematics and Natural Sciences of the RUDN University, doctor of Chemical Sciences.

Voskressensky and his colleagues synthesized two dozen derivatives of 1,2,3,4,5,6-hexahydroazepino[4,3-b]indole (HHAI). Previously, the compounds of this group were found to be able to selectively suppress the enzymes’ activity that destroys acetylcholine. The authors concluded that HHAI can serve as a basis for the synthesis of new butyrylcholinesterase inhibitors.

Chemists evaluated in vitro inhibitory activity for all HHAI derivatives, comparing them with galantamine and donepezil—two registered drugs for Alzheimer’s disease. Scientists tested five compounds with maximum activity for the ability to inhibit the formation of beta-amyloid aggregates that form plaques.

For one of the most powerful inhibitors, compound 15d, researchers built a computer model of molecular docking with human acetylcholinesterase and butyrylcholinesterase to show how it binds to these enzymes. The model analysis demonstrated that the aromatic sites orientation of the active center during docking and the configuration of hydrogen bonds make the 15d compound the strongest and most selective inhibitor for these enzymes.

Compound 15d also demonstrated protective properties against neurotoxic action of beta-amyloid and oxidative stress, which damages cells, in the SH-SY5Y cell line. According to the authors, due to its additional protective properties, this compound can be a promising candidate for pharmacological tests in vivo.