The use of nutritional interventions in the prevention or treatment of dementia is extremely promising because of the low cost, simplicity, acceptability and safety.

Coconut oil may represent a cheap and natural treatment for dementia. This is because coconut oil contains medium-chain triglycerides (MCTs), which are digested to ketones in the liver. Ketones are normally produced in the body during the conversion of fat to energy, which is needed to prevent neuron degeneration. 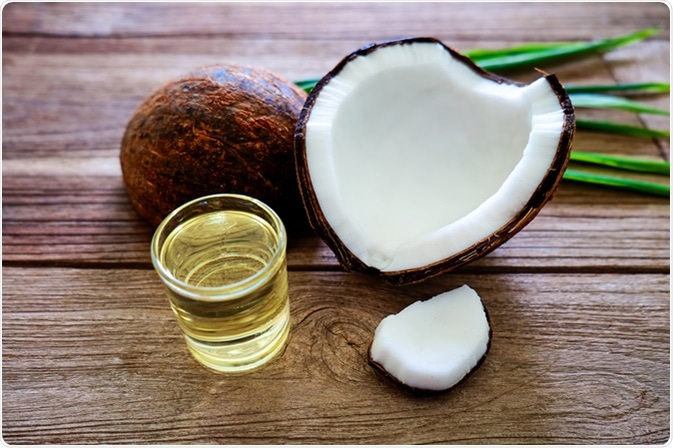 The typical primary source of energy for the brain is glucose. However, it is believed that in Alzheimer’s disease, neurons are no longer able to metabolize glucose because they develop a state of insulin resistance. This causes them to lose function and eventually to die.

On the other hand, the availability of ketones could provide an alternative energy source for the brain to function effectively. The importance of coconut oil is that MCTs act to increase ketone levels in the body even without much dietary alteration.

A ketogenic diet, or fasting, would otherwise be necessary to achieve this alteration. Moreover, lauric acid, which is the predominant fatty acid in coconut oil, has been demonstrated to cross the blood-brain barrier and stimulate ketogenesis within the brain astrocytes.

Why is glucose metabolism important in dementia?

Compelling evidence has linked dementia to diabetes, which is a disorder that involves resistance to or reduced production of insulin, the main hormone required for conversion of glucose to energy. The development of dementia is linked to localized insulin resistance in the brain cells, resulting in synaptic failure and eventual cognitive decline.

According to this theory, dementia patients experience a lack of glucose supply to the brain neurons. This is confirmed by brain imaging scans, which show significantly reduced glucose uptake in the neuronal areas affected by Alzheimer’s disease.

This means that an alternative source of energy is required to prevent neuronal degeneration in the absence of sufficient glucose. Normally during situations of glucose deficiency, e.g. during times of extreme fasting, the brain relies on ketones to provide energy.

Researchers have therefore suggested that a diet consisting of very little carbohydrate/sugar and very high amounts of fat from coconut oil could improve cognition in dementia, by increasing the use of ketones rather than glucose as the source of energy for the brain.

What evidence is available for coconut oil and dementia?

Currently, there is little research investigating the potential use of coconut oil as treatment for dementia.

A video recounting an anecdotal improvement in cognitive function in a patient with early-onset Alzheimer’s disease following the inclusion of coconut oil in his diet has largely been responsible for the sudden recent surge of interest in this treatment approach. The caprylic acid in coconut oil is cited as the factor responsible for this benefit.

This is supported by a single Spanish study assessing the cognitive impact of coconut oil. 44 patients with Alzheimer’s disease were administered either 40ml of coconut oil daily or a placebo over 21 days. It was observed that the patients who received the coconut oil significantly improved in certain cognitive domains like orientation and language skills.

Coconut also contains several cytokinins and plant phenols that help to inhibit the aggregation of beta-amyloid in the brain, which is a key characteristic of brain deterioration in the commonest form of dementia, namely, Alzheimer’s disease.

Other evidence suggests a positive role for coconut in inhibiting the development of obesity, dyslipidemia, insulin resistance and elevated blood pressure, all of which increase the risk of dementia.

In the absence of more substantial evidence from clinical trials, it is not possible to recommend the use of coconut oil as a treatment for dementia at present. It is already known that the positive metabolic effects of coconut oil in the prevention of dementia are seen only in ApoE-negative patients.

Several studies indicate that the intake of virgin coconut oil is associated with improved blood HDL cholesterol parameters with unaltered total cholesterol, LDL cholesterol and triglyceride levels, and so far no harmful effects of coconut oil on lipid metabolism have been definitively demonstrated.

This may be explained by the fact that MCFAs are rapidly absorbed from the gut without pancreatic lipase activity, and are rapidly oxidized in the liver to produce energy. Thus they do not give rise to cholesterol and are not deposited in adipose tissue.

Very large amounts of coconut oil may produce other unknown effects which could be detrimental to health. Conflicting results have been obtained in various trials, so that the jury is still out on the metabolic effects of coconut oil.

Although coconut oil may offer several benefits in acting as an energy fuel for the brain, more research is necessary to confirm its safety and efficacy in the prevention and treatment of this condition.