Sleep deprivation is a very common phenomenon in the US, mostly by choice, due to working or study conditions which are not conducive to getting adequate sleep. Most people who do not get enough sleep complain of fatigue and daytime sleepiness. However, research shows that the consequences of sleep loss go beyond this to many chronic metabolic disorders and psychiatric conditions. 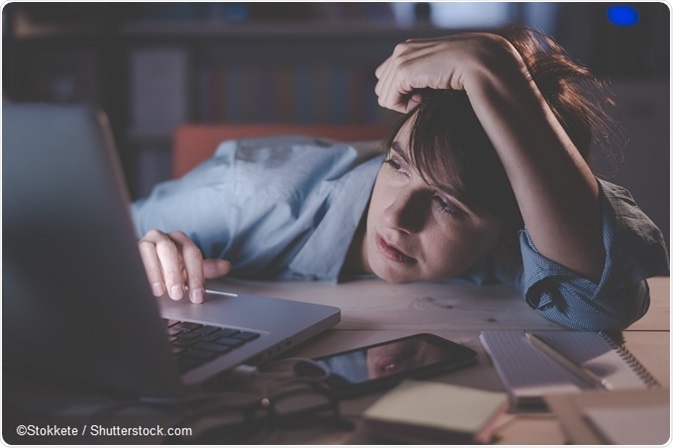 Sleep loss leads to psychological distress and depression. Conversely, daytime sleepiness and sleep problems are likely to be increased in those patients who suffer from depression, anxiety, bipolar disorder, and certain other psychiatric conditions. Thus there is continuing debate on whether insomnia and sleep loss is a result or cause of depression. Both are likely, for studies show that many of these conditions arise directly because of insomnia or disturbed sleep. Thus treating the sleep disorder may be of great help in alleviating the mental disorder.

Good sleep has many physiological functions, such as helping the brain recover its energy levels, file away necessary information while deleting irrelevant details, helping deal with emotional and mental challenges so as to renew the mind and emotions before the next bout, and fostering mental positivity and strength.

Sleep normally occurs in the form of several sleep stages, which together occupy one cycle of approximately 90 minutes. The length of each stage changes with progression through the cycles during the night. Thus the sleep experienced in the last few hours is different in quality from that which occurs in the early hours of sleep.

During deep sleep, the last stage of non-rapid eye movement (NREM) sleep, the individual becomes cool, flaccid, relaxed, and shows slow breathing and heart rate. This helps produce a feeling of rest and renewal of strength upon waking. The immune system also shows specific changes that are beneficial to the whole organism.

In contrast, during REM sleep, dreams occur, but the muscles are paralyzed, leading to the term ‘paradoxical sleep.’ The body temperature, and other vital signs, all rise during this stage. It is during this time that memory consolidation and long-term learning occur, and emotional reactions are worked through.

Lack of proper sleep causes dysregulation of all these processes, leading to fragility of emotions, cognitive deficits, and memory impairment. In individuals who are at risk of psychiatric disease, such changes may precipitate abnormal mental and emotional states leading to neuroses and psychoses. The resulting insomnia or sleep changes worsen the person’s condition still further, initiating a vicious cycle. The extent of overlap between the subjects with psychiatric and sleep disorders have led to intensive investigation as to the link between them.

Up to nine of every ten patients with major depression complain of sleep problems, mostly insomnia, but sometimes obstructive sleep apnea, which may occur in a fifth of these subjects.

Insomniacs have a four-fold risk of developing major depression within three years. In some studies, it was found that in people who subsequently had a diagnosis of depression, the sleep disorder was the earlier symptom.

Furthermore, if a depressed patient could not gain adequate restful sleep, recovery in response to therapy was less likely than in those who could sleep better, and relapses were more common. Suicidal thoughts and actions, as well as mortality due to suicide, were increased in insomniac depressives. Sleep disturbances, whether shortening or lengthening sleep, significantly impaired the quality of life and were uniformly described as causing great distress, which may account for this finding.

On the other hand, it has also been found that about 40 percent of young adults with depression slept too long, but only ten percent of older depressives. Females were more likely to have such long sleep. Another finding was that the nature of sleep was also altered, so that even long or normal sleep length might result in wakening but not feeling refreshed. Early morning wakenings or interrupted sleep with annoyingly long intervals of wakefulness were also reported. Total sleep time was usually reduced, and sleep onset was delayed. REM sleep showed the most changes.

Slow-wave sleep was often decreased, when the subject was depressed, and this might be linked to the anterior cingulate and orbitofrontal blood flow abnormalities seen in these individuals. This may also be a sign of broken sleep.

The occurrence of disturbed sleep should therefore not be taken lightly, because the decrease in subjective sleep quality is often the first sign of the onset of recurrent or new-onset depression. Additionally, sleep disorders should be treated appropriately in order to remove this risk factor for relapse, to optimize response to therapy, and to prevent suicidal impulses and actions.